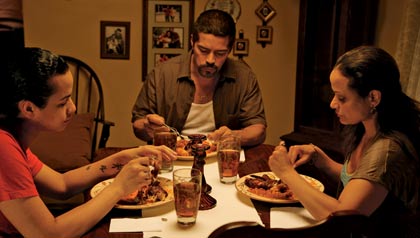 En español | In the new film Gun Hill Road, Esai Morales plays a convict who, after three years in jail, returns to his Bronx home and finds that his wife (Judy Reyes) is emotionally distant and his teenage son (newcomer Harmony Santana) leads a secret life: He's a transvestite who performs at a local club, is coming out as a gay man and ultimately wants to have a sex-change operation. Morales's character tries to interest his son in sports and takes him to a hooker to lose his virginity, all to no avail.

See also: Hispanics and the Fight for LGBT Civil Rights.

"Latino men feel betrayed by sons who don't live up to the expectations that society and the family have for them," says Morales about his role in the movie. "It's a challenge — not only to my character but to an audience — to say people are what they are and not ready to be put in some category."

A challenge that writer-director Rashaad Ernesto Green was eager to confront in his first feature film. The movie's themes, he says, stem from a relative who struggled with a similar transition with his own child. "There's a whole machismo thing that happens in our culture," says Green. "Our sight is colored by this idea of manhood. What I want to illustrate is that we should investigate what we're taught so we can open our hearts and minds to people who are different."

The film doesn't shy away from the seamier aspects of this story; it is explicit in language, violence and sexuality, and dabbles in honest, if sometimes bigger-than-life, emotions.

But if Gun Hill Road, which is well-acted, sometimes suffers from an excess of sincerity and melodrama, that's okay. It's an honest look at macho culture and how it deals with young people who happen to be lesbian, gay or transgendered. The story is not new, but it deserves to be retold.

"When you deviate from the norm, we as a culture want to smack you back into place," says Morales. "And that's just old school. What this movie shows is that love is the only thing that needs to be applied."