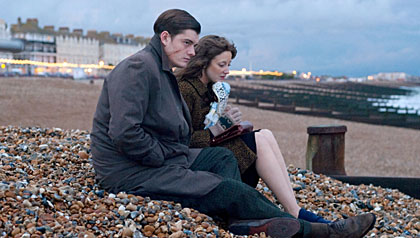 En español  |  A beautiful film about ugliness and betrayal, Brighton Rock proves that the power of film noir didn’t die with John Huston.

Written and directed by Rowan Joffe — screenwriter of the minor masterpiece The American, which restored George Clooney’s reputation as a great screen actor — Brighton Rock is the pitch-dark story of a British punk, his delusions of gangster grandeur and the innocent girl whose life he ruins. But so masterful is Joffe’s treatment of the story, and so focused are the performances by his stellar cast, that when the lights go up our unexpected instinct is to want to spend even more time with these characters — the good, the bad and the unbearably ugly.

Bill Newcott on Brighton Rock
Helen Mirren tells AARP it was the movie’s first-time director’s unique vision that attracted her to the project. Listen

Brighton Rock is based on — and sticks very close to — a 1947 British melodrama written by the estimable team of Graham Greene and Terence Rattigan and based on a novel by Greene. Wisely Joffe lets those two giants have their way most of the time, up to and including the film’s shattering final scene. But he shifts the action to a very specific place and time: the mod and rocker riots of the early 1960s. You may remember that just about the time we on this side of the Pond were falling in love with the Lads from Liverpool, British society was suffering enormous angst over a violent clash between two youth groups: the Rockers, who wore leather jackets, listened to ’50s rock and rode motorcycles; and the Mods, who wore neat suits and ties, listened to The Who and rode scooters. In all probability, the feud was stoked and exaggerated by the British press (who, believe it or not, were at the time noted for their tendency to sensationalize things). But there were riots in Britain’s beach communities, including Brighton, and it is against that background that Joffe sets his retelling of the tale.

Pinkie, played with dead-eyed detachment by Sam Riley, is a young small-time thug with dreams of becoming king of the underworld in Brighton — which I suppose would be somewhat akin to aspiring to run the mob in Myrtle Beach, South Carolina. Even so, Pinkie lacks the cool control of the town’s current Mr. Big, the oily Mr. Colleoni (Andy Serkis, for once allowed to act in the flesh, as opposed to his digital turns as Gollum in the Lord of the Rings films and the smart chimp Caesar in the current sci-fi flick Rise of the Planet of the Apes). To make matters worse, Pinkie recently lost his composure during a routine shakedown of a hapless debtor and killed the poor guy. And to make matters super-duper worse still, there’s a witness who saw him with the victim: a sweet local waitress named Rose, played with heartbreaking innocence by Andrea Riseborough.

Pinkie’s bosses want him to kill Rose, but after he engineers a date with her, Pinkie comes up with another plan: He’ll woo the girl and marry her so she’ll never be able to testify against him. It’s an odd strategy, true, but it seems to be working — until Rose’s boss Ida, a street-smart restaurant owner played with gutsy authority by Helen Mirren, gets wind of what’s going on. She becomes Rose’s fierce defender, standing up to Pinkie and virtually leveling him with a spitting, furious tirade.

In the great sweep of history and humanity, the characters of Brighton Rock are small potatoes. Yet their emotions roar along at a fever pitch, and the seaside settings, particularly the town’s majestic Victorian pier, provide a spectacular backdrop. Pinky’s delusions of power, Mr. Colleoni’s ridiculous sense of self-importance, even Ida’s grand goal of saving Rose from herself are all-consuming passions. It’s this operatic quality that makes Brighton Rock riveting, a small story told as an epic tragic drama.