The stakes in this sequel to the 2010 film Red, which turned some of our favorite aging Hollywood icons into still-credible action stars, are higher than they were the first time out.

The landscape is grander, with our motley crew of "retired, extremely dangerous" CIA agents hopscotching the globe, from Middle America to Europe to Russia. And the firepower — nay, the violence — is more explosive still. Yet all the extras somehow detract from what was so charmingly thrilling about the original Red, with clever interplay between the characters and a plot that you could follow. 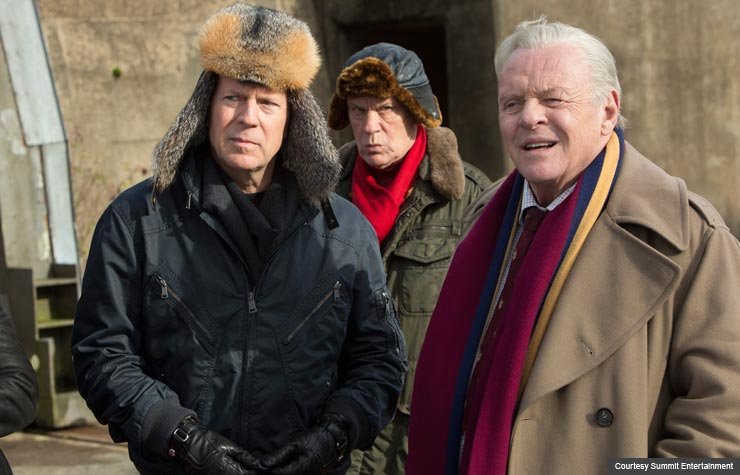 Red 2 begins with former black ops agent Frank Moses (Bruce Willis) settling into domesticity with his civilian girlfriend Sarah Ross (Mary-Louise Parker). Worried that her guy isn't seeing enough "action," Sarah is thrilled when Frank's old sidekick, Marvin Boggs (John Malkovich), shows up claiming that Interpol is in pursuit of them. Seems a nuclear weapon known as Nightshade that Frank and Marvin inadvertently smuggled into Russia years before is at risk of going off, and they're going to be blamed if they can't stop it.

It's a puzzling enough initial premise, and the plot considerably and confusingly thickens as Frank's and Marvin's former partner Victoria (Helen Mirren) takes a place in the posse threatening to kill them, along with Frank's old flame Miranda (Catherine Zeta-Jones, new to the cast this time) and the hired assassin Han (Korean star Byung-hun Lee). None other than a mad scientist introduced, literally, as "Hannibal Lecter meets John Nash" (Anthony Hopkins, another sequel addition), is brought in to save the day, because he, in the late stages of dementia, apparently knows the whereabouts of Nightshade.

While writers Jon Hoeber and Eric Hoeber adroitly penned the first Red, their sequel script is full of holes so big you could shoot AK-47s through them. And despite a set-up of a ticking time clock counting down to global annihilation, the dramatic suspense fizzles.

While the plot of the original Red may not have hung together perfectly, it was sustained through humor, accomplished thanks to quirky character development and the believable interrelationships of the players.

In Red 2 both Parker and Malkovich are inherently funny with their own versions of oddball physical comedy, but Bruce Willis is consistently flat, his chemistry with Parker and Zeta-Jones nonexistent. And Hopkins' role is so stupidly drawn that there's little he can do with it. New director Dean Parisot (of Galaxy Quest and Fun with Dick and Jane) even fails to elicit electricity from the brilliant Mirren, and spotlights Han on camera in such a heavy-handed way as to make him a caricature.

Worst of all, the violence is unrelenting and gratuitous. Not to get too much on a high horse, but in this day, marked by such sad news stories as the Aurora, Colo., theater shooting; the Newtown, Conn., school shooting; and the Trayvon Martin shooting in Florida, why would anyone want to pay to go to a theater to watch relentless shooting?

It's too bad that the "grownups" in this Movie for Grownups didn't call for a little restraint.

Meg Grant is West Coast editor for AARP The Magazine.