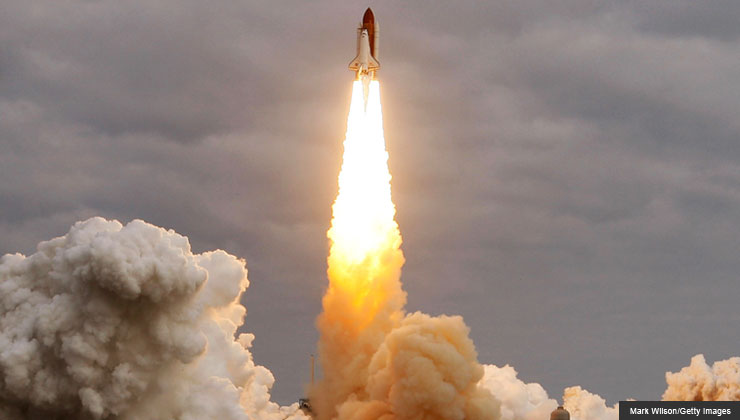 Space shuttle Endeavour lifts off from launch pad 39A at the Kennedy Space Center, on May 16, 2011 in Cape Canaveral, Florida.

En español  |  When it comes to the space shuttle, I was lucky enough to be in the right place at the right time — and more than once.

In 1978 I was a cub reporter in Downey, Calif., where I got to interview then-and-now Gov. Jerry Brown standing next to a full-scale shuttle mock-up at the old Rockwell assembly plant there.

My in-laws, who lived in Downey, happened to be friends with a guy who helped design the explosive bolts that would release the unpowered shuttle Enterprise from its airliner carrier above the California desert, and so on Aug. 12, 1977, I got to cover that first test flight near Bakersfield.

A series of apparent misunderstandings led to me becoming "Space Editor" for National Geographic Magazine during the 1990s. There I got to write about John Glenn's return to space aboard the shuttle in 1998. I spent time with Glenn during his training in Houston and I actually got to sit in the pilot's seat aboard the Johnson Space Center's training shuttle.

Finally, for Glenn's launch, I sat at the water's edge at Cape Canaveral, the closest living being to Launch Pad 39B, and felt the shock wave of the giant engines pound against my chest.

As a film writer, I've always perked up when moviemakers employed the shuttle in their pictures. Aside from starring roles in some truly awe-inspiring IMAX movies, among them Hubble 3D and Space Station 3D, the shuttle has played a supporting character in any number of sci-fi and action fantasies.

Admittedly, many of those films don't merely border on the ridiculous, they cross the border and become naturalized citizens. Still, from the first moments the shuttle's sleek black-and-white lines cruise across the screen, you just have to marvel at its once-in-a-lifetime convergence of science, engineering and beauty.

NASA will launch its final flight Friday, but the shuttle will live in movies forevermore. Here are five in which it shines (even if the rest of the cast does not). 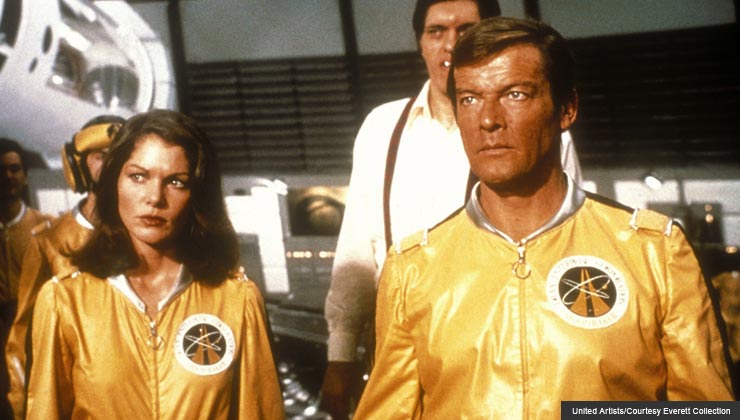 The real shuttle was two years from liftoff when James Bond (Roger Moore) jumped the gun — and nearly jumped the shark — by taking his exploits to outer space. In a startling opening sequence, the Villain of the Moment (Michael Lonsdale as Hugo Drax) steals a shuttle as it's being transported across the Atlantic atop a Boeing 747 (for reasons never really explained, the shuttle, "on loan" to Britain from the U.S., has been strapped to the back of an airliner fully loaded with fuel).

It turns out Drax is building his own fleet of shuttles with an eye on — and this will come as a surprise to you — world domination. But thanks to Bond's heretofore untapped astronauting skills, 007 and his beautiful sidekick, Holly Goodhead (Lois Chiles), somehow manage to pilot themselves to the villain's outer space hideout, destroy everything and, in JFK's immortal words, "return safely to earth."

For moviegoers, Moonraker's flat-out buffoonery was forgiven in light of its spectacular sneak preview of the shuttle era. 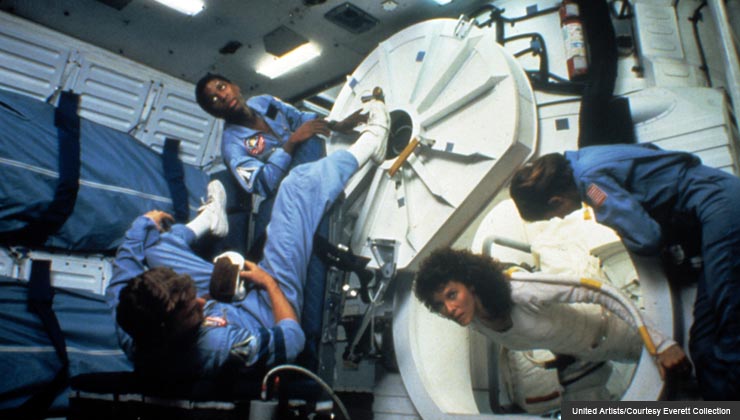 You have to pity the producers of Space Camp, who in June of 1986 — barely six months after the shuttle Challenger had exploded on launch — tried to sell America on a lighthearted adventure about some teenagers who are accidentally launched aboard a space shuttle. It was too soon for a movie about children pushing the buttons of a space shuttle; it was more the stuff of black comedy than summer enchantment.

It's no surprise that America, still heartsick over Challenger, abandoned the Space Camp ship, despite a cast of then-and-future stars, including Lea Thompson, Kelly Preston, and Joaquin Phoenix as the kids and Kate Capshaw as their reluctant adult pilot.

Nearly a quarter-century later, though, it seems OK to bring children back aboard a shuttle, and Space Camp succeeds at being what it was intended to be: A kids adventure novel come to life, placing youngsters in the unexpected roles of grownups and enabling them to prove to the world, and themselves, that they have what it takes to succeed in life.

It requires not one, but two space shuttles to save the Earth from a killer asteroid — and that doesn't include the one that gets torn to shreds by meteors in the opening moments. In Armageddon, NASA even launches both rescue shuttles at the same time, quite a feat for an agency that seems to have trouble getting just one off the ground on schedule. Bruce Willis is on board as an oil drilling expert whose job it is to plant a nuclear bomb deep within the asteroid. Upon exploding, according to the plan, the bomb will rip the thing in two, sending both halves floating harmlessly into space. Of course, almost nothing goes right, and last-minute heroics are in order from Willis, who does everything but yell "yippie-yi-yo-ki-yay!" as he singlehandedly saves humankind from oblivion.

Political Sidenote: In the general election for 1998 president in the movies, Armageddon's Stanley Anderson, a fine actor, nevertheless loses in a landslide to Morgan Freeman, who held the world's hand as president in the similarly plotted sci-fi thriller, Deep Impact. 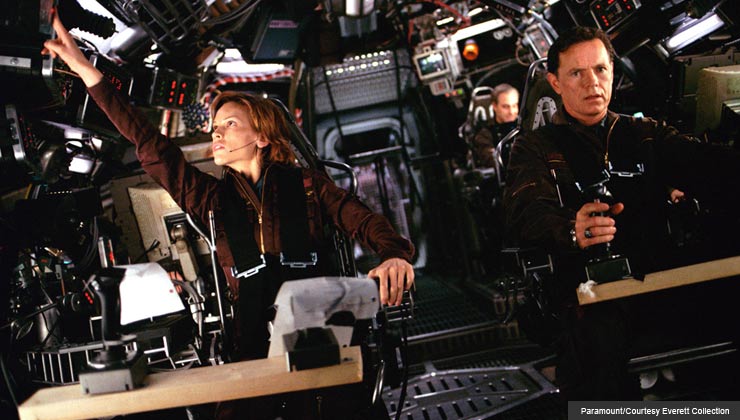 Hilary Swank stars with Bruce Greenwood in The Core.

The most patently ridiculous big-budget sci-fi movie of the past decade — the story of a crew venturing to the center of the Earth in order to kick-start the planet's magnetic field — opens with the most over-the-top shuttle adventure ever. For reasons that were clear at the time, but which I've frankly forgotten, shuttle commander Robert Iverson (Bruce Greenwood) is forced to set the craft down in the Los Angeles River (after first buzzing Dodger Stadium). As a reward for endangering the lives of millions instead of ditching the shuttle in the nearby, hard-to-miss Pacific Ocean, Iverson gets the assignment of a lifetime: piloting a giant drill made of a melt-proof metal called unobtanium (a name worthy of Rocky and Bullwinkle, who famously owned a deposit of the top-secret weightless element upsidasium). 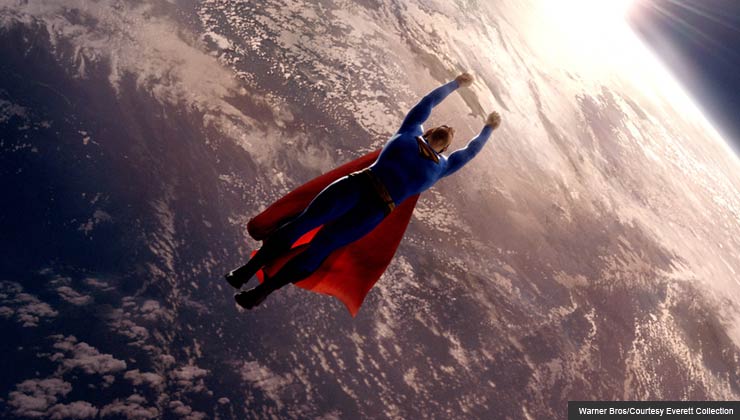 This may be the last notable appearance of the shuttle in a Hollywood movie — and it's a doozy. In a revolutionary launch strategy, NASA, clearly failing to learn from its disastrous experience in Moonraker, attempts to send a shuttle roaring into space from the back of a 747. But the explosive bolts fail (prompting an angry call, I suppose, to my in-laws' old friend back in California) — and the shuttle, still attached to the plane, heads for the ionosphere. Fortunately, Superman has just returned from a five-year hiatus in search of his roots on Krypton. He flies to the rescue, separates the shuttle from the plane and brings the crippled airliner to a safe landing in Dodger Stadium, which, in retrospect, seems to be located in the Bermuda Triangle of shuttle-related mishaps.