“Mountaintop removal” is a phrase that, to the uninitiated, sounds like nonsense. The top is the only part of a mountain anyone really sees or remembers. That iconic Paramount Pictures logo is a snowy mountain peak — not a sawed-off stump. Mountaintop removal? Why would anyone want to do that?

The Last Mountain, a haunting documentary that chronicles the mining industry’s ongoing quest to extract every last piece of coal from the Appalachian Mountains, has the answer to that question, and it’s a painfully obvious one: money. The movie centers on the plight of the residents of West Virginia’s Coal River Valley as they try to stop the practice of mountaintop removal, in which a mountain’s peak is blasted away by dynamite in order to extract the precious coal layered underneath.

Like any respectable piece of agitprop filmmaking, The Last Mountain is less a movie than a polemic. Director Bill Haney unapologetically offers no nod toward impartiality. He’s on the side of the residents who are choking on the toxic dust from the mountains being bombed all around them — and, at least in one trailer park, dying of brain tumors at an abnormally high rate. And, after Haney skillfully opens the film with dramatic footage of titanic blasts that seem to suck the picturesque mountain peaks right into the earth below, there likely won’t be many in the audience ready or willing to listen to the excuses of the mining industry.

The movie is at its best when it focuses on the locals affected by those constant blasts — a woman whose groundwater has been tainted by the runoff from the mountains (the image of her well filter, brown and corroded after only a week’s time, is hard to shake); a man crusading for a new elementary school to replace the one his granddaughter attends, which sits next to a coal processing plant and a lake of sludge; a miner who routinely puts in 16 hours a day toiling underground and after 30 years still makes just $15 per hour for his efforts.

Less effective is the extended spotlight given to Robert Kennedy Jr., who has lent his fame and influence to the Coal River Valley cause. Though certainly a committed environmentalist, Kennedy’s appearances have the effect of turning the documentary into an infomercial — suddenly, this cause has a celebrity pitchman, and it doesn’t really need one. 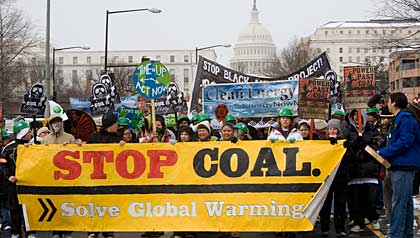 There’s a priceless moment where Kennedy visits an old man who has stayed in place as the entire small town around him has been “depopulated” — one of the movie’s saddest terms — due to disappearing jobs and deplorable environmental conditions. “I never thought I’d have a Kennedy in my home,” the man says, and it’s hard to tell if he’s starstruck or horrified.

Haney, though, is clearly a bit starstruck, and the film’s final section turns into something that feels like a PSA for wind farming, one of Kennedy’s pet causes. It’s an important point to make — if the endgame is to stop this form of coal mining, there needs to be something to replace it as an energy source — but the movie’s picture of wind turbines as a perfect solution feels a little too easy and unexamined.

The film’s case against mountaintop removal, however, is convincing and altogether terrifying. The local protestors who are fighting the practice are the movie’s true heroes, and at the end there are hints that they may actually conquer their metaphorical mountain. Whatever happens, it’ll be hard for anyone to walk out of The Last Mountain and not be angry — at the executives who run Big Coal, and at the politicians on both sides of the aisle who are happily subservient in exchange for campaign donations.