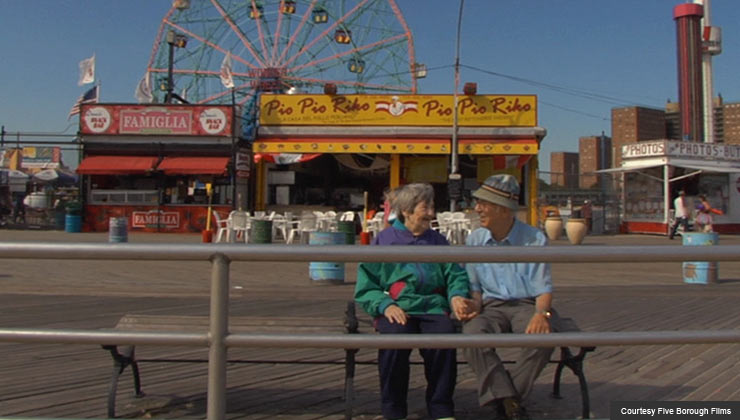 Albert, 79, and wife Marion, 89, star as one of the five couples documented in Love Etc.

How about this: a documentary on a genuinely pleasant subject — love — with no agenda other than exploring that since-the-beginning-of-time urge for romance in humans? Love Etc., Jill Andresevic’s feature directorial debut, brings us five distinct contemporary narratives as her cameras dip into the lives of diverse New Yorkers in various stages of the pursuit of love over the course of a year. We witness the optimism of young love, the frustration of unrequited love, the satisfaction of time-tested love.

While the film meanders through different boroughs of New York, and sometimes tries too hard to underscore the importance of its Big Apple setting, this a movie that would have worked in any number of urban settings because it satisfies thanks to its diverse subjects and the authentic stories they tell.

The idea for the film came from Executive Producer Jonathan Tisch — who, while waiting in line with his fiancée Lizzie for a license at the Marriage Bureau in Manhattan, was amazed at the wide variety of couples there, all unified by their optimistic belief in love. Set free to find her subjects throughout the city, Andresevic gained almost unfettered access to those she settled on, bringing us into their daily lives at intimate moments without seeming obtrusive or voyeuristic. We spend lazy afternoons with 18-year-olds Gabriel and Danielle, who are enjoying their first serious relationship, all the while knowing that, come fall, they will be forced apart when each goes away to college. We experience the heightened anticipation of two traditional Indian families as they prepare for the finely choreographed wedding of Chitra and Mahendra, 28 and 29 respectively, then come down from the high as the newlyweds adjust to daily routine life together — just the two of them. We sit in a lawyer’s office and hospital nursery with Scott, 52, a gay theater and television director who, so far unsuccessful in finding a partner, has decided to hire a surrogate on his own and become single father to twins.

The two other stories Andresevic shares are even more powerful in their honesty. Ethan, 41, is a divorced construction worker raising two teenagers on his own. When Noah, his 14-year-old son, introduces him to a friend’s mother, Erika, Ethan’s heart skips a beat, and then the fantasy has to play out in reality in front of the kids. And Albert, 79, and Marion, 89, Brooklyn musicians who for 48 years have been happily married, still share their dream of producing a hit song. They’ll never give up on it, nor will Albert abandon his sweetheart, now that dementia has nearly overtaken her.

This is an optimistic film. It’s neither sugar-coated nor overtly cautionary, and we come away from these real-life portraits still believing in love. Andresevic has succeeded by not getting in the way of the ties that bind us. As Robert Browning once said, “Take away love, and our earth is a tomb.”