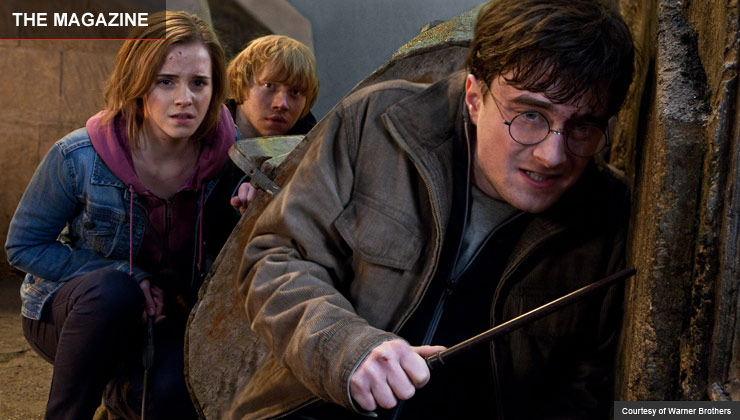 En español  |  Believe me, I’d like nothing more than to be the pooper at Harry Potter’s going away party, slumping in a corner, a noisemaker hanging from the corner of my mouth, muttering “That’s all very well, but really, who cares?”

That’s precisely where I found myself a few months ago, after watching the first installment of the Potter finale, Harry Potter and the Deathly Hallows: Part 1. That half-of-a-movie, clearly just a setup for this big finish, amounted to little more than two and a half hours of hanging with a group of mopey teenagers. Virtually absent were many of the wonderful veteran actors who have always provided the series with gravitas: Alan Rickman, John Hurt, and Julie Walters among them. The venerable Maggie Smith, as Hogwarts Professor Minerva McGonnagal, didn’t even appear at all. Part 1 ended with a shrug. I responded in like manner.

Potter’s loyal readers knew, of course, that the good stuff was all yet to come. And indeed, Harry Potter and the Deathly Hallows: Part 2 brings the series to a smashing conclusion. It is, miraculously, a movie that works on every level. Director David Yates does both the little things and the big things exceedingly well — from exploring the unfulfilled longings of a boy torn from his mother to igniting the pyrotechnics of an epic air/land battle. The end product is a film that will delight both avid Potterphiles of all ages and those who are coming to the party a decade or so late.

No need to cultivate familiarity with the baroque intricacies of author J.K. Rowling’s novels. Part 2 plays like a classic adventure film, heavy on the thrills and light on the exposition. All we need to know is that Harry (Daniel Radcliffe) is the good guy, the noseless Lord Voldemort (Ralph Fiennes) is the bad guy and there are opposing armies of light and darkness. In enjoying Part 2, I utilized the same viewer strategy I applied while watching the Lord of the Rings movies: Take your cues from the knowledgeable fans sitting around you. Cheer when they cheer, worry when they fall silent. There are some supposed twists at the end, with characters shuttling back and forth between the two sides, but really, the Potter films have always been pretty transparent when it came to telegraphing true loyalties. I’m not going to tell you where Snape (the invaluable Rickman) comes down in the end, but anyone who professes to be surprised really ought to get out and read some more books.

Rickman and his friends from the firmament of great British stars are all back for the last chapter, and they are wondrous to behold — especially Smith, who has it out once and for all with Snape, and Walters, who gets to dispatch one of the series’ more infuriating villains in a way delightfully in keeping with her Earth Mother character.

Rickman and his friends from the firmament of great British stars are all back for the last chapter, and they are wondrous to behold — especially Smith, who has it out once and for all with Snape, and Walters, who gets to dispatch one of the series’ more infuriating villains in a way delightfully in keeping with her Earth Mother character.

Judging by the distressed reactions of many of those around me, Part 2 depicts the violent ends of some treasured characters. For me, the action sequences were too frenzied to discern among them. But I didn’t care. Spectacular when it needs to be, introspective when it ought to be, Harry Potter’s sendoff makes even the most cynical observer long for another term at Hogwarts.