A tad too lengthy with fight scenes that last longer than the half-life of Kryptonite, the new Superman movie Man of Steel nevertheless gets a lot of things terrifically right.

Since his comic book debut in the 1930s, Superman has had the best-known genesis story outside the Bible (indeed, there are many who like to draw parallels between the two accounts). That's why film reboots of the Superman legend — and many superhero stories in general — can get dangerously bogged down in the first few reels. 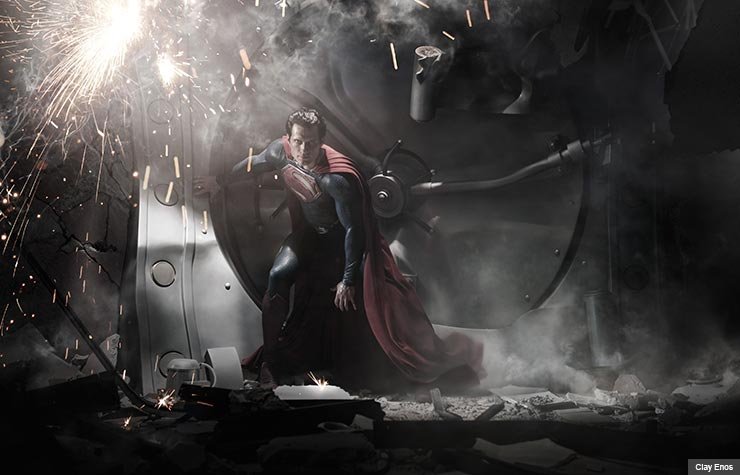 The story of how Superman's parents rocketed him off the planet Krypton moments before it self-destructed and how he was found and raised by a childless Kansas farm couple is as much part of American lore as George Washington chopping down a cherry tree (and probably just as true). But you can't begin to tell the story of Superman without plowing that familiar cornfield one more time.

Screenwriters David S. Goyer and Christopher Nolan (who resurrected Batman in 2005) have cracked that narrative nut nicely, opening with a thrilling sequence on Supe's native planet, then immediately introducing us to Clark Kent as an adult. The story of his early days on Earth are then told in flashback, punctuated by spectacularly staged set pieces of superhuman derring-do.

But if Man of Steel gets off to a rousing start, it soon becomes bogged down in its own determination to keep us from getting bored. It's not long before another set of Krypton survivors arrives on Earth, bent on destroying both Superman and his adopted human race, and from then on the battle scenes just keep coming.

Here's the conundrum: When one indestructible man gets into a fistfight with another indestructible man, how can either guy win? Director Zack Snyder just lets them duke it out, interminably so, laying waste on the city of Metropolis before finally, perhaps out of sheer exhaustion, ending it in an abrupt, utterly unsatisfactory twist.

You don't cast a project like Man of Steel lightly, and Snyder has done a nice job of filling the iconic roles.

Despite his British nationality, Henry Cavill, who played the handsome first Duke of Suffolk in Showtime's The Tudors, makes an authentically corn-fed Clark Kent — although Snyder does ask him to scream in anguish one or two times too many.

Amy Adams puts her perky spunkiness to good use as ace reporter Lois Lane. As Superman's Kryptonian dad, Russell Crowe is an anchor of wisdom and reassurance — and the script cleverly lets him hang around for most of the picture. I wish Laurence Fishburne had more to do as editor Perry White, but if there's a sequel, I expect him to be a larger factor. Diane Lane's Martha Kent provides Clark with the mother's love he needs.

However, my favorite performance in the movie is Kevin Costner as Superman's Earthly dad, struggling to help his son find a balance between his human- and superhuman-ness. And it can be no accident that the pair's most touching scene is played against a background of towering corn, a visual echo of Costner's Middle American classic, Field of Dreams.

At nearly 143 minutes, Man of Steel fails to merit its stay beyond two hours (the point at which I unfairly raise the bar for holding my attention). There's plenty to look at, but if it's plot development you crave, feel free to duck out for popcorn when the fists begin to fly.