Where do you want to go on your next vacation? Our Destinations area can help you decide.

On the surface, Buck is a study of horses, but it’s also a portrait of Buck Brannaman, a man who possesses a deep reserve of empathy that allows him to connect with four-legged creatures as well as the two-legged ones that ride them.

The 88-minute documentary follows Brannaman, who inspired the main character in the novel The Horse Whisperer, as he traverses the country, holding four-day clinics for horse owners seeking help with training. In scene after scene, he performs his alluring dance in dusty corrals and wind-swept pastures. Wearing fringed suede chaps and a cordless mike, he offers pearls of wisdom to the animals’ human keepers:  “A lot of times, rather than helping people with horse problems,” he says, “I’m helping horses with people problems.”  No boisterous Dr. Phil is cowboy Brannaman; his admonitions are often pointed but always quiet, sometimes diluted with smart humor. 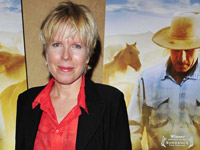 A New Career, Found On the Range
First-time moviemaker Cindy Meehl has a hit with Buck, her new documentary. Read

During the three months of each year that he’s not on the road, Brannaman, 49, lives with his wife and three daughters on a ranch in Sheridan, Wyoming. A student of the natural-horsemanship pioneers Ray Hunt and Tom Dorrance, Brannaman practices a method of training that calls for encouragement rather than punishment, and for earning a horse’s respect rather than “breaking” it. The film makes it clear that Brannaman applies the method in all his relationships.

What makes Brannaman so inherently good at what he does, we learn, is his own painful past. As a child, after the early death of his mother, he suffered horrific beatings and abuse by his alcoholic father. Ultimately, he and his older brother—both skilled rope trick riders—were placed in foster homes. (We meet Brannaman’s foster mother, with whom he maintains a close, loving relationship.)

Brannaman emerged from the ordeal a painfully shy person with an uncanny connection to horses. He forced himself to come out of his shell to share his gift with others and later consulted with director Robert Redford on the Horse Whisperer film.    (Redford praises Brannaman’s tactics in two scenes in Buck—the second one seeming a bit gratuitous.)

First-time director Cindy Meehl’s understanding of her subject’s character is what makes Buck work as a film. (It won this year’s Sundance documentary audience award.) Meehl, a horsewoman herself, brought in two skilled cinematographers—Luke Geissbuhler and Guy Mossman—whose camera work puts the viewer right there in the big country. While following Brannaman, she happens upon a dramatic session during which a young woman brings him her wild three-year-old stud. The horse has been known to attack cars, and it viciously bites one of Brannaman’s most skilled assistants when he attempts to mount him. “Your horse is a mirror to your soul,” Brannaman warns its owner, “and sometimes you may not like what you see.”  In a 10-minute scene that will break your heart, Brannaman gently lures—rather than forces—the horse into a trailer that will more than likely take him for euthanization. Lest we be lulled by the trainer’s success, the scene reminds us that life is also about failure.

You’ll walk away from Buck with a profound respect for the man, the horses he trains, and the fact that, for the people who attempt to harness them, it’s never too late to change.