The astoundingly talented Julianne Moore, so good in movies like The Kids Are All Right and The Hours, sadly seems to be settling of late, taking roles in movies that are beneath her. It's as if she, like her character Linda Sinclair in The English Teacher, has problems of low self-esteem.

Mind you, Moore brings all she's got to her portrayal of the 40-year-old (an annoyingly unnecessary discrepancy, as in real life Moore is 52) spinsterish high school English teacher in director Craig Zisk's feature debut, being released on Video on Demand as well as in select theaters. 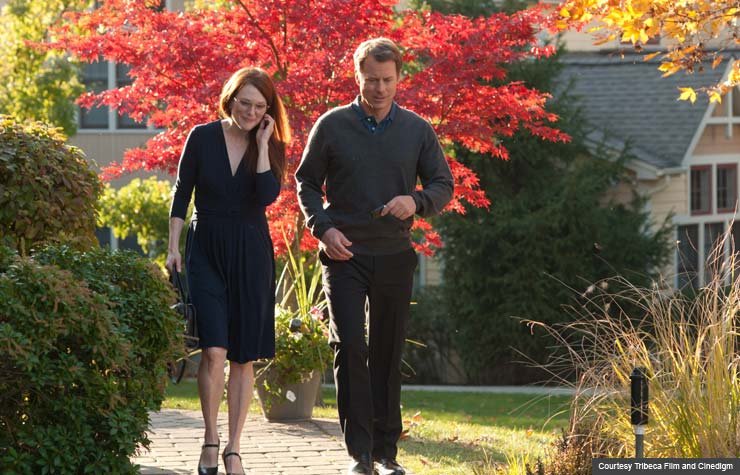 Julianne Moore and Greg Kinnear in 'The English Teacher.'

She creases her lips in just-so aggravation and does a bleary-eyed hustle of shame in front of students who've just learned of one of her private indiscretions, but her character is so stereotyped, and The English Teacher script (written by Dan and Stacy Chariton) so loaded with cliches and predictable plot lines, that even Moore's best efforts fall flat.

The themes in the movie, beyond a teacher-student romantic liaison, offer potential enough. The impact of great teacher-mentors, the common occurrence of censorship in schools and the pressure for students of the arts to conform to more traditional (or lucrative) careers all could have been more deeply mined. Instead, Zisk (known mostly for TV shows such as Parks and Recreation and United States of Tara) goes for a quick-moving narrative (thank God, in some ways), cheap laughs and cookie-cutter characterizations.

Moore's Sinclair, who's been a bookworm all her life, allegedly loves her work teaching Death of a Salesman and The Glass Menagerie to teens. Outside of the classroom, we are to assume that she hopes to hook up with a guy (note to writers: that's condescending) but when all her dates turn out to be duds, Sinclair contentedly curls up alone at home.

Enter Jason Sherwood (Michael Angarano of Almost Famous and Haywire), some years earlier a brilliant student of Sinclair's who has returned home to small-town Pennsylvania after supposedly failing as a playwright in New York City. Sinclair reads Sherwood's play, a dark family drama called The Chrysalis, and falls in love with it. (Start counting the minutes until the transference occurs.) She shares the manuscript with her colleague, drama teacher Carl Kapinas (more than once a joke is made about the pronunciation of his last name), played by the overly fey Nathan Lane.

Sinclair and Kapinas then join forces to convince their principal and vice principal (the very physically humorous Jessica Hecht of Sideways, and Norbert Leo Butz, who appeared recently in Disconnect) to allow them to make The Chrysalis into the next student theatrical production. Unbeknownst to Sherwood, who already is reluctant about the proposition, Sinclair and Kapinas agree to alter the play's violent ending on the ultimatum of their superiors.

My biggest problem (and there were several) with the film is that what we see of the play — the supposed work of a genius student — is utterly preposterous. A complete bomb! Couldn't the filmmaker come up with something better than nonsensical melodrama?

Meanwhile, I sort of enjoyed the main subplot, during which Sinclair enters into a sparring feud with Sherwood's dad, a physician played by the affable Greg Kinnear. Sinclair's got it in her mind that Dr. Sherwood is the model for the abusive father character in his son's play, and that now he's quashing Jason's creativity and forcing him to go to law school. As we all know, appearances are deceiving, and Moore and Kinnear actually create a sizzling on-screen chemistry.