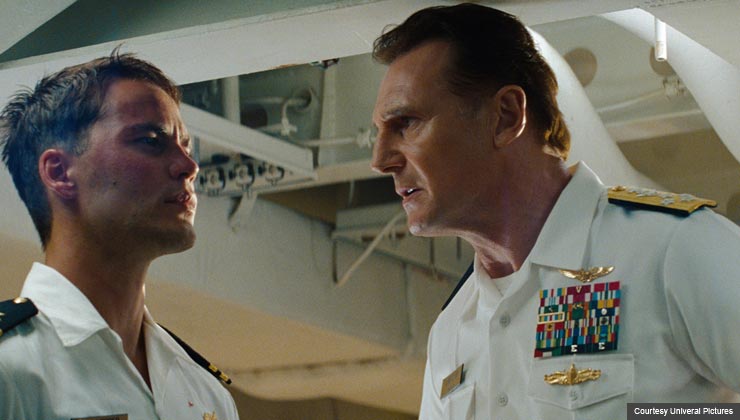 It's an estrogen-fueled weekend at the movies  — What to Expect When You're Expecting and Hysteria are, let's face it, aimed at the womenfolk — but at least we guys can enjoy Liam Neeson battling space aliens in Battleship.

Or can we? Liam's there in the beginning, all right, but he disappears as soon as the action starts — and by the time he pops up again, we're saying to ourselves, "Oh yeah, him!"

Still, there are plenty of explosions and alien encounters to be had — and there's even an AARP-appropriate Greatest Generation surprise at the end, the revelation of which would ruin the one real surprise in the whole movie. It's also fun to keep on the lookout for the several clever references to "Battleship," the classic board game on which the movie is, weirdly, based.

The action, acting and special effects are all very over-the-top, of course, with not one epic adventure cliché left untouched by director Peter Berg (who, ironically, directed the tightly focused, sadly overlooked comedy noir Very Bad Things back in 1998).

Then again, what would you expect from a film presented by Hasbro Studios?

Also of interest: The summer of grownup blockbusters. »