A darling of the Cannes Film Festival and the best-film winner at the Italian Golden Globes, the comedy/drama We Have a Pope sure looks like a good movie — with sumptuous Vatican sets, seas of scarlet-robed cardinals and the great 87-year-old French actor Michel Piccoli starring as the cardinals’ reluctant selection to be the next il papa.

Writer/director/costar Nanni Moretti seems to have all the right elements in place, but for whatever reason he fails to deliver an actual storyline to follow up on his promising premise.

The film opens in the aftermath of a beloved pope’s death. The College of Cardinals is locked into the Sistine Chapel, where they soon become deadlocked over the front-running candidates for succession (in a nice touch, we hear the men’s thoughts, virtually all of them praying, “Not me, Lord!”). Finally, they settle on the aged Cardinal Melville, who seems game until the moment before he’s supposed to step out to greet the faithful on that big balcony over St. Peter’s Square. With a pitiful scream, he declares he can’t go through with it and lurches from the room. Desperate, the cardinals bring in Italy‘s leading psychoanalyst, played by Moretti, to fix the new pope.

So far, so good. From this point, Moretti could have taken his story in any number of interesting directions. Trouble is, he doesn’t explore any of them. In fact, We Have a Pope soon becomes a disjointed series of set pieces: Melville escapes the Vatican in street clothes, wanders around a while, checks into a hotel (thank goodness he brought his American Express card) and falls in with a group of actors who are mounting a Chekov play. Meanwhile, the cardinals are all still back at the Vatican wondering what to do next. They play cards, argue among themselves and, at the urging of the pope’s psychoanalyst, mount a round-robin volleyball tournament that Moretti allows to consume more than 10 minutes of screen time.

I sat there wondering where Moretti would take his story. Would the pope become an actor? After all, the script goes to great pains to establish that the pope knows all the lines in the play. But no, he’s only an observer. As the pope wanders the street, will he be inspired by his contact with ordinary people to take up his responsibility on their behalf? Nope, he never really interacts with anybody.

Seeking out a second psychoanalyst, the pope begins to suspect that something in his past may be the secret to his anxiety. Up in the pope’s apartments, the Vatican PR guy, rather than admit to the cardinals and the world that the pope is missing, has stationed a Swiss guard to provide a shadowy presence behind the curtains, eating the pope’s food and watching his TV. 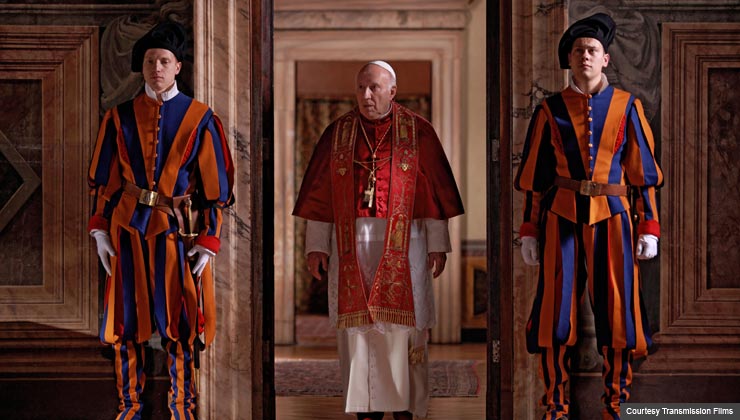 Michel Piccoli stars as a newly chosen pope with second thoughts about his powerful role.

Will he discover the repressed memory that triggered his panic attack? Um, no. Then I was hoping that Swiss guard in the papal apartments would somehow be accidentally revealed to the world, so the cardinals would have no choice but to create a backstory for him, announce him as pope and have the reluctant Melville serve as his behind-the-scenes mentor. I really liked that one.

But as the film wound down, I sadly realized that I was working a lot harder on this movie than Moretti was. I can’t remember a film that took so long and went down so many blind alleys only to deliver the central character to the exact same place he was when the story began. Seriously, you could cut We Have a Pope about 18 minutes in, splice it directly to a point three minutes before the end, and you would not have missed one second of character development.

Piccoli made his first movie in 1945, virtually as the Nazis were leaving Paris. He has worked with the likes of Jean-Luc Godard, Louis Malle, Alfred Hitchcock and Alain Resnais. If there’s a reason to see We Have a Pope, it is his remarkably measured performance. Behind the pope’s panicked eyes churn secrets and emotions only his tortured character can know. And that’s where they stay, because We Have a Pope’s weirdly constipated script refuses to let them out.