You won't laugh any harder at a theater this year than you will during The Incredible Burt Wonderstone, the dizzyingly funny story of the rise and fall and rise of a Las Vegas magic act. Refreshingly single-minded in its aim to entertain, Wonderstone has no social agenda, no artistic aspirations, no enduring lessons — other than, perhaps, the universality of lifelong friendship. 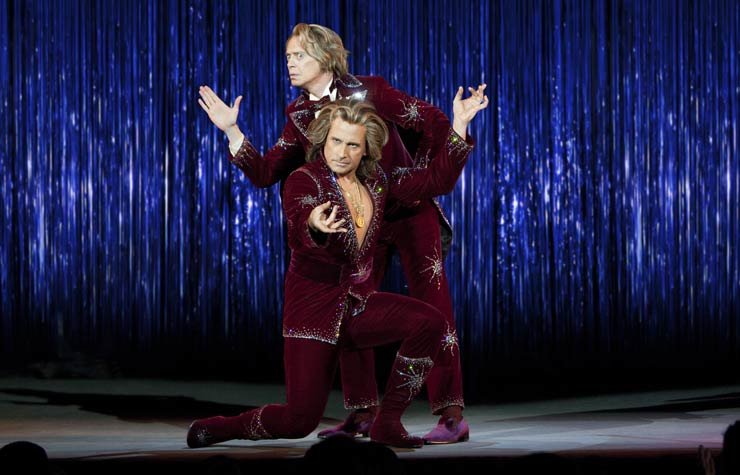 Steve Carell and Steve Buscemi in "The Incredible Burt Wonderstone."

Burt Wonderstone (Steve Carell) and Anton Marvelton (Steve Buscemi) have been pals and magic act collaborators since elementary school. When we catch up to them in full Las Vegas flower, they are the hottest act on the Strip, a spangled, blow-dried cross between David Copperfield and the duo Siegfried and Roy.

Skip ahead 10 years, though, and the act is getting tired. Burt and Anton are doing the exact same routine as always, with the same tired jokes and the same predictable production-size illusions. What's worse, Burt has become something of a jerk — snippy with his partner, and a serial womanizer, luring one groupie after another to his lavish suite, which features what he proudly declares is "the world's largest bed."

Then comes the ultimate threat: an edgy "street magician" named Steve Gray (Jim Carrey), who is redefining what illusion is all about. Stripped to the waist, tattooed with the image of a bunny skull emerging from a top hat, Gray presents an act that is more self-mutilation than magic. He produces a card from a wound in his cheek, sleeps on burning coals and refrains from urinating for a week. The public laps up his shtick. Burt and Anton find the audience in their lavish Vegas showroom dwindling.

Their attempts to out-Gray Gray fizzle disastrously, of course, and so begins the pair's journey of rediscovery, which includes an encounter with the magician, now retired, who inspired them as children, played by Alan Arkin.

The cast of The Incredible Burt Wonderstone is flawless. Carell plays Burt as a pompous fool, but we can see that his bravura is a mechanism to conceal the bullied child underneath. Buscemi, always one of the most interesting actors on screen, shines as a man of substance existing in an ethereal occupation. And Carrey, well, it's good to see the man just being flat-out funny for once; his Steve Gray struts and swaggers between his cringe-inducing stunts and coldly belittles everyone around him, yet he's clearly as needy and insecure as those he bullies. Finally, there's Arkin, essential to the story as the grounded veteran who has been through the magic-biz meat grinder, and who, in the process, has rediscovered the sense of childlike wonder that lured him onto the stage in the first place.

That's a lot of star power, and we haven't even gotten to the remarkable supporting cast, including Olivia Wilde as a magician's assistant, James Gandolfini as a huckster casino owner and Jay Mohr as a hopelessly insecure third-string magician named Rick the Implausible. An awful lot of credit has to go to director Don Scardino, at age 64 helming his first big theatrical film, for managing to get his cast to perform as an ensemble. Clearly, his years herding the talent-heavy casts of shows like 30 Rock, Law & Order and Cosby has paid off. In fact, his sure hand on The Incredible Burt Wonderstone may be the film's most impressive magic trick of all.