Based on Tracy Letts' Pulitzer Prize-winning play of the same name, the film boasts an A-list cast, gripping scenes (including a realistic mother-daughter brawl staged by Meryl Streep and Julia Roberts) and a plot twist that, unless you saw the play, comes as a genuine surprise. Best of all, while director John (The Company Men) Wells does a fine adaptation and Chris Cooper is unforgettable in his supporting role, this is a story about women — and there just aren't enough of those on multiplex screens. 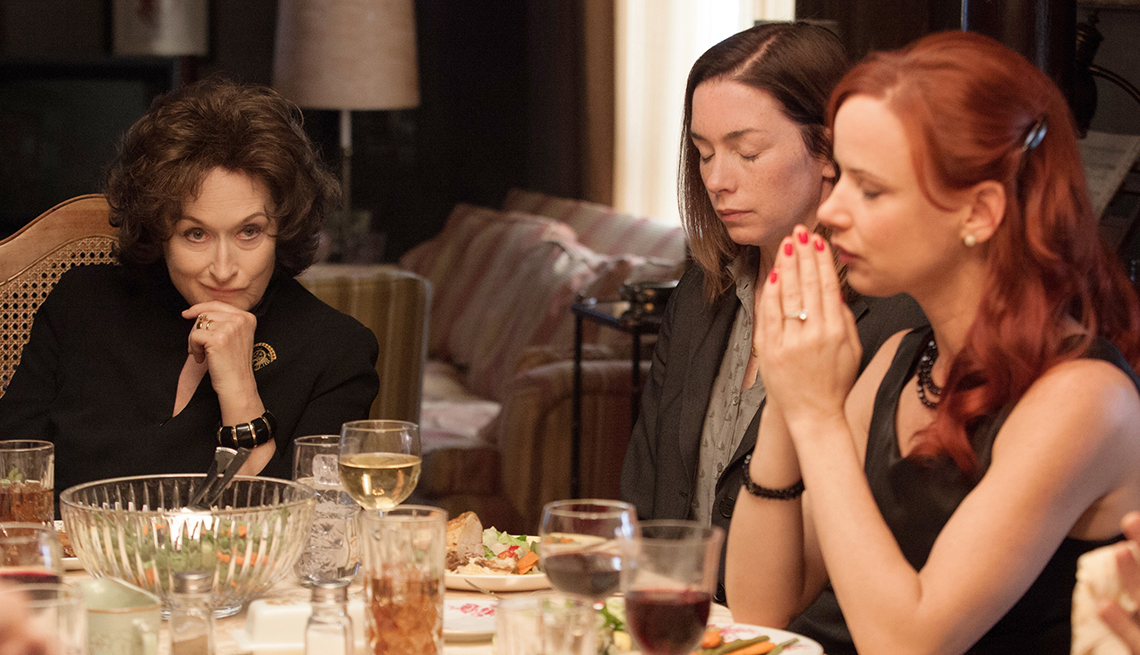 Violet (Streep), the troubled matriarch of the Weston clan, calls her three grown daughters back to the family's heartland home when her hard-drinking husband, Beverly (Sam Shepard), goes missing. As the girls trickle in, we learn this is less about Beverly than Violet, now in sorry shape — patchily bald head, burning tongue — after chemotherapy for mouth cancer. Violet stays busy popping pain pills, smoking ceaselessly and bitterly rehashing past grievances.

Eldest daughter Barbara (Roberts) tries to take charge, but she's come from Colorado with burdens of her own, including her philandering husband (Ewan McGregor of Salmon Fishing in the Yemen) and her moody adolescent daughter, Jean (played by Abigail Breslin of Little Miss Sunshine). Youngest daughter Karen (a terrific Juliette Lewis) has long kept her distance from the clan; she arrives with her latest boyfriend, Steve (Dermot Mulroney of My Best Friend's Wedding), who keeps her sufficiently distracted. And middle sibling Ivy (Julianne Nicholson of Boardwalk Empire), who lives locally and resents her sisters for leaving her to deal with their parents' dramas, soon reveals some histrionics of her own: She's romantically entangled with her simpleton cousin, Little Charles (a miscast Benedict Cumberbatch), the son of Violet's sister Mattie Fae (the fabulous Margo Martindale) and Mattie's sensible husband, Charles (Cooper).

Most of the action takes place around the dinner table, but the minutes fly by as quickly as Violet's venomous barbs. Violet's character is meant to be overwrought, but Streep's performance is over the top to a fault. She's best when she's unintentionally funny — and there are, thankfully, many funny lines in this material.

Roberts isn't bad at all, but too often she comes across as unnecessarily long-suffering. The secondary players — especially Cooper, Lewis and Martindale — allow the back stories to unfold without excess melodrama, and their acting leaves a lasting impression. So too does the moment when you witness the dysfunction through the eyes of Johnna (up-and-coming Misty Upham), a Native American caregiver whom Beverly had hired to help Violet (despite the latter's racist contempt).

August: Osage County has a stagey feel: Watching it, I flashed back to Carnage, Roman Polanski's 2011 film that was likewise based on a play and had a similar claustrophobic vibe. But Wells releases us from this toxic homestead just long enough to gulp some bracing Oklahoma air — and to savor the twisted nature of a gone-so-wrong family affair.