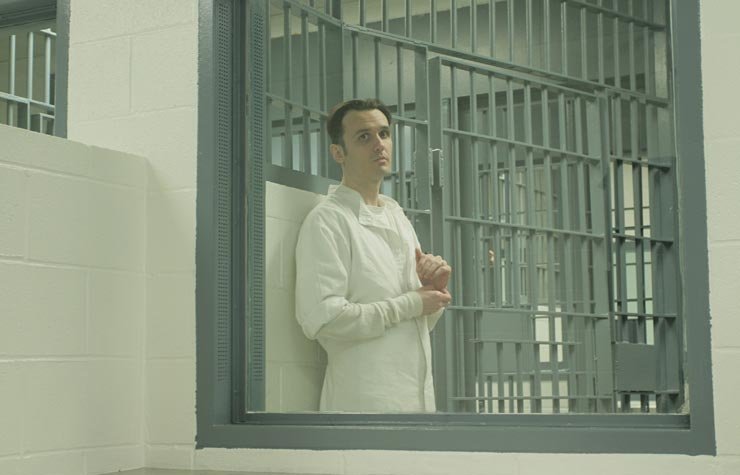 Damien Echols, photographed in prison while filming "West of Memphis."

We remember the shocking details: Three 8-year-old boys — Steven Branch, Michael Moore and Christopher Byers — were found murdered in a drainage ditch in West Memphis, Ark., in 1993. They were nude, their hands and feet bound, and one of the victims bore signs of genital mutilation. The McMartin preschool sexual abuse case in Los Angeles, which had dragged on for seven years with no convictions, had been dismissed in 1990, but national hysteria about sexual abuse of children, some of it connected with satanic rituals, still prevailed.

In that atmosphere in 1994, three West Memphis teenagers — Jason Baldwin, Damien Echols and Jessie Misskelley Jr. — were convicted of the Arkansas killings in a trial short on real evidence but long on allegations of cult participation, devil worship, hard rock music and black magic. (Echols was deemed the ringleader of the group and was sentenced to death row; the other two received life sentences.)

Since then, the case of the West Memphis Three has garnered much attention, including books and a documentary trilogy called Paradise Lost criticizing the convictions and calling for exonerations. Now from award-winning director Amy Berg comes West of Memphis, which has the advantage of taking a detailed look at the case from its start all the way through August 2011, when, in a rare legal maneuver known as the Alfred plea, Baldwin, Echols and Misskelley were released.

They had served 18 years in prison and were in their 30s. The deal, which allowed them to enter no contest pleas to the murders while simultaneously maintaining their innocence, was struck after Arkansas' attorney general, pressured to retry the case, admitted he wasn't sure he could win a conviction.

As in her previous documentary, Deliver Us From Evil, in which she methodically exposes the behavior of a child-raping priest, Berg mercilessly takes us to the crime scene (be forewarned: some of the footage is gruesome) and re-creates the aftermath, exposing our flawed system of justice that, too often, snares the poor, including the self-described "white trash" who were the West Memphis Three.

Early in his prison term, Echols was befriended by a New York landscape architect named Lorri Davis (they married in 1999), who managed to attract celebrity attention to the case from Lord of the Rings director Peter Jackson (a producer of the film), Johnny Depp, Eddie Vedder, the Dixie Chicks and others. While West of Memphis includes them and their effort to win a new trial in its narrative, the film appropriately focuses largely on the evidence, or lack thereof. An early confession by Misskelley, who reportedly has an IQ of 60, is shown to have been coerced. A forensic reexamination of the victims' bodies stunningly reveals that many of the wounds alleged as torture at trial occurred postmortem. And timelines and alibis, when reviewed closely, almost never line up.

But Berg doesn't stop there. Her film presents new DNA evidence recovered from the crime scene, interviews with obvious witnesses to whom investigators failed to talk, and deep background digging among family members of the victims to point the finger at another suspect — Steven Branch's stepfather, Terry Hobbs. Sadly, because of the political climate in Arkansas (which Berg so finely conveys) and because of the still-flawed nature of justice in America, it's unlikely we'll ever know who really killed those three young West Memphis boys.