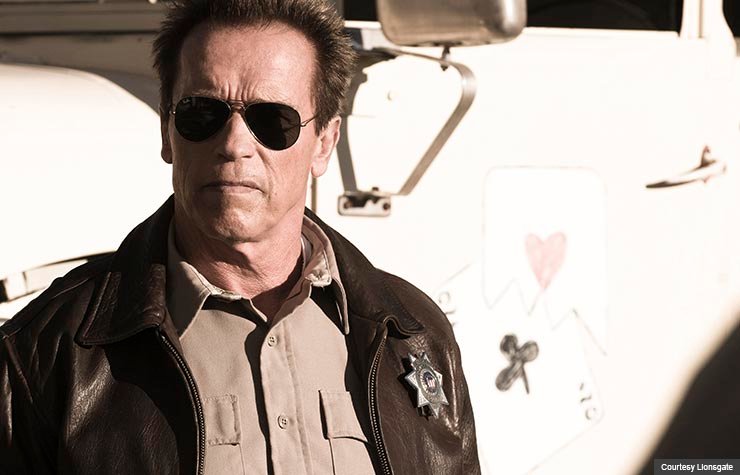 There are movies that dare you — just dare you — to pick them apart. Go ahead, they taunt, nitpick about the plot flaws that gape like bomb craters on an interstate. Quibble with the script that throws one snappy quip after another against a bloody wall, hoping that one will stick well enough for repeated use in the desperately hoped-for sequels. And by all means, take the film's rejection of simple physics to task and complain that, in the real world, sports cars cannot suddenly launch themselves into the air, nor do bodies explode like ketchup-filled piñatas when shot.

The reason you don't take that dare is simple: If you did, you'd sound like an idiot. In reviewing The Last Stand, Arnold Schwarzenegger's return to above-the-title action films after his decade-long dabble in politics, nitpicking the details is like pointing out dings on a barreling locomotive. The fact is, Arnold delivers just about everything his die-hard fans could want: He wields a huge gun, he squints like nobody since Clint Eastwood, and even at age 65 he carries an air of reassuring, almost superhuman invincibility.

Ready for the plot? A Mexican drug lord (Eduardo Noriega) escapes from federal agents (headed by a hapless Forest Whitaker) in Las Vegas. He then hops into a stolen souped-up sports car and makes for the Mexico border, 300 miles away. Why is he driving south rather than, say, oh, flying? Simple: If he flew, there'd be no movie! Along the way he rolls through roadblocks like they're duckpins, and the nation's last hope of stopping him is Arnold — er, Sheriff Ray Owens, who despite his Levittown phone book name persists in an accent that apparently has all the staying power of a Vienna sausage.

As sheriff of Somerton Junction, Ariz., a sleepy little border town, Ray seldom even has to write parking tickets. But once he realizes how high the stakes are, he enlists his entire three-deputy police force and the services of a weapons-hoarding eccentric (Johnny Knoxville in a small, amusing role) to take, as the title none-too-poetically spells out, a last stand.

I can't quite say it's as if Arnold's never been away. He's been away, all right: He's thicker, a bit stooped and looks kinda world-weary. The worry I had was that the weirdly smoothed-out, pulled-back face he wore as a politician might be distracting, but here the star is pleasingly craggy, creased and creaky in all the right places. Good for him.

So who cares if the bad guy hires a heavy-lift helicopter to build an aluminum bridge so he can drive his cool car across a canyon into Mexico, when he obviously could have just hopped on the helicopter and flown to freedom? And so what if the FBI and entire U.S. government, with all those jets and bombers and heat-seeking missiles at their disposal, are absolutely helpless when it comes to stopping a little sports car as it darts across the desert?

And how about … Wait a minute. Man, I sound like an idiot, don't I?