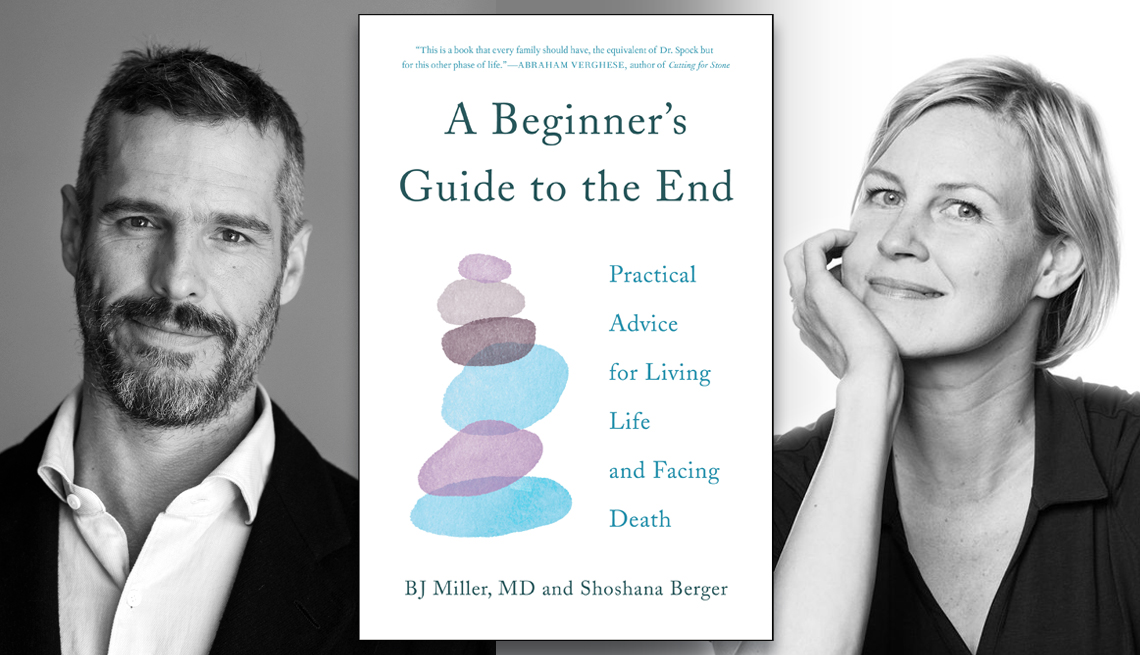 A new book designed to prepare people for death in the same way so many books prepare parents for birth hopes to reframe how death is perceived.

A Beginner's Guide to the End suggests death “can really be profound and meaningful if you feel a little bit more prepared for it, “ says coauthor Shoshana Berger.

Berger met coauthor BJ Miller, a palliative care physician, when the “wound was fresh” from the death of her father. She says Miller had a “grand vision” of how to alter the death experience.

"Death is going to come no matter what you do,” says Miller. “Try to soak that fact in. If you do, you can let it lend some urgency to your life. You can let it lend some appreciation to the time and relationships that you have.… Dying does not have to be quite so hard. In fact, it can be kind of beautiful."

The authors say one of the best gifts that a person can give to family is a conversation about end-of-life planning. They suggest discussing preferred health care choices and preferred funeral arrangements in case communication fades or a death comes unexpectedly. “All that tough stuff can be such a huge gift, and people don't really understand that.…Reframe the conversation and think of it as taking care of the people you love,” says Berger.

The book discusses the story of Ira Byock, a palliative care physician, who found a card file box on his mother's kitchen counter after she died. Inside were paperwork such as bank account numbers, transactions in progress, and her lawyer's information.

"They felt like their mother had left them a batch of freshly baked cookies on the counter. He and his sister felt like it was one last kind act as a Jewish mother leaving for her children,” says Berger.

The authors suggest leaving a “When I Die” file and putting it in a place easily discoverable by someone trusted.

It should include all accounts, logins and passwords to social media, how to access phone and computer documents, real estate deeds, and powers of attorney for finances and health care.

"The average time it takes to settle an estate is 16 months, so your family ends up with a full-time job of sleuthing through your mail and files to find all that stuff right when they are trying to figure out how to live without you,” Berger says.

"It's a dynamic conversation,” says Miller. “You don't have this conversation once with family and leave it at that. It's really something you revisit over time whenever your life changes.”

Naming a health care proxy is important even if it isn't down on paper in the form of an advance directive. It will save the family from anguish and prevent the doctor from making assumptions about what is wanted.

"It may be a spouse, it may be a friend. It needs to be a person whom you trust and can speak for you, but that sometimes isn't the person we're closest with. That may be too much to ask in a time of crisis. But stay in touch with that person, talk with that person … so they can advocate for you,” Miller says.

But behind money, paperwork and health care is the physical and emotional presence that loved ones face.

"People often leave behind, unfortunately, a bit of an emotional mess because they carry old feuds to their grave,” Berger says. “It's really in that moment where you say, ‘Is this argument or old dispute really worth carrying through? Is this really something I'm going to hold on to if I knew I was going to die tomorrow?’ Of course, most people would say no."

It's important to make sure “you're not leaving a house full of junk for people to clean up,” Berger says. “But there's also your emotional attic, figuring out how to clear that out. What do you need to say to the people in your life who you love?"

Byock talked with Berger and Miller about the four phrases people long to hear and that help mend relationships, as he wrote in his book The Four Things That Matter Most: “Please forgive me,” “I forgive you,” “Thank you” and “I love you."

"We asked him if there was anything further that didn't make it into his book,” says Berger. “He said, ‘One thing that people often don't say and it sticks with people throughout life is “I'm so proud of you."'"

Excerpt from A Beginner's Guide to the End

Your Goals of Care

ONLY A SMALL FRACTION OF US, 10 TO 20 PERCENT, WILL DIE WITHOUT warning. The rest of us will have time to get to know what's going to end our lives. As discomfiting as that can be, it does afford us time to live with this knowledge, get used to it, and respond. We do have some choice about how we orient ourselves toward the inevitable. Where we'll die, maybe. Around whom. And, most important, how to spend our time meanwhile. To make those choices manifest, you'll need to be clear about your “goals of care,” a phrase borrowed from the field of palliative care that's becoming increasingly common. By thinking through how you want the end of your life to look, you'll find a useful way to face decisions that need to be made along the way. Identifying your goal is more than simply making a list of priorities; it's a process that helps you figure out what your priorities are while traversing aging or infirmity. That means listening to yourself as well as to others and communicating with those around you about how you feel and what you think. It's a sure way to land on decisions you (and those around you) can live with.

Your goals of care will follow from your answers to questions such as: What's most important to you now? What can you live without? How much treatment do you want and what kind? Where do you want to be when you die? How do you hope to be remembered? Your wishes also need to square with the practical realities of your situation, including logistics and costs. We are not suggesting that your goals are fixed — they will change over time, as your life does. But if you can articulate them, they will become a compass.

In this book, we move chronologically through the steps toward the end of life, but you may be on a different schedule, and that's fine, too. We are not here to load you up with work. We're here to help you navigate the work that's coming. Use this material in whatever way fits for you.

The vast majority of you will bump up against the health care system at some point, and it will likely have a significant impact on how you experience life with illness and your own dying process. Our system has profound weaknesses, along with its astonishing strengths, and moving through it can be a counterintuitive and vexing experience. There are many reasons for this, but one way or another they all spring from the fact that the health care system was designed with diseases, not people, at its core.

That's another reason why the care part of health care must always return to you, the human at the center: You need to stake that claim and protect it.