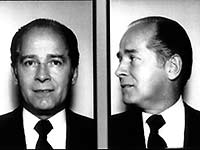 James "Whitey" Bulger was on the FBI's most-wanted list until his arrest in 2011.

The notorious gangster James "Whitey" Bulger was the most wanted fugitive of his generation before his capture in June 2011. In their probing new biography, Whitey Bulger: America’s Most Wanted Gangster and the Manhunt that Brought Him to Justice, award-winning reporters Kevin Cullen and Shelley Murphy follow Bulger's extraordinary criminal career from childhood to capture. They tell a gripping story of teenage thuggery and murder and the building of an underworld empire.

See also: An insider's look at the FBI

Having exclusive access to previously undisclosed documents, Cullen and Murphy explore the truth of the Whitey Bulger story. They reveal for the first time the extent of his two parallel family lives with different women, as well as his lifelong paranoia, stemming in part from his experience with the CIA, and show a keen understanding of his mind-set while on the lam and behind bars. The result is the first full portrait of this legendary criminal figure.