See also: The author on starting over — again — after age 50.

Still, I am too old to keep on saying certain things. Being part of the generation that won't grow up means that I still have many friends (female) who announce that they're going "to the little girls' room" to "tinkle," and many friends (male) who clap their pals on the back and cry "dude!"

We may be young at heart. We may even fit into our wrestling singlet or cheerleader uniform. (No, you don't have to prove it … I believe you!) All that said, we could at least talk the talk of gracefully grown people.

What follows here is a smattering of silly syntax — slang that people of my generation should never utter.

Panties. Did I ever actually say "panties"? Nobody should say panties, even toddlers. Did this infantile, diminishing, eroto-weird noun come out of my mouth? Why is it still used in catalogs ... or outside brothels? Or inside brothels? Let's say underwear, smalls or simply point.

Cool. I was young when I first became a parent, and when my first child was a high school senior, I had license to use this word. It was, however, a probationary license. Now, the silence that falls on the room when I say "cool" means that it's not.

Smashed, over-served, hammered. If you're embarrassed that you did it, you should be doubly embarrassed to confess it. The boasts of youth are the secrets of age. Or should be.

Freakin'. When little kids say it, their mouths cry out for soap. When we do, it cries out for restraint. Or restraints.

LOL. It makes me want to ROFB (see key). 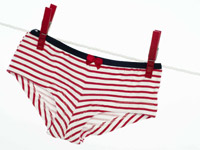 Panties." A word 50 plus should avoid using.

I'm like … It's not our fault that we use this all-purpose way to explain any reaction. Our kids have defenestrated our brains and replaced real language with this easy-to-install catchphrase. Of course, we mean, "I said" or "I say" or "I looked this way." So that vulgar but somehow cute Top 40 tune should actually go, "I see you driving round town with the girl I love, and I say, 'Forget you.' "

Don't say that, either.

Chill out. If you are forced at knife point to use this phrase for relaxing, at least don't say that you are "chilling." Or worse, chillin', or anything with a dropped "g." If you get all worked up and have to start chillin', please, just don't ever, ever chill-lax.

Next: More slang we should drop. >>

As if. Along with "Dream on" and "I'm so sure," this is another bit of bytes-generation banter, shorthand for a dismissal in the most certain terms. When we say it, we sound as if we believe we are 20.

Whatever. If, when you hear it, this single word makes you want to hurt yourself and the speaker, how do you think people feel when you say it?

Hot or any derivation thereof — unless it refers to the air temperature on the 10th tee or the tingle of the habaneros.

Totes or any derivation thereof — unless you mean that clever little travel umbrella, not the text-form of "totally" … and as for "totally," well, that goes without saying.

Sick! or any derivation thereof — unless handed a pencil-shavings-flavored jellybean. Today, of course, as now used, this is meant to connote something wonderful, as in "He is so hot and his car is totally sick!"

The next few beggar even codification.

It's a Snooki thang.

There. We can do this together. I'm just sayin'.

Or, are you worried? It seems that only last week we were working on a groovy thing and now we're on the verge of exclaiming, "My word!"

Nah. We're way too you-know-what for that, and the coolest speak loudest when they whisper.

Jacquelyn Mitchard is a best-selling author of more than 20 novels, including The Deep End of the Ocean, the first selection of the Oprah Book Club. Her next novel appears in September.

You may also like: 13 little luxuries we deserve after 50.