Every now and then you read a book that richly echoes your own experience. The book that did that for me in 2010 was Isabel Wilkerson's The Warmth of Other Suns: The Epic Story of America’s Great Migration, which recounts how more than 5.5 million black Americans abandoned the South in the half-century between World War I and 1970, radically transforming the black American population from primarily rural to primarily urban.

I was born in Washington, D.C. in 1943, then spent my middle and high school years in Springfield, Mass. So while much of this story unfolded before my time, as an African American who grew up in New England I am a child of the mass movement Wilkerson retraces here.

Books for Grownups
AARP The Magazine and the Editors of Publishers Weekly have teamed up to let you know about the latest fiction, nonfiction and how-to books of interest to you. Read

My mother, also born in D.C., was the daughter of Mississippi migrants; her father, Swan, had made his way to the nation's capital in 1909, and he sent for his wife, Ruby, within a few years. As for my father, he had been packed off to D.C. from Durham, N.C., by his mother around 1930, joining an older brother who already lived there. In Washington, she expected, he would be able to shape a life better than anything possible in Durham. My mother and father met in 1940 in Baltimore, where she was teaching school; by then, they had both graduated from historically black Howard University (and my father had gone on to divinity studies there).

My parents' stories are emblematic of the millions who would flee the South later in the 20th century. So too are the biographies of the three black migrants that Wilkerson has chosen to focus on in The Warmth of Other Suns. Through them, her vivid, compelling prose and insights advance our understanding of the outsize social impact of this exodus — not just on black life in particular, but on American life in general. By taking us into the gritty lives these three lived in the South, Wilkerson makes us feel the raw, restrictive racism that they and other black migrants traveled north and west to escape:

Upon moving to "the promised land," however, all three (and, by extension, millions like them) found it delivered far less than it had promised from afar. Walking into a bar near New York City's Penn Station, for example, Starling and a friend were served the drinks they ordered. But no sooner had they finished and paid their tab than the bartender picked up their glasses and smashed them under the counter. There were no "colored" or "white" signs in the city, notes Starling, yet he found it "tricky" making his way through a place that "looked free" but was not always so for blacks.

Starling would ply even more treacherous waters on his travels throughout the Deep South as a Pullman porter. As a member of a loose network of activists, he covertly helped spread ideas and news of "freedom" by smuggling black newspapers such as the Chicago Defender into a southland that violently resisted the propagation of such radical notions. 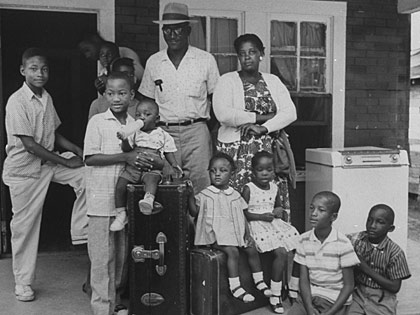 The Danham family was given free train tickets during a project by the White Citizens Council of New Orleans to send African Americans north.

Harrowing accounts like these pepper the book, underscoring the migrants' strength and determination to survive — and thrive — under "the warmth of other suns" (the phrase comes from novelist Richard Wright). Before setting foot on the streets of Chicago, Gladney had never even thought about voting. Indeed, no black person she had known back in Mississippi would have dared to talk openly about such a right. But in the Windy City she was free to vote for the first time — and did so in the 1940 presidential election, casting her ballot for Franklin D. Roosevelt. That positive civic experience proved redemptive, motivating Gladney to go several steps further and volunteer as a poll worker.

And what of Foster? Gregarious and open, he made his way to California, embraced the flashy glamour of Los Angeles and became the personal physician for Ray Charles. Foster also built a thriving medical practice serving L.A.'s burgeoning community of black working people.

The winds of change that blew these 5.5 million migrants up and out of the American South turned out to be a gentle buffeting compared with the gale-force struggles ahead: "These are the stories of the forgotten, aggrieved, wishful generation between the Harlem Renaissance and the civil rights movement," writes Wilkerson, "whose private ambition for something better made a way for those who followed."

The Warmth of Other Suns reveals some thought-provoking particulars about these wayfarers. Though migrants of the 1940s had about two years' less education than the blacks they encountered in the North, all that changed in the 1950s: In many of the cities where black migrants settled — including New York, Cleveland, Philadelphia and St. Louis — their high school graduation rates exceeded those of the established white residents.

Not only that, notes Wilkerson, but migrants were "more likely to be married and remain married, less likely to bear children out of wedlock, and less likely to head single-parent households than the black northerners they encountered at their destinations."

If a sadness overshadows the later years of the three pilgrims we follow throughout the book, Wilkerson draws no larger lessons from their fates, and I’m glad she hasn’t tried: That story — of inner-city black America — would require another book. Starling died Sept. 3, 1998. He had been living in the Harlem brownstone he owned, ruing the toll he believed his lengthy absences as a porter had taken on his children's lives. Gladney was still alive when the book was published in September, trapped in a crime-ridden Chicago neighborhood but managing to live there with dignity and respect. And Foster spent his last years on the staff of a Veterans Affairs hospital, a flashy bon vivant "exiled," he felt, to an office near some dirty bathrooms. Undergoing dialysis and beset with cancer and heart ailments, Foster died Aug. 6, 1997.

True to the book's subtitle, America's great migration makes an epic tale indeed — not just for its size and scale, but also because Wilkerson has accomplished a storytelling feat in the classical tradition of The Odyssey, Beowulf and the tales of Sundiata and Mansa Musa.

I am not a fan of confining black history to a single, officially celebrated month. But as February happens to be that month, I can think of no better access point than The Warmth of Other Suns.

Charles E. Cobb Jr. is a journalist and author. His latest book — On the Road to Freedom: A Guided Tour of the Civil Rights Trail — was published by Algonquin Books in 2008.