En español | Chita Rivera. She's a world-class triple threat — a singer, dancer and actress — whose Broadway and silver screen characters have become cultural icons. Who can forget Anita singing "I like to be in A-mé-ri-ca" in West Side Story? Or Nickie belting out "Hey, big spender!" in the film Sweet Charity? Or the glamorous inmate prowling Murderess' Row in the movie version of Chicago? 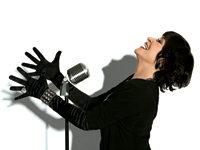 "She's the personification of life in motion."
—Graciela Daniele, choreographer

See also: A star in the kitchen.

Rivera's been a hit in New York and London, Rio and Rotterdam, Tokyo and Toronto, and myriad points in between. Now 78, she recently returned from an Australian tour of Chita Rivera: My Broadway, a concert of her top songs. "Why not travel, why not see the rest of the world, why not experience life?" she asks. "It's beautiful! Phenomenal!" She lets loose her trademark husky laugh.

"Chita loves to be moving and traveling, laughing, dancing and singing," says choreographer Graciela Daniele, a close friend who directed Rivera's 2005 Chita Rivera: The Dancer's Life. "She's the personification of life in motion."

Propelled by that motion, she's been recognized at the highest levels. In 2002 Rivera became the first Latina to receive a Kennedy Center Honor. Seven years later, she was at the White House receiving a Presidential Medal of Freedom — along with Justice Sandra Day O'Connor, Senator Edward Kennedy and Archbishop Desmond Tutu — from President Barack Obama. "I thought, 'How could I possibly be sitting with all these people I'm humbled by?'" she recalls. "It was extraordinary."

Next: Rivera's family and insights from her daughter, Lisa Mordente. >>

Being on stage is happiness for her," says Rivera's daughter, Lisa Mordente. "At the same time, she loves being in the kitchen."

Earlier this year she and her Maltese, Casper, moved six minutes away to a house with less property and an apartment where Lisa and her dog, Stimpy, live.

Lisa's dad, Tony Mordente, and Rivera married in 1957 while they were both in West Side Story; he played A-Rab. Mordente went on to become an accomplished director and choreographer. They split when Lisa was 6, and she spent most of her time with her mother.

"All the kids thought my mom was the cool mom," Lisa says. "She would choreograph our little shows at junior high. One year we did The Pajama Game and some of the original cast came, including Eddie Foy Jr. She was so much fun. She always made me and my girlfriends laugh."

But Rivera separated her roles as mother and star. "During the day, we'd have a regular day," Lisa recalls. "If we were on tour, I'd have a tutor. We'd have dinner at 5 o'clock — at the table, with placemats, no TV. Then at 7:30 it was 'half hour,' meaning we had to be at the theater because the curtain went up at 8. She didn't mix the two worlds, which I'm thankful for. It's a crazy business."

Show business is made for Rivera, who changed her given name, Dolores Conchita Figueroa del Rivero, to fit on marquees. Today she's ambivalent about the change. "When I get my nails done and these lovely Asian ladies say their name is Janet or Betty, I get up on my big box and say, 'That's not your real name! You must use your real name!'" Then again, she says, "Chita Rivero doesn't sound as good as Chita Rivera."

Her brother, Julio del Rivero, says, "Chita always had that special quality of attracting attention. She didn't know it, but the solo spotlight was always on her, even when she appeared in the doorway."

Her Puerto Rican father, Pedro, was a sax player who died of cancer when Chita was 7. "He was an elegant man," she says. Her mother, Katherine Anderson del Rivero, was Irish. "Our house was always a joyous house, even after Daddy died."

When Julio set up a theater in the basement to show 16mm movies to the neighborhood kids, Chita used the platform to ad lib dance routines, often upending props and curtains. "She destroyed my little theater," Julio jokes. "So Mother sent her to ballet school in New York."

Next: Her talents and performances. >>

In reality, Rivera had already been taking dance classes with her sisters and was awarded a scholarship to George Balanchine's prestigious School of American Ballet in Manhattan at 14. "I don't know if Daddy would have let me go," she says. "He was very Latin and the family was very tight." She calls the three years at SAB the foundation for all the dancing she's done since.

An audition for master choreographer Jerome Robbins landed her a role as a principal dancer in the 1952 tour of Call Me Madam, starring Ethel Merman. Rivera was off and running — and kicking, jumping and back-flipping.

She became a bona fide star as Anita, an explosion of song, dance and emotion, in 1957's West Side Story. In a career of 50 years and counting, her costars have ranged from Antonio Banderas (Nine) and dear friend, the late Gwen Verdon (Chicago), to Liza Minnelli, who says Rivera was her inspiration for getting into theater. Rivera won a Tony Award for her spin opposite Minnelli in The Rink.

After a 1986 car accident left her with 16 screws in her crushed right leg, she created a cabaret act with less footwork. Seven years later she won a Tony for her role as seductive Aurora in Kiss of the Spider Woman.

"Chita's a star," says award-winning composer John Kander who, with partner Fred Ebb, wrote the music for Chicago and The Rink, among others. "But she came from that world where you take lots of classes and you work very hard to hone your talent. She sets the behavior and the work standard really high on a show."

Rivera's dedication to work belies an awareness of those less fortunate. She's active on the Broadway Cares/Equity Fights AIDS board. "She's helped so many people," says friend and choreographer Dee Dee Wood. When a dancer they knew was ill stopped answering his phone, "Chita went to his house, took him to the hospital and helped him get well," she says. "If Chita's a friend, she's a friend."

Her footwork may not be as fancy as it once was, but Rivera maintains the soaring optimism and spirit befitting a legend: "You really never know what the next day brings you. I have a very young outlook. I don't think you know how much you can do until you try."

You may also like: Chita Rivera's homemade corn pudding recipe.