When it comes to Fenway Park, Bill Hogan – my grandfather – has seen it all. Almost literally.

He was born on April 14, 1912, in Cambridge, Mass. Four days later, just a few miles away across the Charles River, the Red Sox played their first game at their shiny new ballpark, christening Fenway by defeating the New York Highlanders 7-6 in extra innings.

A century later, both my grandfather and the old park are still going strong.

See also: So you think you know baseball? 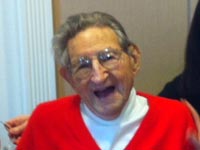 Bill Hogan of Lexington, MA will turn 100 on April 14 and will throw the first pitch at Fenway to celebrate the park's 100th year celebration.

The Red Sox will begin their 100th season at Fenway on April 13 with a home opener against the Tampa Bay Rays. The next day, Grampy Hogan, on the exact date of his 100th birthday, will toe the mound at Fenway under the twilight sun and toss the ceremonial first pitch before the second game of the series.

“It’s very nice to still be here,” he tells me with a laugh and a classic Boston accent that has never wavered over a full century of living. “And to have some intelligence left.”

That is the understatement of, well, the century. He may be the smartest person I know — and even at 100, he’s certainly got the best memory.

Ask him about his childhood and he’ll reel off the names of the kids he walked to grammar school with, or the Cambridge fireman who would open a hydrant on cold winter days to flood the local playground and turn it into a pickup hockey rink. He remembers the exact route he’d take — a walk, a streetcar, another walk — to get to his high school, Cambridge Latin. He remembers the day he met Agnes McHugh, my grandmother.  And he remembers the name of the mutual friend she was visiting when he first laid eyes on her, and where they went on their first date.

He remembers his friends on the council who helped him push through policies, and, yes, his nemeses (advice: don’t mention Mickey “The Dude,” unless you really want to rile him up).

And the Red Sox. Oh, does he remember the Red Sox. Does he love them? Yes, he loves them. Completely. But like any serious relationship, it’s sometimes complicated. The team won four World Series titles before his 7th birthday, and then waited 86 seasons to win the next one. Even for a 100-year-old, that’s a long time.

But the wait was worth it.

He still watches every game, and offers a running commentary. He knows about the prospects working their way up through the minors. He knows the stars of this year’s team, Lester and Beckett and Big Papi and Gonzo (“a great hitter,” he says of Gonzalez). Not that he’s overly impressed, of course.

“I’ve met Williams, and Joe Cronin,” he says with a wave of his hand.

Of course the pitch will be an amazing experience, he says. He’s been training for a year. But when it’s over, it’s back to life. He has an apartment and great friends at a wonderful assisted living center called Brookhaven in Lexington. His social calendar is busier than mine, and probably yours — there are poker games, bridge nights, lunches and dinners with pals. Last week, he did a five-minute standup routine at a comedy improv night. He says he killed.

“It’s important to have things to look forward to. Everyday I have something,” he says. “I don’t look to the past, though I enjoy thinking about it.”

Lexington is about 12 miles from Fenway, but still his life is as woven through the city of Boston as Beacon Street. Schools, jobs, family, friendships — they all happened here.

So on April 14, Bill Hogan, 100, will step onto the baseball diamond at Fenway Park.

Bill Hogan, Austin O'Connor's grandfather, will be throwing out the first pitch at Fenway park on his 100th birthday on April 14.

His four children, including my mom, will be at the game. I’ll be there cheering as well, one of 13 grandchildren watching from the stands. My wife will be there too, and our three kids will join the band of 18 great-grandkids, ranging in age from 15 to 2 months, rooting him on. He’ll throw his pitch, and, I bet, smile and wave. And then he’ll look forward to the next day, leaving yet another incredible memory for all of us.