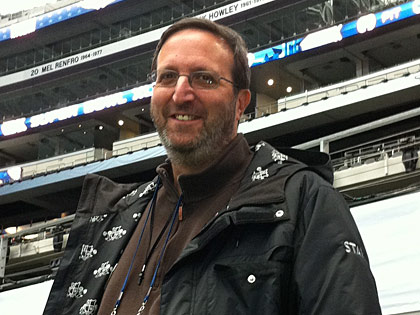 Super Bowl XLV is still days away and Ricky Kirshner has already camped out in a parking lot at Cowboys Stadium in Arlington, Texas. But he's not there to tailgate or talk football. In fact, Kirshner, a 50-year-old New Yorker and the son of legendary rock producer Don Kirshner, couldn't care less whether the Green Bay Packers or Pittsburgh Steelers take home the Lombardi Trophy on Sunday. He probably won't even watch the end of the game.

As the producer of the Super Bowl halftime show, Kirshner is focused on what happens once the referee blows his whistle to end the second quarter. That's when Kirshner takes over. For the past two weeks, he and his staff have been installing lights and technical gear inside the stadium. Most nights are spent rehearsing the show, headlined by the hip-pop group the Black Eyed Peas, on the field at a Dallas-area high school.

This is Kirshner's fifth Super Bowl, an event that is the most-watched TV broadcast of the year, with an estimated 150 million viewers. He tells us what to expect from Sunday's big show.

A MOVING STAGE SHOW "For the first time since I've been doing the Super Bowl, I feel like we have a halftime 'show.' The last three or four years, the acts have gone out and performed. But it's been more of a concert. What we're doing this year is really a field show.

"People always ask us, 'How do you get the act's stage built in seven minutes?' So this year we decided to start the halftime show with very little on the field and set up the stage as we go. This way people can see how we do it.

"The stage movement is choreographed to the Black Eyed Peas set, along with a field cast of about 800 people. Texas is known for drill teams and dance teams, so we'll have a choreographed show while the stage is built and great music by the Peas."

PURPLE RAIN SHOWERS "Working on the Super Bowl is such a massive undertaking you need to be with people you trust, and that you know can get the job done.

"A famous inside story is that up until 2007, when Prince played, it had never rained during the Super Bowl halftime show. That's what the NFL kept telling us, anyway. And, of course, for my first one it was pouring rain.

"Before the show started, we got on the headset to check to see if everyone was ready. Everyone was ready, except lighting. They kept saying, 'Wait, wait, wait.' I remember thinking, what are you guys doing?

"Finally, we got the OK. After the show, they told me one of the electricians actually held a severed cable together in the rain for 12 minutes as Prince performed.

"It was a data cable, which tells the lights what to do. Still, when you're doing a show like this, there are a lot of things going on that are beyond your control. You learn that you need to have the best people in the business with you to make sure that, if something does go wrong, they're going to react in the right way."

WHO PICKS THE ACT? "The NFL. Ultimately, it's their call. We're consulted in terms of 'Do you think you can make a show out of this?' And certainly with the Peas the answer was yes.

"There are some sci-fi aspects to their act, some old-school hip-hop. You can go any way. We're trying to make each scene of the show match the music. There are probably eight different scenes during the Peas' performance where there's a music change, a scenic change or costume change. This show is the most discussion we've had about wardrobe in all the years I've been doing it. We have a full wardrobe department, probably 10 to 12 people, whereas with Bruce Springsteen we had none."

GAME DAY "This year, our compound in the parking lot is halfway around Cowboys Stadium, so after the fans arrive we begin pushing carts with pieces of the stage down the street and around the corner. There's a whole operation going on before we ever get inside the stadium."

DOES IT MATTER WHO'S PLAYING? "Well, the Steelers beat the Jets in the AFC Championship and it matters in that being from New York less friends ask me for tickets [he laughs], which is good because I can't get it for them anyway."