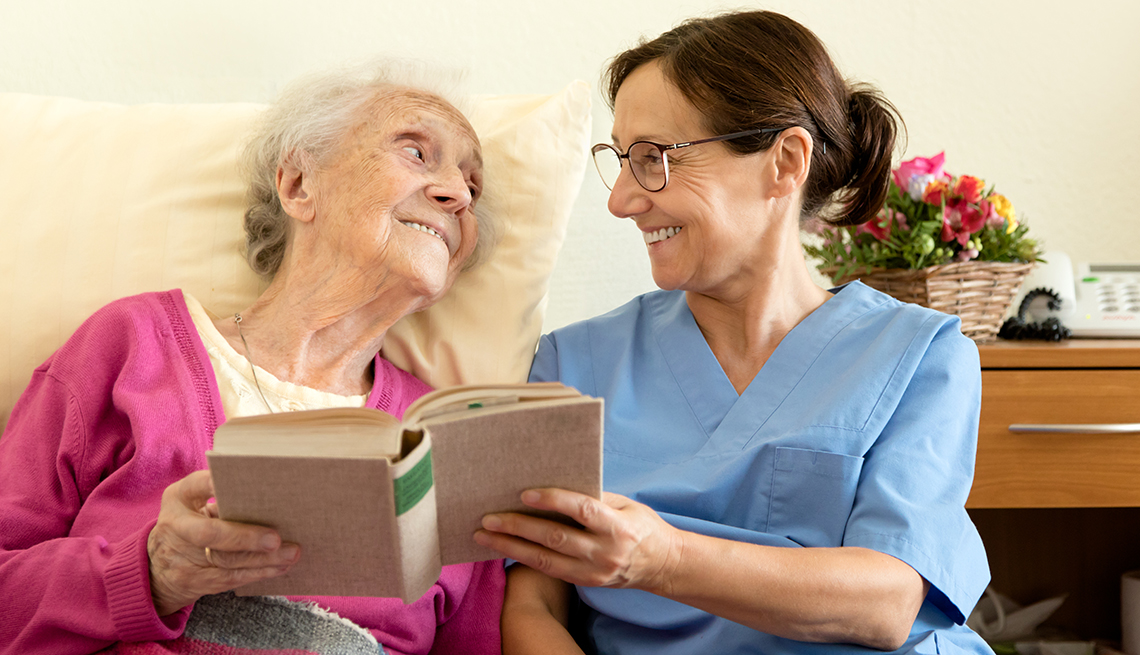 En español | Doctors dedicate their careers to taking care of strangers. But what happens when they have to step into a caregiving role for their own parents?

AARP reached out to four doctors and asked. Although the physicians had widely varying experiences, they all agreed on one thing: caregiving is hard.

“In my line of work, I thought I knew all the tips and tricks and questions to ask,” says Teah Bayless, D.O., a family medicine and geriatrics specialist with Duke Family Medicine in Durham, N.C. “But it’s different when it’s your own family member and you’re in the throes of it. It was a lot harder than I expected.”

Here, physicians share what they learned after seeing a mother or father through a serious illness or surgery — and how the experience changed their approach to medicine.

“It was very difficult to coordinate care long distance.”

Mikkael Sekeres, M.D., a hematologist and oncologist at the Cleveland Clinic, was thrown into a caregiving role when his mother was diagnosed with lung cancer last year. He recalls that when his mom first told him about the abnormal spot on her chest x-ray, he offered to help schedule a biopsy to find out if it was cancer — and then was shocked at how long getting one took. “Even though I was a doctor who had access to back lines, it still took a good two weeks,” he says.  “It was very difficult to coordinate care long distance.” That’s part of the reason Sekeres brought his mom to the Cleveland Clinic for treatment after the spot was identified as cancer. After a colleague performed the surgery, Sekeres’ mother stayed with him while she recovered. That month was tough for both of them, he says, partly because it changed the dynamic of their relationship. “My mom is a professional with a lot of leadership experience, and she is used to calling the shots,” he says. “The loss of control was hard.” The good news is that his mom, now 75, is in full recovery, and is even back to work as a full-time administrator of a housing complex.

For a serious diagnosis, seek a second opinion. Sekeres says his mom’s initial diagnosis was Stage 3 lung cancer that had spread to the lymph nodes, which would require surgery, chemotherapy and radiation. But after a second doctor ordered an additional scan, it showed the cancer actually hadn’t spread; meaning chemo and radiation weren't necessary after all. When you have a serious diagnosis like cancer, always get a second opinion, preferably from a specialist, Sekeres says.  A different doctor may have a different interpretation of something like a PET scan or you may simply be reassured because he or she agrees with your first physician.

Ask doctors to be specific in their recovery advice. Sekeres felt like he was always nagging his mom to get up and walk around after the surgery, since her doctor had recommended it as part of her recovery plan. Next time, he says he will ask for more specifics: “How often does she need to be walking?” Doing so takes the burden off the caregiver, he notes, since you can blame the doctor by saying something like, “Mom, the doctor said you need to get up and walk for 10 minutes, three times a day.” From there, you can plan together how to fit that in.

What changed in his own practice: Sekeres works harder now to reduce delays for patients and initiate treatment quickly, because he knows how difficult a wait can be. He recalls that his family was vacationing in Florida while waiting for the biopsy results. “We spent a lot of time by the pool talking about ‘What if’ cancer scenarios, and I could see how much my mom was struggling with the idea of having cancer,” he says. “It was the first time I really got to see things from the patient side.”

“I felt guilty doing the things that I enjoyed.”

Petrina Craine, M.D., an emergency physician in Oakland, Calif., stepped in as a caregiver after her mom was diagnosed with cancer a few years ago. What surprised her right off? How tough it was to navigate the medical system from the other side. Although doctors were good about sharing the plan for a given day — “you’re having XYZ test today” — Craine often had to push them to explain how something fit into the overall treatment plan. “I was always asking for more specifics: ‘What information will that give you? How will that help her? And what’s the next step after that?’” Understanding the big-picture strategy for treatment can help you and your loved one feel more in control, Craine says. Her mother is now in remission and doing very well.

Speak up for your loved one. Craine was surprised that her mother, who is not a shy person, seemed reluctant to ask questions or be assertive as a patient. “A lot of patients still have this idea that the doctor knows best,” she says. Craine quickly recognized she needed to be the one making sure her mom got her questions answered and insisting on good care. “The caregiver can be the one to say, ‘We’ve been here for four hours. When are we going to see someone?” Craine says.

Let go of the guilt. While she loves to dance, Craine felt guilty every time she took a class while her mother was sick: “I felt bad that I was enjoying myself when she was suffering,” she recalls. However, if she went too long without taking time for herself, the stress would build up and she would start to get frustrated and annoyed over little things. “Eventually I realized that I would be a better caregiver if I took some time for myself, to do the things I enjoy,” Craine says.

What changed in her own practice: Craine says she understands better the importance of connecting with patients and their caregivers on an emotional level. “I realize that people don’t just need facts and treatment. They need empathy and reassurance. Sometimes, that’s better than any medicine I can give them.”

“Things fall through the cracks.”

Gerard Mullin, M.D., a gastroenterologist at John Hopkins Hospital in Baltimore, served as the primary caregiver at different times for both of his parents before they passed away within a couple of years of each other. His father had a complication after surgery for a minor procedure and died nine months later. His mother never fully recovered after a complication from heart surgery, and Mullin cared for her for five years. As a caregiver, Mullin says he was surprised at the miscommunication and confusion he saw among providers and hospital staff. “There were all kinds of mistakes,” he says. “Nurses missed things. Residents didn’t have all the information.” What's more, he found his parents’ health care providers so cavalier when he voiced concerns that supervisors often had to be called. Meantime, Mullin’s own health suffered. “Caregivers do not realize what is happening to them physically, mentally or emotionally,” he says. “I think caregiver burnout is a silent killer.”

Do not leave your loved one alone in the hospital. Patients, especially older ones, often do not absorb what doctors say, and it’s easy for things to get lost in the shuffle. If possible, stay with them in the hospital (or assign shifts, if you have backup), especially during the day when doctors make their rounds. “You want to be there to ask questions and provide information,” Mullin says.

Ask tough questions. Research your loved one’s illness, take notes on what providers say and listen to your instincts. Even if you don’t have a medical background, your knowledge and observations are valuable, Mullin says. “If they are getting facts wrong or something seems off, ask to talk to the attending doctor,” he says. “Things fall through the cracks, and one bad error can have a domino effect.”

What changed in his own practice: As a result of his experiences caring for his parents, Mullin makes even more certain that family caregivers fully understand the plan of care, outcomes of tests and the treatments required. “I know now that it’s a team effort, and the family and caregivers are critical members of the team,” he says. “We are treating not only the person’s biological condition, but the person as a whole — and that means engaging their support team.”

“I did not attend to my own needs.”

Teah Bayless, D.O., a geriatrics specialist with Duke Family Medicine, experienced caregiving for the first time last year after her father had a knee replacement. He traveled to Durham, N.C., for the procedure and recovery because Bayless lives and practices there.  Bayless, who works full time and had 6-year-old triplets at the time, found herself consumed with caregiving. “My focus was literally on someone else — my patients, my husband, my children or my dad —all of the time,” she says. “I did not attend to my own needs at all: I didn’t sleep well, eat well or exercise.” Bayless was also caught off guard by the emotional drain of caregiving: “Seeing my normally active, independent father incapacitated and in pain was hard.”

Talk about expectations. In hindsight, Bayless wishes she had talked to her father about how much help and attention he expected. “I felt like I needed to be with my dad in rehab every day, and to meet his every need while he was here,” she says. “Had I talked to him in advance, he probably would have been perfectly ok if I didn’t visit as often. We could have made a plan that would have made it easier for me to set aside time to take care of my own needs.”

Seek out help. Bayless felt run down after only three weeks of caregiving. Over a longer period, she knows her own health would have suffered. “In many cases, it’s worth the sacrifice to pay a professional caregiver to relieve you sometimes,” she says. You can also tap community resources such as adult day programs, nonprofits and social service agencies.

What changed in her own practice:  “I have more empathy for caregivers and I work harder now to ensure they feel supported and have the resources and tools to do their job.”