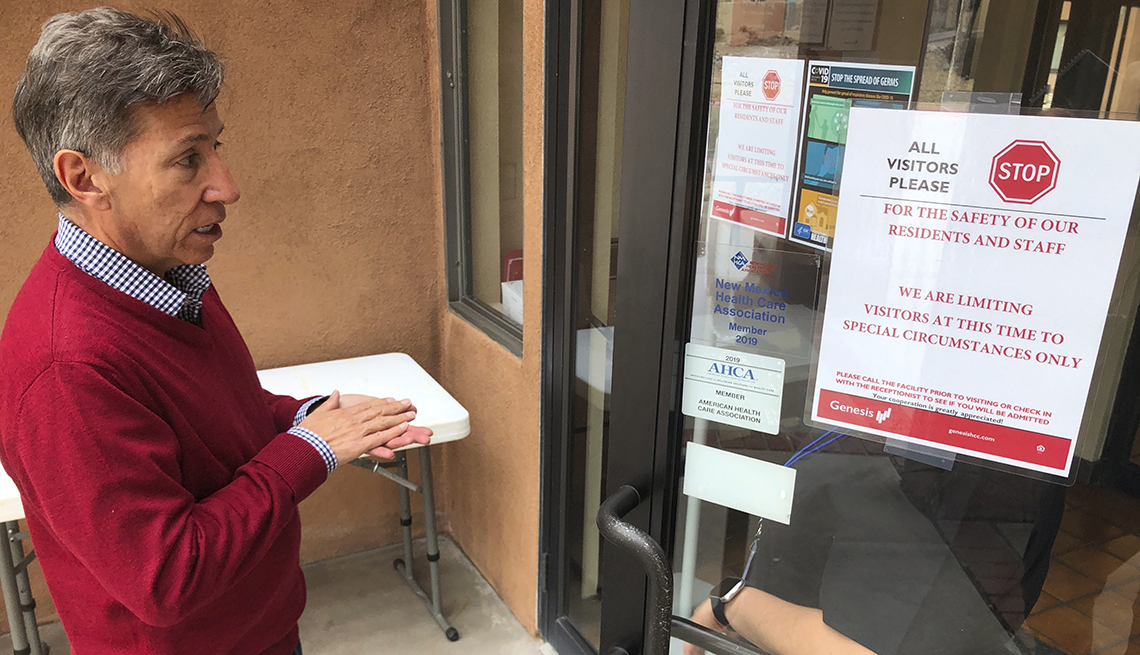 Floyd Morelos of Santa Fe, New Mexico, is turned away March 12, 2020, at the entrance to a nursing home and rehabilitation center where he sought to visit his 85-year-old mother.

En español | Nursing homes are entering the third week of sequestering their residents to protect them from the fast-spreading coronavirus, and family members physically cut off from their loved ones are increasingly worried about their care and mental health.

Since the first nursing home case in Kirkland, Washington, at least 150 skilled nursing facilities in more than half the states have at least one resident with COVID-19, according to data that the Centers for Medicare & Medicaid Services (CMS) released March 23 and has not updated.

Two leading industry groups and the federal government said in early March that family and friends of residents of any type of senior living community should stay away because some people can have a COVID-19 infection without symptoms. Others may be contagious days before showing symptoms.

"We know that there is a risk that people who appear healthy will enter nursing homes and assisted living communities and still infect residents,” said Mark Parkinson, president and chief executive at the American Health Care Association and National Center for Assisted Living

Amy Johnson of Windom, Minnesota, was able to visit her husband, who has frontotemporal dementia, on March 11 but didn’t make her usual weekend trip a few days later and, like others whose friends and relatives are in lockdown, doesn’t know when she’ll be able to return.

“The timing is hard because I want to be there more frequently because of the decline of the disease,” she says, adding that her husband recently became incontinent. “It’s really scary to have this out there when you have someone who doesn’t know how to be sanitary.”

Other caregivers worry because it has been more about three weeks since they have been allowed to assist staff with the daily care of their loved ones. Wives feed husbands, husbands make sure that their spouses do their physical therapy, and social isolation and depression can be big worries.

"He won't let anybody clip his fingernails or shave him besides me,” Johnson says.

Both the health care and assisted living trade groups, based in Washington, D.C., had urged family and friends to stay away from senior living communities before the federal government restricted nursing home visits starting March 13 after President Donald Trump declared a national emergency amid the global pandemic.

The Department of Veterans Affairs began the isolation strategy March 10 by suspending most new admissions and barring outsiders from all of its 134 nursing homes and 24 spinal cord injury centers. The exception to the no-visitors rule: when a patient is expected to die soon, a guideline now in place at all nursing homes nationwide. 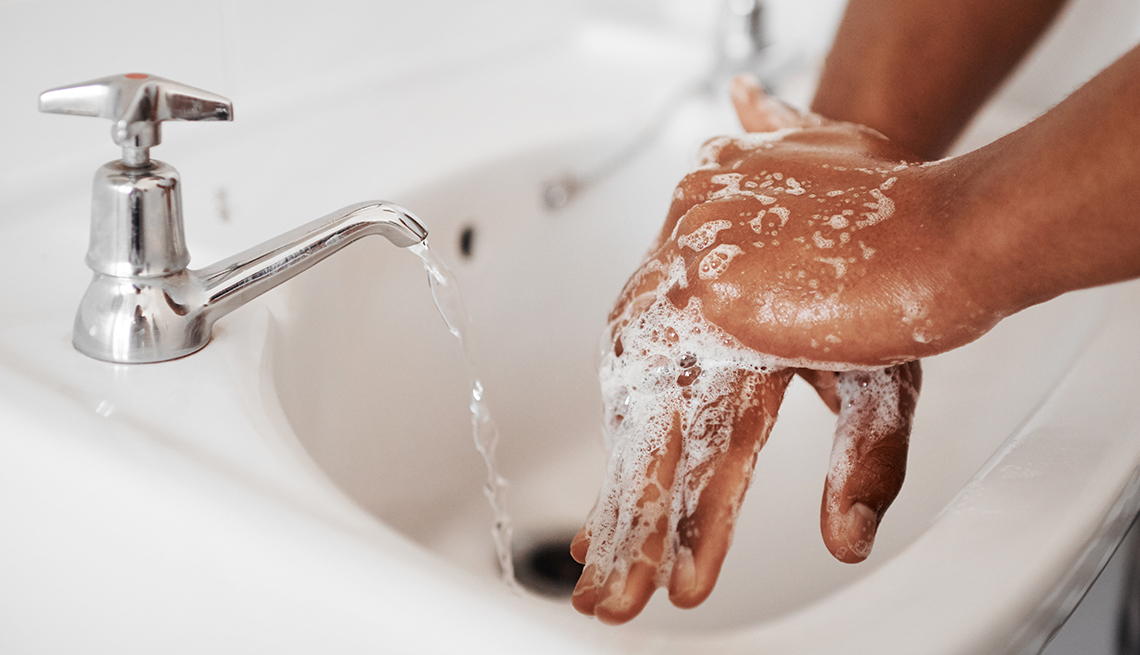 How to reduce infection risk

Residents, staff and visitors all should follow the same basic steps to reduce risk of infection, experts said:

• Stay at home if you're sick

"The grim reality is that for the elderly, COVID-19 is almost a perfect killing machine,” Parkinson told CNN. “In our facilities the average age is 84, and everyone has underlying medical conditions. So when you combine those factors together, we are dealing with perhaps the greatest challenge that we ever have had."

The government also told nursing home officials to cancel all group activities and communal dining. Residents and staff are being "actively" screened for fever and respiratory problems, according to a CMS memo that did not define the frequency of actively.

One prominent senior advocate said he worries that the government guidelines are depriving nursing home residents of important support.

"We are deeply concerned that residents are cut off from loved ones and vice versa," Richard J. Mollot, executive director of the Long Term Care Community Coalition in New York City, wrote in an email.

"We know that, in addition to providing company, love and a friendly face, families provide vital monitoring and often essential care," Mollot wrote. He urged those people concerned about the Centers for Medicare & Medicaid Services action to write their U.S. senators and representatives.

Deaths at Life Care Center in Kirkland, the Seattle-area nursing home that was the first long-term care facility in this country to have an outbreak, appear to be leveling out. Deaths totaled 37 as of midnight March 22, the last time officials reported specifically on deaths there. King County Public Health now is releasing fatality information by zip code and shows an increase of one in the past week for the area that includes the facility.

Those numbers are less than 1 percent of all COVID-19 deaths nationwide in the same period. For about a week after the virus hit at Life Care Center, the nursing home had more than two-thirds of U.S. fatalities.

"Nursing homes may have more to fear from visitors and staff carrying the virus than vice versa, as their residents are highly susceptible to the virus," Michael Dark, staff attorney at California Advocates for Nursing Home Reform (CANHR) in San Francisco, wrote in an email.

But restricting visits doesn’t mean curtailing communication from family and friends, he said. Instead, they should email, use FaceTime or Skype or even make an old-fashioned telephone call to check in.

"We are deeply concerned that residents are cut off from loved ones and vice versa. ... Families provide vital monitoring and often essential care."

President Terry Fulmer of the John A. Hartford Foundation, a New York City-based national group dedicated to improving the care of older adults, suggested that family members and residents “stay in touch with your facility and closely monitor their messages. You can ask the facility about their infection plan.”

All of these senior living communities are required to have plans to prevent and monitor infections, she said in an email.

What began March 15 as a strong suggestion from California's governor to keep all of the state's residents 65 and older, whether in senior communities or not, from venturing out even for errands has evolved into stay-at-home orders in more than half of the states.

The VA as of Thursday had almost 2,000 coronavirus cases confirmed in 48 states, the District of Columbia and the U.S. territory of Puerto Rico, including more than 300 cases in New Orleans. Only in Iowa and Rhode Island do VA facilities have no reported cases.

Most patients were quarantined in their homes, according to VA press secretary Christina Mandreucci. Sixty-eight veterans have died of COVID-19 since the epidemic began.

Most advocates continue to urge family members not to panic and say it is unwise for them to bring loved ones home to try to avoid infection.

“Moving an older adult from a long-term care center is risky and could have long-lasting impacts,” geriatrician David Gifford, chief medical officer of the American Health Care Association and the National Center for Assisted Living, wrote in an email.

The federal Centers for Disease Control and Prevention (CDC) does not recommend such moves, he said.

Others echoed that recommendation, saying germs are likely to flow more freely outside these communities than inside. Plus, residents are in nursing homes because they need higher levels of care than generally can be provided at home.

But one nursing home physician said that he would not discourage a family from bringing a relative home from a nursing facility.

“Frail elders are not going to have a lot of reserve to fight these things out,” said Karl E. Steinberg, a nursing home and hospice care medical director near San Diego and vice president of the Society for Post-Acute and Long-Term Care Medicine.

“It’s got to be a case-by-case basis. But if people have the resources, I’d strongly consider bringing them home or, alternatively, considering a small group home setting,” Steinberg said.

Ask officials where your loved one lives about staffing changes and challenges as the epidemic develops and think about whether you’re prepared to provide care at all times as a solo caregiver. Make sure you know how mobile your loved one is now because that may have changed considerably from when the resident first moved in. An environmental services employee cleans March 5, 2020, behind an infection control warning poster at the Palm Garden of Tampa Health and Rehabilitation Center in Tampa, Florida.

A CMS memo issued to states in early March advised nursing home staff to limit the sharing of medical equipment among residents. When sharing equipment is necessary, it should be properly cleaned and disinfected before it is moved to another patient.

Staff also should avoid sharing items such as pens and pads. When phones, internal communication devices or nursing stations are shared, they should be disinfected frequently, the memo said.

Advocates for older people have long criticized many long-term care facilities for staff shortages and lack of infection care. Residents and their families can consult Medicare’s five-star rating system to learn about their nursing home’s record on infection control. But the same sort of records are not offered for assisted living facilities.

Residents and family also can review CDC guidelines for health professionals. If they’re concerned that a facility is not following those standards, they can contact their area long-term care ombudsman, according to CANHR, the San Francisco-based advocacy group. 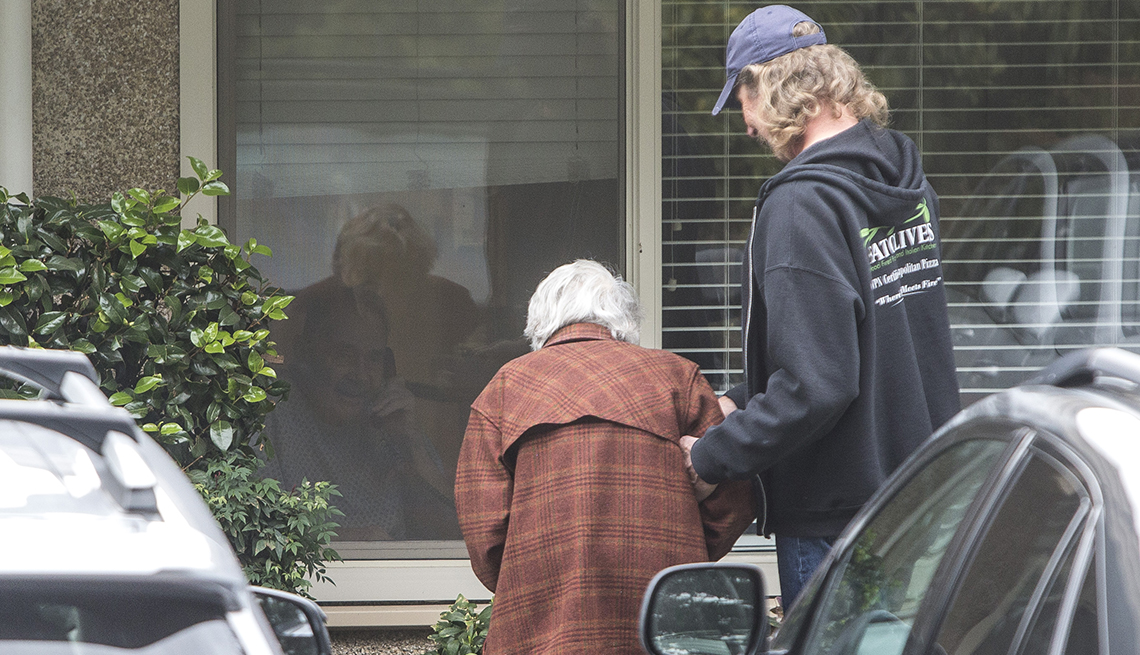 Charlie Campbell takes his mom, Dorothy Campbell, 88, to see her husband through his room window on March 5, 2020, at the Life Care Center nursing home in Kirkland, Washington, where multiple cases of COVID-19 have been diagnosed and more than three dozen patients have died.

Many long-term care facilities are having trouble getting supplies including basic surgical masks and gowns, because of hospitals’ more intense needs. For peace of mind, look online at your long-term care company's and individual facility's website for information on how they’re guarding against the virus.

Brookdale Senior Living, a long-term care company based in Brentwood, Tennessee, has placed a banner at the top of its website so people can click for more information.

If any facility has suspected cases of COVID-19, experts provide these recommendations:

• Staff should use gowns, gloves and face masks or goggles when treating ill patients.

• Residents suspected of having the virus should be placed in single rooms with closed doors.

• Dining rooms may be closed and meals delivered to all residents’ rooms.

Those who feel they must visit any group living situation for older residents should be prepared for detailed questions.

Kendal-Crosslands Communities in Chester, Pennsylvania, went from asking guests to sign in and disclose prior travel to treating every person as if they have tested positive for the virus. The continuing-care community has 500 independent living homes and apartments as well as more intensive care and now is telling everyone to shelter in place.

"Assume it's in your community and take action now," Gifford said.

Listen: Commonsense precautions can help you care for someone with coronavirus