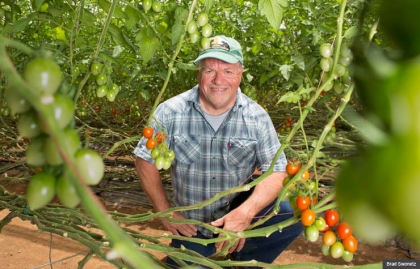 Michael O'Gorman, part-time farmer and founder of the Farmer Veteran Coalition, turned his career in agriculture into a nonprofit mentorship and job training program for military veterans.

En español | American farmers are getting older, with an average age of 57 — and climbing. Farmers 65 and older are the fastest-growing group. At the same time, military veterans returning home face a 7.7 percent unemployment rate and a host of challenges as they negotiate the often-difficult transition to working and living outside of the armed forces.

One organic farmer from California, Michael O'Gorman, 65, looked at those trends and saw an opportunity: Why not pair up veteran farmers with young military vets — many of whom hail from rural communities — to groom them for peacetime careers in agriculture?

"Everybody that I mentioned it to said, 'How come no one else has thought of that?'" says O'Gorman. "It seemed like there was something that drew people to the concept — something to do with the healing of the veterans, something to do with maybe healing for everybody. You go back to the Bible and you see the verse about turning swords into plowshares. There's a power in the transition between those two things."

So O'Gorman gathered a group of fellow farmers and launched the Farmer Veteran Coalition, a nonprofit organization that offers vets a chance to be mentored by seasoned farmers, along with a job-placement program and a fellowship fund that provides start-up grants for budding ag entrepreneurs.

Since it began in 2008, the group has given out $300,000, mostly in small grants of $5,000. It's also inspired a new documentary feature from filmmaker Dulanie Ellis, called Ground Operations: Battlefields to Farmfields. O'Gorman says he's now getting inquiries about the program from about 100 new vets each month. "I've been overwhelmed by the activity," he says. "I've found a way to pass my love of farming on to other people, and there's no more worthy group of young men and women to assist."

One program graduate, Army reservist and Iraq vet Matt McCue, 31, now raises organic vegetables in Northern California. "Farming is a very tough road," he says. "But just like in the military, what you do with it does matter to yourself and the people around you."

To learn more, go to farmvetco.org.