While more than 1 in 4 of millennials do not expect to get any benefits from Social Security, according to the EBRI survey, a Pew survey found last year that 61 percent opposed cuts.

With all the doom and gloom that swirls around the future of Social Security, it's no wonder so many people have questions about what's in store. Only 10 percent of Americans ages 25 to 69 are "very confident" they'll get as much as the program delivers today, and 18 percent believe they'll get nothing, the Employee Benefit Research Institute (EBRI) 2015 Retirement Confidence Survey found.

Yet despite the program's challenges, concerns about its long-term viability go way too far. Most experts agree that Social Security will endure as the foundation of retirement security for the vast majority of Americans — and not just for boomers but for their children, grandchildren and great-grandchildren as well.

Big majorities of the public benefit from Social Security — or will one day — so pretty much everyone wants to maintain its protections. In a 2014 survey by the National Academy of Social Insurance, 84 percent of Democrats and 69 percent of Republicans agreed it is "critical" to preserve benefits, even if that meant increasing taxes. Surveys by CBS News, the Pew Research Center and the National Institute on Retirement Security have found that Social Security is supported by significant majorities of the public — approaching 70 percent or higher.

Even young adults, the first to say "it won't be there for me," support the program. While more than 1 in 4 of millennials do not expect to get any benefits from Social Security, according to the EBRI survey, a Pew survey found last year that 61 percent opposed cuts.

Political leaders are aware of the poll numbers — which is why it's a tricky topic for anyone to tackle. Experts say this robust public support is another reason to believe our elected leaders ultimately will engage in a debate over keeping the program strong for the long term.

In many ways, the program is becoming more important in today's economy, as growing numbers of Americans face retirement without other financial resources to rely on.

Social Security provides at least half the family income for about 1 in 2 older Americans, and it provides most income for 1 in 4. In part, that's because other financial supports for retirement have weakened in recent years.

Private employer-paid pensions, which pay a set amount for life, are increasingly rare. As one measure, the number of single-employer defined-benefit pension plans protected by the Pension Benefit Guaranty Corp. plunged from a peak of more than 112,000 in the mid-1980s to about 23,000 in 2013.

And nothing has come along to truly replace them. Plans such as 401(k)s and individual retirement accounts have proved inadequate for most people. Counting part-time workers, only about half the labor force even has access to a pension or retirement savings plan through an employer. Of those with access to retirement savings plans, many either fail to participate fully or spend the money before retirement.

For these and other reasons, it is no surprise that many families have little saved for old age.

Almost half of working-age households have nothing saved in a retirement account, according to the National Institute on Retirement Security. One recent survey found that about 4 in 10 older workers have less than $25,000 in retirement savings.

Women depend on Social Security most of all. They have fewer financial resources than men on average, yet they live longer.

See also: How Do Women 50+ Feel About Social Security?

Taken together, these trends are telling a story: The need for income in retirement is growing, people will rely more on Social Security every month, and they will depend on its benefits longer than ever.

Social Security can be strengthened

Doubts about Social Security's future are based on an assumption that the financial challenge the program faces is overwhelming. How big is the long-term shortfall?

According to the system's 2014 Trustees Report (the 2015 report is expected shortly), Social Security has a $2.8 trillion surplus and can pay full benefits for another 18 years. The surplus will be gone in 2033, estimated the report, which forecast the outlook 75 years into the future. At that time, if Congress takes no action, revenue from payroll taxes would enable Social Security to pay people 77 percent of their promised benefits.

Looked at this way, for the rest of this century Social Security is about three-fourths stable and one-fourth out of balance. And from a financial standpoint, that's not overwhelming. Experts of all political stripes have suggested dozens of ideas over the years to keep Social Security strong far into the future. 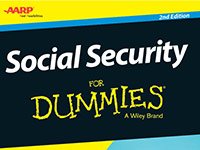 Most fix-it measures entail either increased contributions to Social Security, some modification of benefits for some or all future beneficiaries, or some combination of both. Political leaders will have to work through tough decisions, particularly over who will bear the burden of any changes.

As one often-mentioned example, consider the current wage cap of $118,500, above which no one pays payroll taxes for Social Security. Raising that cap to about $255,000 could solve a little more than one-fourth of the long-range problem, while having no effect on most workers. Advocates of this measure say it would enable Social Security to recapture the share of earnings it received in the 1980s – before a surge of income gains at the top of the ladder reduced its share. Critics say it would harm the economy and affect many workers who are not wealthy.

Other options that may be debated one day include tightening benefits in the future for the more affluent, slowly raising the payroll tax by 1 percentage point or slightly more over a period of many years, and bringing uncovered workers in state and local government into the Social Security system. Some also may call for raising the retirement age to reflect increased longevity, although opponents point out that gains in life expectancy have mostly gone to the affluent and educated.

Those are just examples from a longer list, and each has variations. Further, changes in benefits do not necessarily mean reductions. A growing number of voices are calling for enhanced benefits, particularly for low-income workers and the oldest retirees, whose Social Security payments may not even lift them above the poverty line.

With the 2016 election campaigns gearing up, AARP is urging presidential candidates to put forward their own plans for the future of Social Security and to show leadership on this vital issue. While the next debate on Social Security will pose difficult questions and trade-offs for our political leaders, one more fact remains: The sooner they act, the more moderate the changes can be.

Jonathan Peterson is the author of the newly revised AARP book Social Security for Dummies.