En español | Will Social Security be there for you? The answer is yes, but the future strength of the program depends on the outcome of a debate now raging in Washington. That debate often links Social Security to the ballooning federal deficit, although the program plays no direct role in the nation's debt and currently enjoys an enormous surplus.

"It has long been AARP's policy that Social Security should be strengthened to provide adequate benefits and that it is sufficiently financed to ensure solvency with a stable trust fund for the next 75 years. It has also been a long-held position that any changes would be phased in slowly, over time, and would not affect any current or near-term beneficiaries."

So, what's the problem? Social Security faces pressures both political and demographic. Even as it's been swept up in the debt issue, the system is bracing for a wave of boomer retirements that, combined with today's longer life spans, will exhaust the program's surplus funds over the next 25 years. At that point, Social Security would have only enough funds from current revenue to pay out about 75 cents on every dollar of promised benefits.

That scenario has younger Americans wondering whether Social Security will be able to meet their needs. A 2010 AARP survey found that just 25 percent of Americans ages 30 to 49 are confident about Social Security's future — compared with 58 percent of people 65 and over.

Here's the good news: There's time to implement small changes that can put Social Security in balance for the long term. Think of Social Security as a gigantic battleship that turns slowly: The sooner we start making adjustments, the smaller the required changes.

Read on to understand the debate, the issues, and the options.

Next: How does Social Security really work? >>

Money in …
More than 80% of Social Security's revenue comes through the FICA (the Federal Insurance Contributions Act) payroll tax, which imposes a 12.4% tax on income, with 6.2% paid by employers and 6.2% paid by workers. Two other revenue sources: interest earned on reserve funds, and income taxes paid on benefits by higher-income retirees. 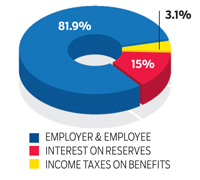 FICA revenue that isn't needed immediately is credited to the Social Security Trust Fund and invested in securities issued by the U.S. Treasury to fund government operations. Those bonds are backed by the full faith and credit of the government. When Social Security redeems bonds, that puts pressure on the federal budget.

Money out…
A formula averages and indexes lifetime earnings to determine benefits; the average monthly retiree benefit this year is about $1,180. For 64% of Americans 65 and over, Social Security provides more than half of their income. Total benefits this year: $727 billion.
Next: Why Social Security reform is necessary. >>

There's a shortfall ahead… The Trust Fund is growing and is projected to peak at about $3.7 trillion in 2022. Then it heads down as boomer retirements accelerate and bonds are redeemed. Without reforms, the reserves would be exhausted in 2036. Why? Longer life spans and lower birthrates mean more beneficiaries as a percentage of the population, fewer workers are paying into the system because of high unemployment, and we haven't raised payroll taxes for the system since 1990. Social Security needs periodic adjustment to stay in actuarial balance. That's why it's required to have a 75-year outlook on its finances. 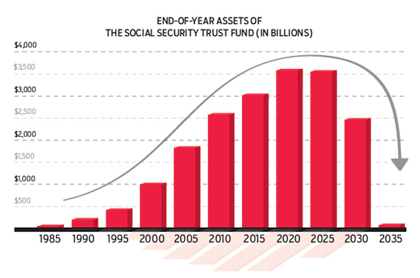 The Social Security Trust Fund is projected to peak in 2022 and — without reforms — could be exhausted by 2036.

…but it's not as bad as it looks The shortfall looks scary, but Social Security isn't unaffordable in the context of the huge U.S. economy. Benefits currently equal 4.84% of gross domestic product (GDP), and will rise to just 6.22% in 2035 and then decline, remaining between 5.9% and 6.0% of GDP from 2050 through 2085, according to the Social Security Administration. To close the funding gap, we'll need to raise revenue, lower costs, or do a little of both. 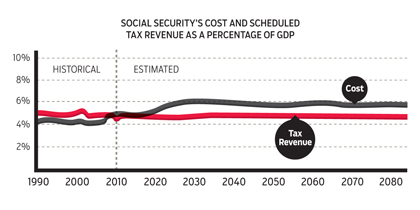 Next: Okay, so how do we fix Social Security? >>

THE OPTIONS
There must be 50 ways to fix Social Security, or at least a dozen. But most potential solutions fall into two main categories: Raise more money, or adjust benefits.
Option 1: Raise revenue
Raise the cap on income subject to FICA taxes, now set at $106,800. Lifting the cap to cover $190,000 of income closes 31% of the gap, according to an AARP analysis; complete removal closes 99% of the shortfall.
Raise the payroll-tax rate on employers and employees. An increase to 6.7% from the current 6.2% eliminates half the shortfall.
Broaden the base of income subject to FICA taxes, such as tax-excluded health benefits and flexible-spending accounts. This closes 11% of the gap.

Index benefits for longevity by paying lower annual benefits as average life expectancy increases. This closes 21% of the gap and maintains similar total lifetime benefits for each generation. (But lower-income Americans, who have shorter life expectancies, would receive a bigger benefit cut.)

President George W. Bush's proposal in 2005 to partially privatize Social Security by creating IRA-style retirement accounts was defeated, but a small contingent of policymakers and politicians continues to argue for partial privatization or even elimination of Social Security altogether.

Next: Social Security opinions: Everybody's got one. >>

Americans of all ages and political affiliations have told AARP pollsters that they want Social Security preserved in its current form, and 85% of Americans oppose cutting Social Security to reduce the deficit. But there's less agreement on exactly how to keep the program strong. 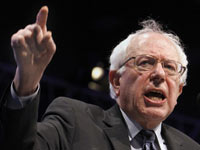 "I get a little bit disturbed when I hear folks...talking about Social Security is going broke…'We have to reduce benefits, we have to privatize it, we have to raise the retirement age.' That is all total nonsense." 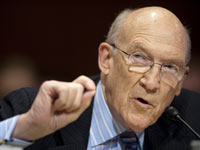 "...We've reached a point now where [Social Security is] like a milk cow with 310 million tits!" 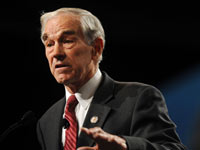 "I'd let [young people] out — just get out of the program, opt out! Restore your freedom, demand your rights to take care of yourself. And then take care of the elderly who are dependent — don't put them out in the streets."

Syndicated columnist Mark Miller is the author of The Hard Times Guide to Retirement Security: Practical Strategies for Money, Work, and Living. He blogs at RetirementRevised.com. Twitter: @RetireRevised.