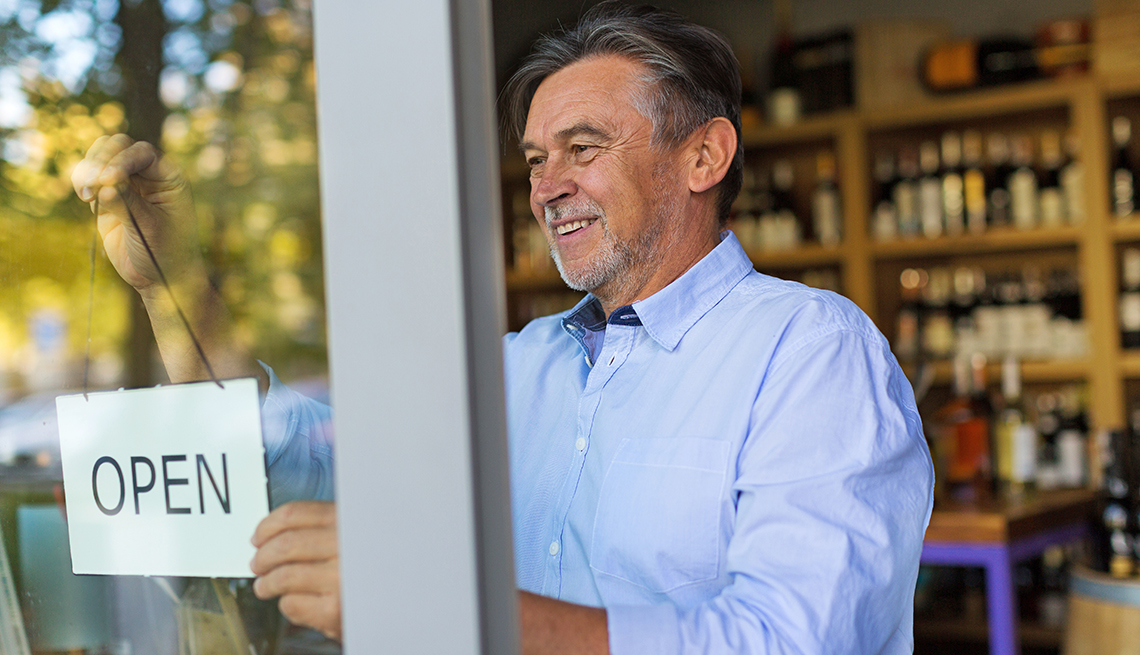 En español | Adults age 50 and older are starting new businesses at a rate that's been growing for more than 20 years — and accelerating since 2008. Many of these new entrepreneurs are using skills developed during careers to start successful businesses, all while enjoying the experiences that come with working for themselves.

"In 1996, the 55-64 age group represented 14 percent of all new enterprises,” says Susan Weinstock, vice president of financial resilience programming at AARP, citing a study from the Ewing Marion Kauffman Foundation released in September. “In 2018, it was 25.8 percent.”

"People are living longer, healthier lives,” Weinstock says. “A lot of us get to our senior years, and we see no reason to retire if we don't want to."

Looking for employers that value experience? Try AARP’s Job Board.

Starting their own business is one way older workers can apply their experience in new, fulfilling ways. Some of them have been pushed into entrepreneurship by job loss or other necessities — roughly 6 percent of the 2,700 current and aspiring business owners who responded to a survey from Guidant Financial and LendingClub this year. But the rest made the jump into entrepreneurship voluntarily. Among men, the most common reason is the desire to be one's own boss. Among women, it's the desire to follow a long-held passion. Other common reasons include a golden opportunity, a desire not to retire and dissatisfaction with the corporate world.

Thomas Mock, chair of the Asheville, N.C., chapter of SCORE — a national, nonprofit organization that pairs experienced business leaders with entrepreneurs who are just getting their start — says he sees a lot of people who “want to do something other than retiring.” One of his clients, a retired physician from Florida, started a business making toys for dogs. “She wanted to help local animal shelters and make a little money on the side,” Mock says. “This is a real dog-friendly community and a good opportunity for her."

Mock also sees many entrepreneurs who are launching their own consulting businesses, like the client who came to Asheville and started a coaching service to teach people to manage their businesses better. Consultant businesses can be convenient to start because they let you set your own hours — and they're portable, if you, like many older adults, move a couple of times yearly.

Where business is sunny

In fact, research suggests that the migration destinations that are popular with people 50 and older are, not surprisingly, also the busiest regions for start-ups among that demographic. According to the Financial Guidant and LendingClub study, the big three sunshine states – Florida, Texas and California – are, pun intended, the hottest such regions for people age 50 and older to launch businesses. But New Jersey and New York are not far behind. The three top sectors older entrepreneurs go into are business services, food/restaurant and health/beauty/fitness, followed by general retail and automotive.

No matter where they choose to start their businesses, entrepreneurs 50 and older have a lifetime of experience they can leverage to get started.

"You see older workers taking one skill from their old jobs and making it a whole business,” Weinstock says. “Let's say a part of your old job was meeting facilitation. Well, now, that can be your entire job."

Nina Horowitz-Greberman, 56, is CEO of her own social media strategy group in Ardmore, Pennsylvania. She says, “Yes, 100 percent, I do that every day. I based this business on the skills I used in my old jobs."

Don Lafferty, 59, is CEO and cofounder of Comfort Media in Bensalem, Pennsylvania. His is a niche boutique that helps heating and air-conditioning manufacturers improve their digital outreach strategies. He was once a sales executive, a good one. But he was good at something else, too: writing, “a skill,” as he says, “I always had."

In 2005, he wrote an article about using the then-popular platform MySpace for business. “Before I knew it, all these businesses were after me to help them design digital strategies on MySpace,” he says. Not too much later, he was cofounding Comfort Media.

Or you could make your fantasy your business, like Valerie Valente, 57, who opened the Journey Inn Bed and Breakfast in Hyde Park, New York, when she was 51, after a long career as a publishing executive. “I've had this yen my entire life,” she says. “I'm an early riser, and cooking is my passion — along with serving customers.”

She liked publishing, but, as she says, “to be candid, I liked being the boss and hated being the employee. So when the publishing industry started to shrink, I saw the handwriting on the wall. Something just said, ‘It's time.’ “

"I'm learning so much that's new. I had a burning desire to serve, and I'm doing it. I have a new sense of urgency."

To be sure, there are difficulties, the same ones entrepreneurs in all age groups report: getting started, funding, the sudden lack of a support system. “When you work in corporate America,” Mock says, “you have an infrastructure and maybe a sales force behind you. When you leave, suddenly you don't have that anymore.”

"And ageism is a reality,” Weinstock says, “that can hurt people's confidence starting out.”

She is founder of Let Go For It LLC in Doylestown, Pennsylvania. She began the company after 25 years in the corporate world. Her future began with her 2016 TEDx talk titled “The Unstoppable Power of Letting Go,” with more than 1.7 million views so far. That led to a website, a business and a book coming out in 2020. She advises companies and individuals on identifying impediments to forward growth, “to let go of whatever-it-is,” in her words, “for a better life and better results."

Yet even Murray has had her moments of doubt. “At 54, you ask yourself, ‘If this doesn't work, will I be able to get something as good?’ “ She overcame that hesitancy, she says, “by accepting that this was what I really, most deeply wanted, to do. Something more meaningful."

"These businesses [started by older adults] tend to last longer,” says Mock, “because these seniors are now doing what they want to do.”

They're also generally having a ball. Fully 75 percent of all respondents in the Guidant Financial/LendingClub survey reported an 8-to-10 satisfaction level on a scale of 10. That's on a business level – but even more on the personal level.

"It's been everything I hoped for,” says Valente, the bed-and-breakfast owner. “We get to know our customers, who keep coming back. We've gotten to know the business community here, and we enjoy feeling a part of the wider community."

"Oh, my God, I just love it,” says Horowitz-Greberman. “First, it gets me out of the house and keeps me busy. Even more, I love dealing with locals, I get to know people, I enjoy them. I like people looking me in the eye and talking to me."

"It has all been very personally rewarding,” Murray says. “I hear from people in India, Finland, Brazil, and the feedback has been amazing."

"A self-started business,” Lafferty says, “is designed to be rewarding. If it wasn't, you wouldn't do it.”

"Being in the 50s is such an interesting time,” Murray says. “If you get to this age, you're open to the surprises of life. With this new direction, I'm learning so much that's new. I had a burning desire to serve, and I'm doing it. I have a new sense of urgency."