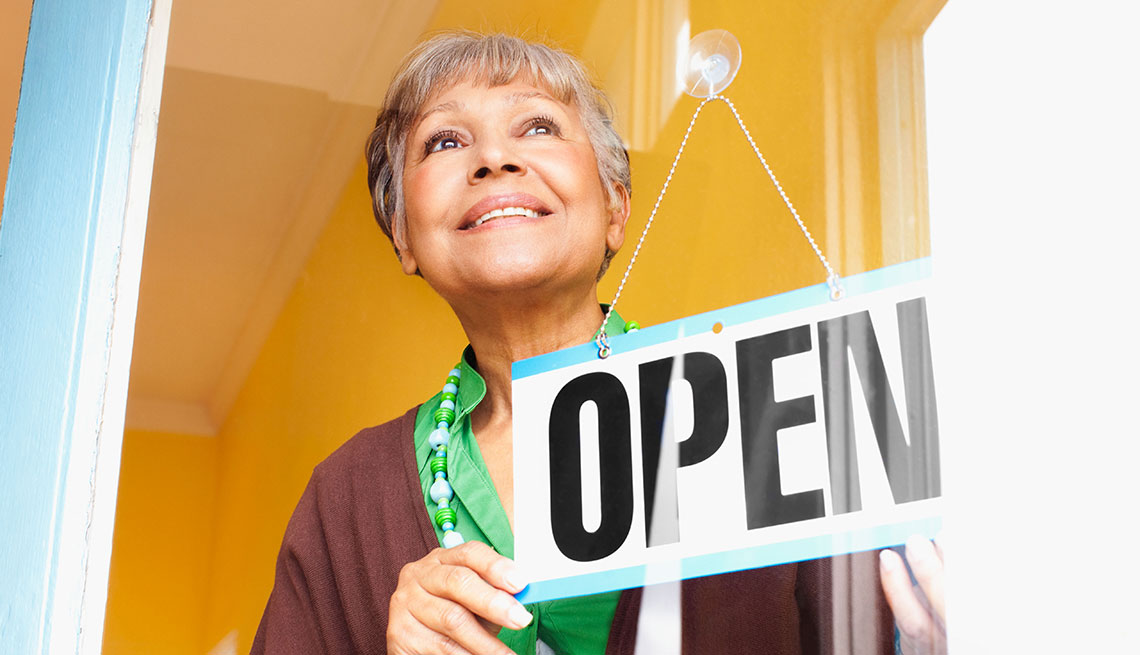 Is opening a franchise the best option for your second career? Before deciding, know the pros and cons.

En español | Many boomers eyeing a second career fancy the idea of running their own business. Yet the risk and work involved in starting a business from scratch can be daunting. One way to ease into entrepreneurship is to purchase a franchise.

Many franchises provide a full range of services, including site selection, training, product supply, marketing plans and even assistance in obtaining financing.

Evidence of their persistent popularity: The number of franchise businesses in 2014 is expected to rise by 12,915, bringing the total number to 770,368, up from 736,114 in 2011, according to the International Franchise Association.

But it can be a tricky and expensive road. An initial investment can range from $200,000 to $500,000. And it's not unusual to hear franchisees gripe about ongoing royalty and advertising fees. For example, the total investment to own a Subway franchise store can be as low as $78,600, including a $15,000 initial franchise fee. Individual costs, however, vary by location, restaurant size, build-out costs and more.

On top of that, franchisees pay fees of 12.5 percent of gross sales (minus sales tax) every week to corporate headquarters: Eight percent is for franchise royalties, and 4.5 percent goes to advertising.

That's a lot of bread.

If you are thinking about opening a franchise for your second act, here are some tips to help avoid the pitfalls from those who know the business.

One of the biggest mistakes franchisees make is to hurry into business without doing enough research and soul-searching to determine if a franchise is really a good match.

Tim Sheerer got into franchising after a career with Merrill Lynch. It wasn’t a good fit for a variety of reasons both personal and financial. The truth was that he really did want to accept more risk and run his own show.

Going the franchise route initially, though, gave him the confidence he needed later to successfully jump solo, without a net, into the restaurant business. “I don’t think I would have been comfortable leaving Merrill Lynch and opening up my own ma-and-pa restaurant without that interim move,” Sheerer says. “It would have been too big of a step."

Now, Sheerer is celebrating his 10th year in business at La Cappella, an Italian bistro in Pittsburgh, he owns and operates with his wife, Colleen.

"Many people fall in love with a concept, product or service, but don't look at what skills it takes to succeed in that business," says Jania Bailey, president of the franchise consulting firm FranNet.

What are you really good at? Time management? Customer service? Networking? If you're someone who is not able to walk into a room of 200 strangers and make 200 new friends, perhaps a heavy sales business is not for you, she says.

Franchisors are looking for people with transferable business skills such as sales, marketing, leadership, communication and customer service.

Accept that you don't call the shots

It's important to realize that regardless of the sales pitch, you're not really your own boss. If that's what you want, franchising may not be for you, as Sheerer found out. You must follow the formula. There's little wiggle room for innovation. Franchises depend on the by-the-book execution of a business plan.

In general, you have to be willing to do what you're told. "If you aren't comfortable following a system, you have no business being in franchising," Bailey says.

Do your due diligence

What happens if there's a problem at the corporate parent of your franchise? For example, Denver-based submarine sandwich maker Quiznos recently filed to reorganize under Chapter 11 of the U.S. Bankruptcy Code. And the franchise operator also has been sued by disgruntled franchisees who cited a number of grievances. This includes being required to buy reportedly overpriced food from vendors approved by the franchisor, which the plaintiffs claim has affected their profits.

After the bankruptcy filing, Quiznos CEO Stuart Mathis addressed franchisee concerns in a statement: "We look forward to continuing to work with and support our global network of franchise owners, who are the backbone of our business. Our business plan includes several key elements aimed at supporting our franchisees, including reducing food costs, implementing a franchise owner rebate program, in certain circumstances making loans available to franchisees for restaurant improvements, investing in advertising to improve location awareness, and providing new incentives for prospective franchisees."

All but seven of Quiznos' nearly 2,100 restaurants are independently owned and operated by franchisees in the U.S. and 30 other countries around the world. As separate businesses, these restaurants are not a part of the Chapter 11 proceedings and are open and operating as usual.

The franchise industry is regulated by the Federal Trade Commission, which offers a consumer guide to buying a franchise and resources to help you avoid common scams.

Step one is to request a franchisor's disclosure document. It provides contact information for previous purchasers in your region, audited financial statements, a breakdown of start-up and ongoing costs, and an outline of your responsibilities and the franchiser's obligations.

Pay close attention to the pages in the document showing franchisee turnover. Names and phone numbers of former and current franchisees in your area should be listed.

Contacting former franchisees may take some legwork, but the key is to find out why they're no longer in business. It might be, for instance, that the promised training didn't materialize for them or the robust marketing support that was touted upfront never materialized.

It's best to interview franchisees in person. Chances are that they will be more forthcoming in a face-to-face meeting. Be aware that some may have signed confidentiality agreements that prevent them from talking to you.

Be sure you have enough money

One of the biggest mistakes people make is to jump in undercapitalized, according to Bailey. "Talk to other franchisees to get a feel for a realistic reserve that you should have on hand. Always err on the side of being conservative and put more back, rather than less."

Have a savings cushion

How much can you afford to lose? Do you have a financial cushion to cover your living expenses for a year or more? If not, pump the brakes. It's essential to create a budget and figure out how much you will need to live on while your start-up gains traction.

While some franchises do break even quickly, most take 12 months or longer before a newcomer can draw a salary. While the initial fee for a franchise is clearly stated in the disclosure documents, newcomers often underestimate operating costs, Bailey says.

See what you can save with the AARP Auto Buying Program

Consider getting a loan

Many franchisees take out a loan to cover initial investment and start-up costs. You might want to try a bank where you've been a longtime customer or one that is familiar with the franchise field.

Be sure to check if the franchise you're exploring has the U.S. Small Business Administration's stamp of approval. SBA-approved franchises are ones whose disclosure agreements have been reviewed and accepted by the SBA.

Applying for a preapproved franchise loan is often easier and quicker. To find the green-lighted list, go to the Franchise Registry or to FRANdata.com. You can search by name if you have a certain franchise in mind, or by industry. Plan on a down payment of 20 to 30 percent of the loan amount.

An accountant or lawyer with experience in franchising can help you gauge the entire franchise package and tax implications.

Be willing to get your hands dirty

"Understand that the franchisor is there to support and help you, but they're not going to do the work for you. It's up to you to get up every day, show up and execute the business," Bailey says. "A lot of people think it will all be turnkey. It's not. The franchisor gives you the plan and the model, but you have to make it happen."

Kerry Hannon, AARP jobs expert, is a career transition expert and an award-winning author. Her books include What's Next? Finding Your Passion and Your Dream Job in Your Forties, Fifties and Beyond and Great Jobs for Everyone 50+: Finding Work That Keeps You Happy and Healthy … and Pays the Bills. Follow her on Twitter @kerryhannon.