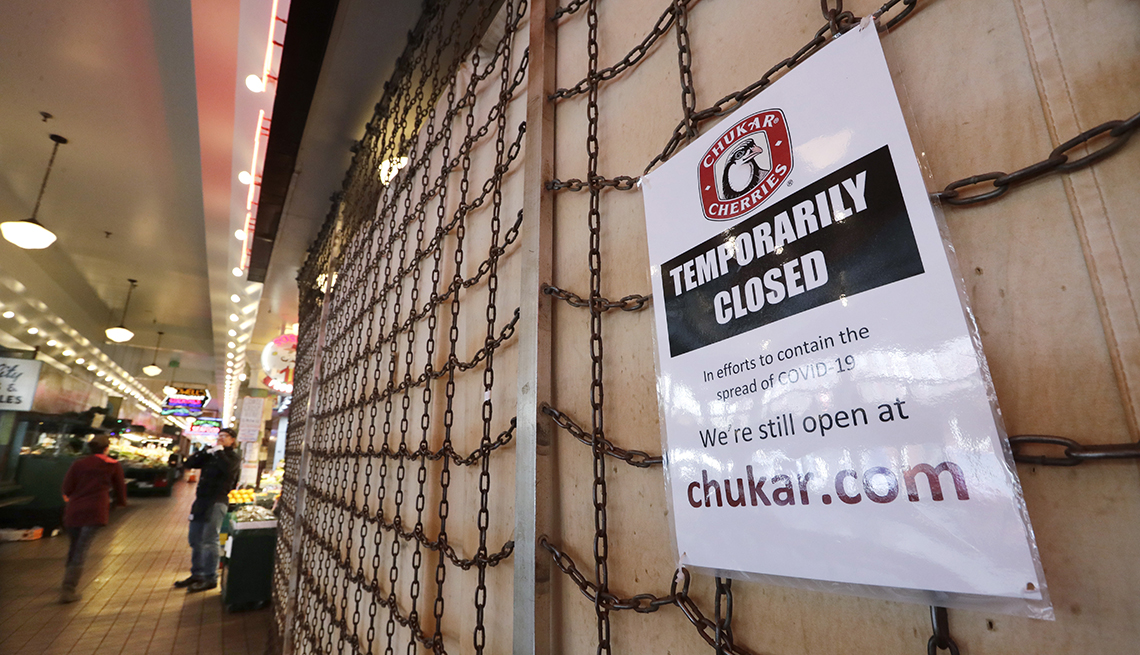 A sign explains the closure of a shop in the Pike Place Market Thursday, April 2, 2020, in Seattle.

En español | The unemployment rate for workers 55 and older rose to 3.3 percent in March, from 2.6 percent the previous month, according to the U.S. Bureau of Labor Statistics.

More than 683,000 older adults stopped working during the period covered by the March report, either because they were unemployed or left the workforce for other reasons. Because the employment surveys are conducted mid-month, that period does not include the last two weeks of the month, when nearly 10 million people filed for first-time unemployment benefits due to the nationwide shutdowns caused by the coronavirus pandemic. The overall unemployment rate for the country rose to 4.4 percent.

Looking for a new job? Start your search on AARP's Job Board

"We cannot precisely quantify the effects of the pandemic on the job market in March,” the BLS report states. “However, it is clear that the decrease in employment and hours and the increase in unemployment can be ascribed to effects of the illness and efforts to contain the virus."

The new data suggest that older workers may face difficulties in the months ahead. Many of them hold jobs that have been temporarily stopped to slow the spread of the new coronavirus. Nearly 5 million workers 55 and older are in retail positions, and another million prepare and serve food.

"Large numbers of these workers, both younger and older, have already lost or will lose employment in the coming months,” says Jennifer Schramm, senior strategic policy adviser at the AARP Public Policy Institute. “Others who keep their jobs, even those ages 60 and older, who are more vulnerable to severe complications from COVID-19, may have to continue to work for financial reasons, despite the risks. In some states older health care workers, particularly doctors and nurses, are being asked to come out of retirement to assist in responding to the pandemic."

The March report showed declines in industries across the board, including health care and social assistance. One sector that showed an increase in employment was the federal government, because the U.S. Census Bureau hired 17,000 people to help with the 2020 population count. Overall, 701,000 jobs were reported lost, according to the March report.

The federal government has enacted laws to help Americans financially during this period, including providing many (including Social Security recipients) with payments of up to $1,200 and unemployment benefits that add $600 per week to what their state would normally offer.

But the question remains regarding when the economy will stop shedding jobs. Older people also may face obstacles such as age bias upon returning to work.

"One difference between the plight of younger and older workers is that older workers generally experience longer periods of unemployment than younger job seekers, often as a result of age discrimination,” Schramm says.

More on Work and Jobs