For a second month in a row, American employers added a solid number of jobs to their payrolls, bringing the unemployment rate down to 8.8 percent, a two-year low. More than 216,000 positions were created amid other signs of slowly accelerating economic growth.

But it was a mixed picture for workers 55 and older. Women in that age group suffered a slight rise in joblessness to 5.8 percent from February's 5.7 percent level, preliminary figures showed. Men fared better, at 6.8 percent, down from 7.1 percent. 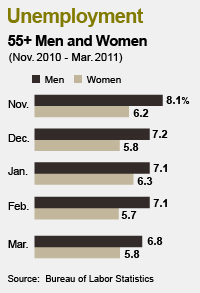 The higher rate among older women may be tied in part to continuing layoffs by cash-strapped local governments. More than 400,000 workers have lost their jobs in that sector since staffing peaked in September 2008. These included public school teachers and other jobs held disproportionately by women.

Once again, the monthly report, issued by the Bureau of Labor Statistics (BLS), showed that the hunt for work has been particularly challenging for older workers.

Their average duration of unemployment increased to 51.1 weeks as of March, up from the 46 weeks in the February survey. For people under 55, the duration rose to 37.8 weeks from 35.2 weeks in February.

The number of discouraged workers age 55 and over — people who became so disappointed with their job prospects that they recently stopped looking for work — also rose, from 241,000 in February to 260,000 in March, according to Sara Rix, a strategic policy adviser at AARP.

No silver lining for older workers

"This is another mixed report, " she says. "The rate hasn't worsened but there was no substantial increase in employment. For those older folks who are unemployed, there doesn't appear to be a silver lining."

More than three years have passed since the economy collapsed in late 2007. While many signals point upward, the job gains of recent months are doing little to get people back to work in prerecession numbers.

As many as 8.4 million people were working part-time in March, about the same as the month before, in large part because they couldn't find full-time work, the government said.

Next: Downsizing may be stabilizing. >>

The underemployment rate, which some analysts call a truer gauge of the jobs situation because it includes the unemployed as well as those working part-time, was 20 percent in mid-March. That's about the same as it was in March 2010, according to a Gallup poll published earlier this week. 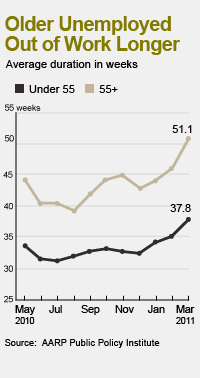 Still, job prospects were growing brighter in the private sector. Professional and business services added the most jobs in March, followed by health care, leisure and hospitality, mining, manufacturing sectors, the BLS reported. Since February 2010, total payroll employment has grown by 1.5 million.

A second consecutive month of solid gains in job growth was encouraging, says Sophia Koropeckyj, managing director at Moody's Analytics. She predicts that rising oil and gas prices will dampen the economic recovery only slightly.

"We expect the momentum to keep building throughout the year and gradually strengthen for the next couple of years," she says of job gains. "Rising oil and gas prices will take a smaller bite out of disposable income, not enough to derail the recovery."

According to the global outplacement consultant firm Challenger, Gray & Christmas, job cuts in the government sector rose to their highest level in 12 months. Government and nonprofit cuts accounted for 19,099 or 46 percent of all March layoffs.

Downsizing may be stabilizing

"Most cities and states have only just begun to address their massive budget deficits and we have yet to see how budget cutbacks are going to impact workers at the federal level," Rick Cobb, executive vice president, said in a statement. "The good news is that other areas of the economy appear to have stabilized in terms of downsizing activity."

The latest jobs forecast by CareerBuilder and USA Today also affirms that trend. Nearly three in 10 employers expect to hire full-time, permanent employees in the second quarter of this year, the same level as the first quarter and the highest since the first quarter of 2008.

The forecast, released Thursday, followed a survey of more than 2,800 hiring managers and human resource professionals and more than 5,600 workers nationwide.

"This was our strongest quarterly outlook in three years," Richard Castellini, chief marketing officer for CareerBuilder, told the AARP Bulletin.

He says that the West Coast was leading the jobs recovery, with 33 percent of hiring managers saying they expect to add to their payrolls in the second quarter, followed by 28 percent of managers in the Northeast and 24 percent in the South.

In other news that suggested the recovery is picking up steam, the number of people who filed first-time claims for jobless benefits fell by 6,000 to a seasonally adjusted 388,000 in the week that ended March 26, the Labor Department reported Thursday.

Another survey, released Wednesday by the payroll company ADP, showed that 201,000 private-sector jobs were created in March, nearly the same as the month before. The firm said that strong hiring at small businesses and at manufacturing companies explained some of that growth.

Despite positive developments on the job front, consumers continued to worry about rising prices and paltry salary increases. The nonprofit Conference Board said that consumer confidence suffered its biggest decline in more than a year, falling in March to 63.4 from a revised 72.0 in February. It was the biggest one-month decline since February 2010.