Ed Newman and Tony Nathan Team Up in the Courtroom 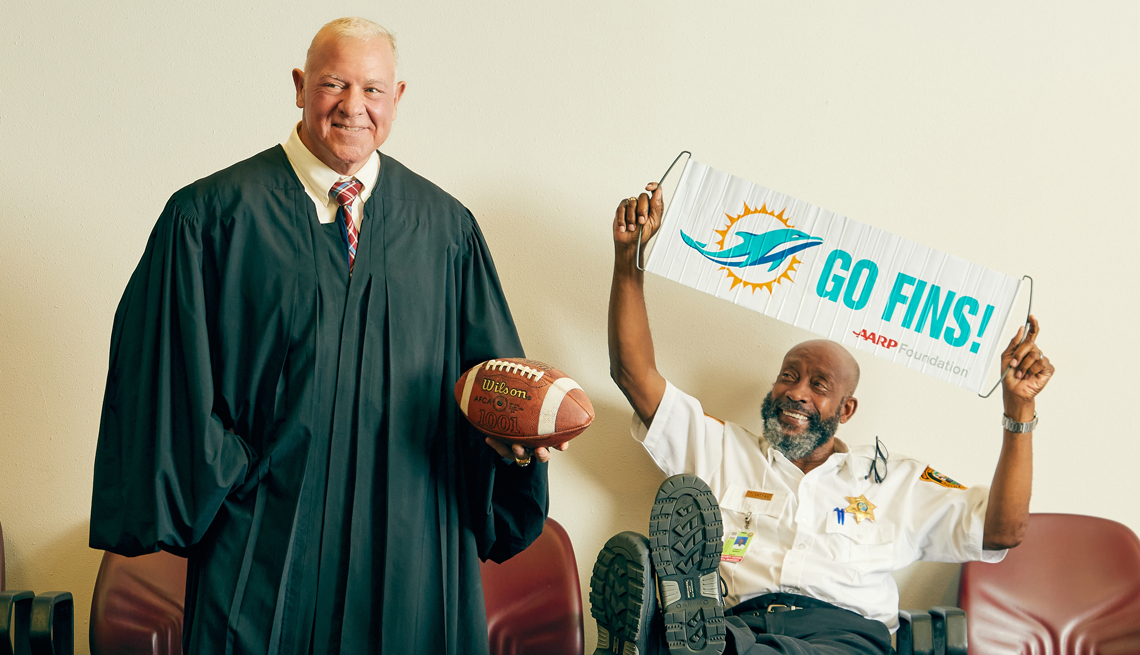 Newman, left, and Nathan show team spirit during a break in their day
Mary Beth Koeth
By:

Ed Newman:﻿ We’ve been working together, on and off, for a long time now. We met in 1979, when Tony joined the Miami Dolphins. I was a six-year vet on the offensive line by then, and I thought he was a gem. If I could get only 3 or 4 inches to block a hole for him, somehow he’d get through it. I don’t know how he did it.

Tony Nathan: Well, I always say, Ed loves to help people. He knows I don’t like talking about myself and my statistics, but I do have two AFC championship rings. Ed has those, plus a Super Bowl ring from the 1973 season. He wears it all the time.

Newman:﻿ The last Super Bowl I played in, in January of 1985, I was already in law school at night. I had always thought I was going to be a professional of some kind﻿ —﻿ a dentist or something. I went to Duke University with that in mind. But football was just so much fun that I took a little detour. And when a knee injury ended my career later that year, I switched over to daytime law school to finish up.

Nathan:﻿ My education took a different path from Ed’s. While I was at the University of Alabama as an undergraduate, I played for the great coach Bear Bryant. I joined the NFL without finishing my degree. Coach Bryant made me promise to go back and finish later, but it never seemed like there was a good time to do that.

Newman: After about a decade, I got the idea to run for county court judge. I was drawn to the role because a judge can take a part in ensuring the right outcome for a case. As a lawyer, your role is to help your client win, even if that’s in conflict with your gut feelings. I won my campaign and started on the job in January 1995.

Nathan:﻿ Meanwhile, I stayed in the league as a player and then a coach, including with the Dolphins. I also coached college football for a while. But at the end of my coaching career, I returned to Miami.

Newman:﻿ Dolphin alumni from our era are extremely close. We have a bond, because we were all scared of our coach, Don Shula. Or I should say, we were very respectful of him. Coach Shula was an extreme presence and very demanding.

Nathan:﻿ He had a way of understanding men and getting what he needed out of them.

Newman: Sometime around 2010, my reelection campaign had a party at a big cigar store in Miami, and Tony attended as my guest. The bailiff I’d been working with had told me he was leaving the job. So I asked Tony to apply; I thought working together would be fabulous. He thought I was just kidding with him.

Newman:﻿ I had to ask him about four or five times, and finally I said, “Let me talk to your wife.” So I did. And she told him, “Tony, just see what he has to say.”

Nathan: I had doubts. I didn’t know what kind of people I would be dealing with. Because if he was in the jail division, I don’t think I would have taken the job. But we handle misdemeanors, like DUIs, marijuana, batteries, and thefts﻿ —﻿ petty thefts﻿ —﻿ so I ​decided to give it a try. I do paperwork, take fingerprints and just police the courtroom.

Newman:﻿ Tony and I are like brothers now. I count on him as my best friend, and we have our football history in common. We joke about it a lot.

Nathan:﻿ Since I’ve had this job, I’ve been able to reenroll at the University of Alabama from a distance. My wife had her degree, and so did all three of my daughters, and they looked at me and said, “Well, you promised Coach Bryant you were going to finish your degree.” So I did. It was rewarding, because I was following up on a promise I had made. I kept my word.

— As told to Steve Winston

Are You Ready for Your Second Career?

Gauge your preparedness to make the leap

Second Act Careers in the Age of Pandemic