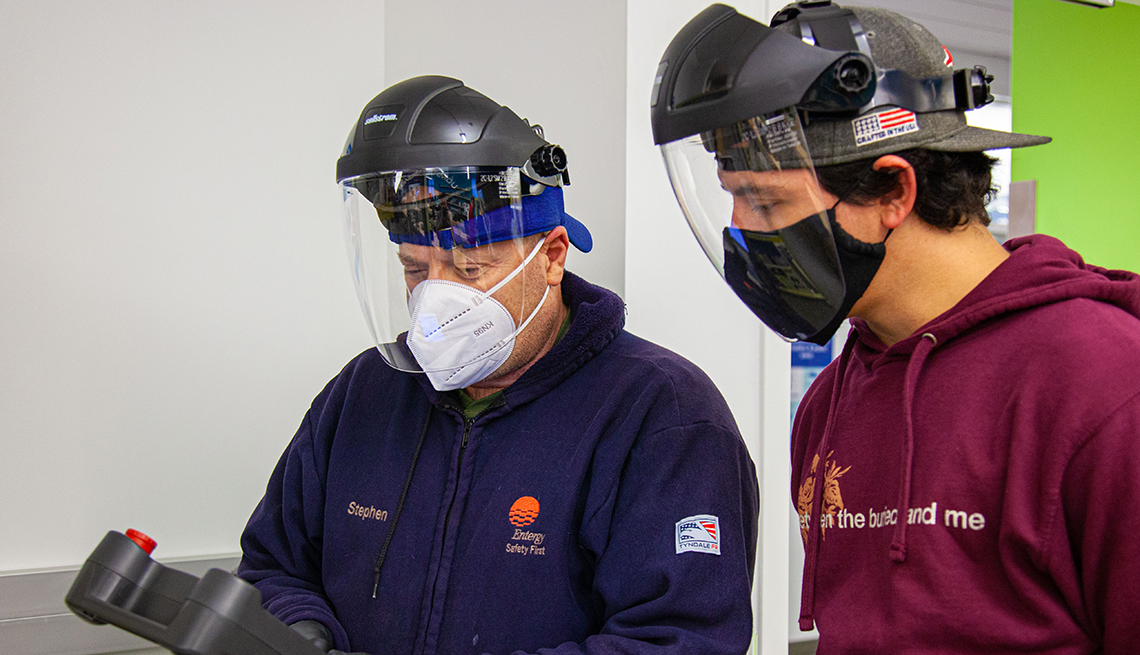 Salt shaker–sized boxes filled with colored plastic pellets glide down a track that bristles with motors, sensors and barcode readers until robotic arms lift and sort them in response to directions entered on a touch-screen keypad.

It's the modern-day version of the noisy, hot and often backbreaking factory assembly line, but this facsimile is in a spotless industrial robotics lab at Quinsigamond Community College, in Worcester, Massachusetts.

And the college, as part of a collaboration with AARP that is also being piloted in Connecticut and Florida, hopes that it will soon be buzzing with people age 50 and older who want to change careers or return to the workforce.

The idea is to help older workers and retirees find new jobs at high wages while filling a huge labor shortage in advanced manufacturing.

"If you can do this, you will get a job,” says Damian Kieran, who teaches manufacturing technology at Quinsigamond, adding that he and his colleagues hear several times a week from employers who need workers.

An estimated 4.6 million jobs in advanced manufacturing will need to be filled by 2028, according to the consulting firm Deloitte, which estimates that, if current trends continue, the industry will be able to find fewer than half that many people.

This shortfall exists even though manufacturing workers earn an average of $61,700 a year, according to the Bureau of Labor Statistics.

"They're good-paying jobs,” notes Lee Duerden, associate professor of manufacturing technology at Quinsigamond and coordinator of its Manufacturing Technology program.

There are about 6,000 unfilled jobs in manufacturing in Connecticut — home to 4,100 manufacturing companies, including Pratt & Whitney, Sikorsky and Electric Boat — state figures show.

Our older students are typically our best students. They bring the work ethic, and they bring the attitude. And if they've got experience, they can jump ahead.

Manufacturers in Florida, including Raytheon, Honeywell and Northrop Grumman, employ 360,500 people, the Florida Department of Economic Opportunity says, and the state is rebounding quickly from a decline in manufacturing employment caused by the COVID-19 pandemic.

In Massachusetts there were 6,185 openings in June for manufacturing production workers, production technicians and machine operators, according to the labor market company Emsi Burning Glass.

Red-brick factory buildings that have largely been converted into advanced manufacturing facilities surround the Quinsigamond campus, on a hill above the Greendale neighborhood of Worcester. One in 4 jobs in the area are in manufacturing, second only to the number in health care, the local workforce board says.

"We don't have old-fashioned low-tech,” says Kelley French, deputy director of the North Central Workforce Board. “We have a lot of hands-on machining, prototyping and large manufacturers."

While manufacturing in the United States is expanding, a quarter of its workforce is 55 and older, the Manufacturing Institute reports. Almost all of the institute's members who responded to a survey said they're especially worried about losing employees to retirement who have institutional experience.

That's a major reason why employers “actively ask for the older students,” observes Kathie Manning, dean of the Center for Workforce Development and Continuing Education at Quinsigamond.

"Our older students are typically our best students,” Kieran says. “They bring the work ethic, and they bring the attitude. And if they've got experience, they can jump ahead."

Some programs offer older students aid to pay for courses

In Florida students 50 and older will get their first three courses and one certification free under a collaboration between AARP and St. Petersburg College underwritten by the Department of Economic Opportunity. Each course normally costs $199, and a certification is $50. Books and course materials are also covered, along with career counseling through the college.

Connecticut residents 50 and older and those of any age who are eligible based on income and unemployed qualify for scholarships to manufacturing programs at the state's public higher education institutions. AARP Connecticut members can also get tuition discounts at several private universities and colleges.

Most job seekers in advanced manufacturing need only a certificate, not necessarily a degree. Plus, community colleges typically give credit for life experience, which makes the process even faster.

"The idea is more of, ‘Let's bring you up to speed on the things you need, rather than starting you from scratch. You already have all that,’ “ explains Jacob Longacre, associate professor of electronics engineering technology at Quinsigamond.

Quinsigamond President Luis Pedraja points out that at a community college, “you can build a credential and do it in a lot less time."

Making the training process quick is particularly important for older workers, says Christopher Cain, grant project manager for engineering technology at St. Petersburg College. “When people are in that stage of their life, they just need to get something done and get going.”

A career that welcomes older workers

Other problems employees over 50 sometimes face, such as age discrimination, tend to be less of an issue in the manufacturing industry, according to people who work in the field and those who advocate for older workers. Manufacturers, they say, are just eager to fill jobs.

"I've seen employers be very flexible,” observes Chris DiPentima, president and CEO of the Connecticut Business and Industry Association and a former division president of an aerospace company who ran manufacturing facilities in the U.S. and abroad.

"I never thought, I wonder what their health care will cost me compared to my other employees,” DiPentima says. “That was never a concern, and I've never heard any other manufacturer raise it. Quite honestly, I've seen the opposite."

That's because such things are offset by the experience that older workers bring to a sector that needs problem solvers, he and others say — who can fix a snag in the production process, without delays or interruptions.

"They have the hands-on experience, but they also have the attitude experience, which has become more and more important to manufacturers over the past decade,” DiPentima notes. Employers “are just trying to find the people who will come into work every day, be on time, work in teams."

These are essentials that older workers know how to do, says Jeff Johnson, state director of AARP Florida. “What we hear from employers is that older workers, with more job experience, just have a better sense of what it means to be a good employee."

But while manufacturers may have a high regard for people 50 and older, they have to overcome the negative perception that some prospective employees have of the manufacturing industry.

"I don't think people think of manufacturing” as a career, French says. “It's not in the forefront of their minds."

Many people think of factories as dark, dirty and dingy, DiPentima adds. But in fact, he says, production facilities today are “lean, green and clean” and look more like computer centers than the clock-in, clock-out sweatshops of the past.

"The appetite is there, the need is there, and it's really about shattering perceptions,” says Kara Cohen, community outreach and volunteer engagement manager for AARP Massachusetts.

As efforts to overcome these perceptions continue, endeavors to increase the supply of workers face yet another hurdle: not enough instructors.

That has led the AARP collaborations down a second path — namely, to recruit retired manufacturing professionals into classrooms to teach.

"The hardest thing to find is instructors who are qualified,” Cain says.

In Connecticut, AARP is helping recruit retirees as instructors for advanced manufacturing programs at both public and private colleges and universities. At one information session, recalls Nora Duncan, AARP Connecticut's state director, “we had one guy who came who was perfect, and they were all fighting over him."

Such people “make excellent instructors,” says Richard DuPont, director of community and campus relations for the Advanced Manufacturing Technology Center at Housatonic Community College in Connecticut. “They're very comfortable in the careers they've had in manufacturing. Most have mentored people in the job and like to help other people to move forward in their lives."

Bruce Fisher, a retired senior support technician at a company that makes parts for aerospace, medical and automotive clients, read about AARP's efforts to fill that demand and ended up as a welding instructor and lab technician at private Goodwin University in East Hartford.

"I think what I bring to it is, first my expertise in the manufacturing field, but I also relate to these students as if I'm working with them in a shop,” says Fisher, 67.

Mike Edwards, who was a production supervisor in aerospace manufacturing, had left his job because of the coronavirus pandemic. Then he saw an AARP posting that led him to become an instructional coordinator at the Manufacturing Alliance Service Corp., a nonprofit training program in Waterbury, Connecticut.

"This is where people over 50 who are retired or are looking for a new phase in their life can come in and impart their years of knowledge of manufacturing processes and procedures and really provide some entry-level labor to a workforce that's dying for labor right now,” Edwards, 53, says.

Back on the Quinsigamond campus, faculty show off the fabrication lab, or Fab Lab, where students use computer-assisted design, 3D printers, laser cutters, injection molding machines and other tools to make products displayed to passersby through floor-to-ceiling windows.

Students are studying precision measurement in another building, which is soon to be renovated and will also feature windows so that people outside can see the planned robotics and artificial intelligence labs.

"We think of it like we're fishing,” Duerden says. “We want to get students in here."

Experience can trump education when it comes to these remote positions

How to Get Ready for Your Next Job Interview