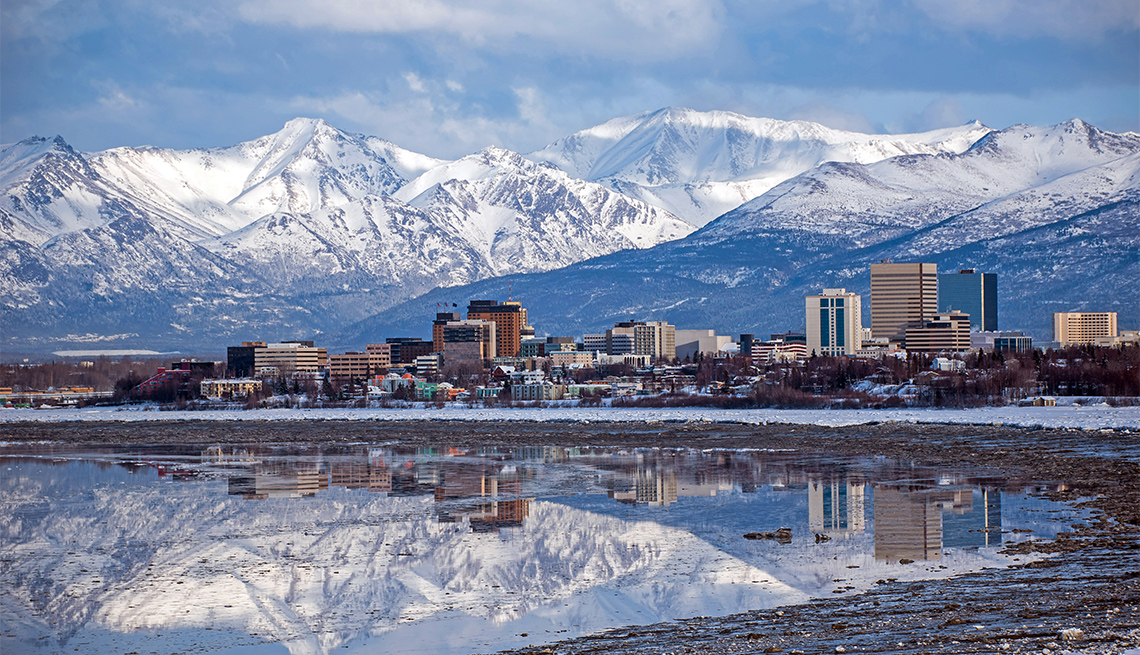 En español | Within two hours of arriving in Anchorage, I felt relaxed. My scrambling-to-finish-work, rushing-to-pack, scrunching-myself-in-an-airline-seat stress was gone — soothed by the rugged yet calming Chugach Mountains and the smoky smell of reindeer hot dogs sizzling from carts on Fourth Avenue downtown. The beer at the 49th State Brewing Company — along with its rooftop patio, which overlooks the Alaska Range and Cook Inlet — provided an additional serenity-and-suds boost.

Anchorage may be Alaska's largest city (population: 294,000), but it has a no-rush vibe that's as invigorating as the mountain views. Its residents are an eccentric, laid-back mix of rugged lifelong Alaskans and nature-loving, cold-tolerant transplants, and whether you're strolling through the weekend Anchorage Market or flowery Town Square Park, the take-your-time attitude is infectious. Maybe that's why moose and bears occasionally wander through city streets and backyards: Anchorage is just so darn inviting (a moose recently lumbered into an Anchorage hospital, apparently attracted to the lobby's plants).

Whether Anchorage is your port of call for a cruise or your base for Alaskan adventures, you'll want to visit during the peak months of mid-May to mid-September. Winters are long, cold and dark. On the winter solstice, the sun rises at 10:14 a.m. and sets at 3:42 p.m., and the average high in January is 22.2 degrees. (On a day trip to Seward, I asked a local to share his best strategy for coping with Alaskan winters. His answer: “Leave.")

Summer, however, is comfy and crisp, with an average July high of 65 degrees — perfect weather for fishing, hiking, biking, gazing at snowcapped mountains, or eating a reindeer hot dog.

More than 60 glaciers sit within 50 miles of Anchorage. For cool views from above, try a helicopter tour with companies such as Chugach Adventures and Ascending Path, which also offer activities such as kayaking to hiking.

Helicopters aren't your only sky-high possibility. You can soar in small planes for one-of-a-kind views of such Alaskan wonders as Denali, the Kenai Peninsula, Cook Inlet, the Chugach Mountains and the Anchorage skyline. The Visit Anchorage tourist bureau maintains a list of 14 flightseeing companies.

Okay, there's one downside to Alaska in summer: The sky is too bright to see the northern lights. But you can you enjoy a big-screen taste of the experience at the Alaska Center for the Performing Arts, which offers the high-def “AurorA — Alaska's Great Northern Lights,” featuring images from aurora photographer Dave Parkhurst (May 24–Sept. 1). And if you want to brave the arctic weather to see the aurora borealis in fall, winter or spring, Visit Anchorage maintains a list of tour companies.

The paved Coastal Trail hugs 11 miles of coastline, from downtown Anchorage to Kincaid Park. It's the city's most popular trail and you might spot not only moose but also beluga whales, along with views of Mount McKinley and Denali. If you'd rather bike, two rental shops are located downtown on Fourth Avenue or at the Copper Whale Inn (you can also take a bike tour with Alaska Trail Guides). A more ambitious hiking option: Flattop Mountain, about 20 minutes from downtown Anchorage, is considered Alaska's most-climbed mountain. It's a three-mile trek, though there's also a one-third-mile wheelchair-accessible loop. 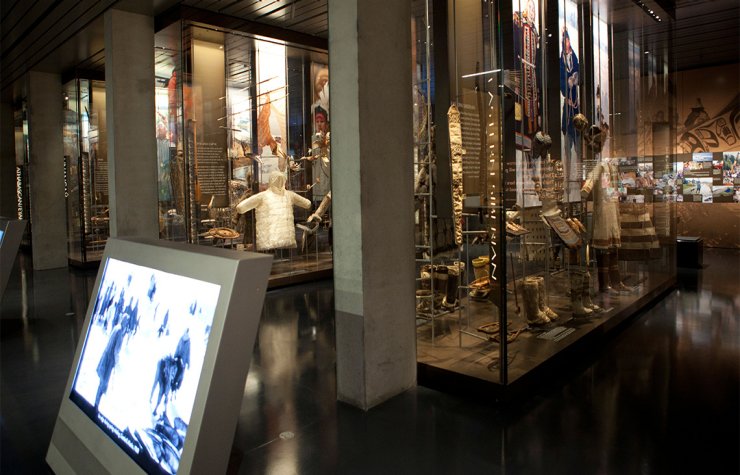 Exhibits at the Anchorage Museum

Want to learn more about Anchorage and Alaska? The Anchorage Museum is the state's largest museum, focusing on culture and history in Alaska and the Arctic. To better understand native culture, head to the Alaska Native Heritage Center (check out the six native dwellings on Lake Tiulana). And if you love animals, don't miss the Alaska Wildlife Conservation Center, about 40 minutes south of Anchorage near Girdwood. The center cares for injured or orphaned animals, including moose, bears, eagles and elk. You can take a tour with staff and even help feed some of the critters (you might also meet Dirus, a white wolf).

For more casual fare, local faves include the Glacier Brewhouse (a brewpub that serves Alaskan seafood), Snow City (dubbed “Anchorage's best breakfast joint” by the Food Network), and the Bubbly Mermaid (a small bar that serves champagne and Alaskan oysters). To sample a reindeer hot dog, head to the International House of Hotdogs.

You can also enjoy a reindeer sausage along with pizzas and local salmon at Moose's Tooth, winner of the Anchorage Press Best Pizza Award. Ice cream aficionados should check out Wild Scoops for handcrafted and occasionally unusual delights (such as the Apple Cider Donut ice cream in autumn).

If you're more into craft beers than sugar cones, Anchorage has 12 craft breweries. The newest is Turnagain Brewing in south Anchorage, which focuses on Belgian style beers, including an Alaska raspberry lambic ale. Big Swig Tours will take you to local breweries and it even offers train trips to breweries outside the city.

You'll find cheaper prices in midtown than downtown, though the options are largely chains. Prices start at $69 a night at the Motel 6. At some hotels you'll pay significantly more in summer. The Hilton Garden Inn, for example, starts at $249 a night in summer, $129 a night in winter.

A non-chain alternative is the Lakefront Anchorage on Lake Hood, starting at $129 a night. It's the city's only lakeside hotel and home to world's busiest floatplane base. It's also the headquarters for the annual Iditarod race in March.

Downtown you'll find everything from independently owned hotels to chains to bed-and-breakfasts and Airbnb properties. Boutique options include the Hotel Captain Cook, the Historic Anchorage Hotel (established in 1916), the 15-room Copper Whale Inn bed-and-breakfast and the Jules, one of the city's newest B and Bs, located near the Anchorage Museum.