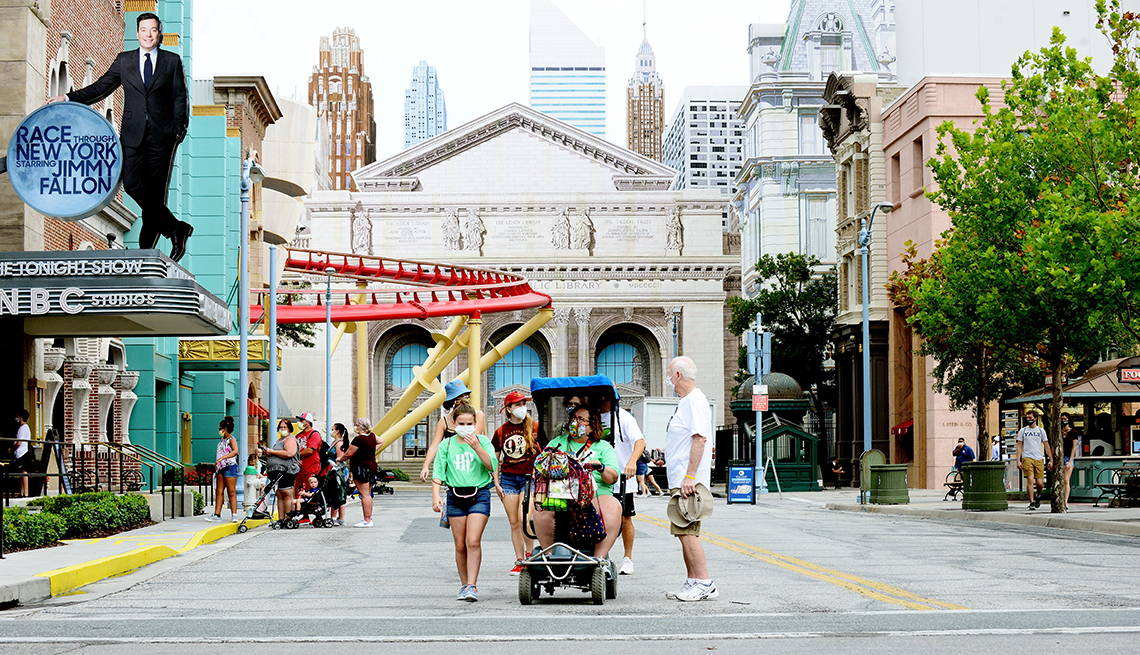 En español | Many amusement and theme parks in the United States that closed suddenly in March due to the pandemic have now opened — including biggies such as Disney’s four parks in Orlando, Florida.

But across the board, new rules and changes are in effect, such as requiring face coverings unless you’re eating or on water rides, reminders for physical distancing and handwashing, hand-sanitation stations throughout the properties, and blocked-off seats on rides to keep guests apart. (They haven’t gone as far as Japanese amusement parks, which have asked roller coaster riders not to scream because that could potentially spread the coronavirus.)

And it might take longer just to get inside the parks: All of the country’s big attractions listed below — including Disneyland, Hersheypark and Universal Orlando — are requiring visitors and employees to have their temperatures checked with a touchless thermometer. Anyone with a reading of 100.4 F or above won’t be admitted.

Bottom line: Visiting these popular amusement destinations this summer will be very different than it was in 2019. Before going, you need to assess your own risk tolerance and consider the Centers for Disease Control and Prevention’s guidance for travel, which includes asking:

Park officials’ goal will be to allow people to have fun safely. They’ll try to prevent drawing large crowds to one spot where it would be hard to stay physically distant, says Robert Niles, editor of ThemeParkInsider.com. “You’ll still be able to get your family picture in front of Cinderella’s Castle or Hogwarts,” he notes, but “don’t expect to see fireworks, big parades or nighttime spectaculars.”

Here’s more on what to expect at some of the hottest attractions around the country — with a reminder that temperature checks and masks for everyone 2 and older are required at each.

The openings come with a new reservation system and ticketing protocols that require guests to book their park reservations in advance. On July 9, Walt Disney World Resorts’ reservations system opened to the general public; it initially only allowed guests with existing tickets, annual passholders and those with hotel reservations to book. (Learn more about the new Disney Park Pass System online.) Anyone can also now purchase tickets and make hotel reservations for 2021.

Attendance is being limited, and FastPass+ service (for avoiding long waits for rides) won’t be offered.

Masks are required, but not just any mask: Be aware that neck gaiters, bandanas and the like won’t fly. Whether disposable or reusable, face coverings must be made with at least two layers of breathable material, fully cover the nose and mouth, fit securely under the chin, and be secured with ties or earloops. Disney has also announced that visitors must be stationary while eating or drinking, to prevent people from walking around with their masks off while snacking or drinking.

You’re likely to find “social distance squads” deployed throughout the parks to ensure guests follow the rules of safe spacing.

The parks are not yet confirming which rides and attractions may remain closed as the summer progresses. But count on some lines taking longer than others, including the Pirates of the Caribbean ride at Magic Kingdom Park, where the boats are sanitized and then run through the ride sans passengers to dry before welcoming the next guests. And while there are no parades or “nighttime spectaculars” until further notice at the parks, you might see a “pop-up cavalcade,” such as a float with Mickey and Minnie and friends and impromptu music, pass by during your visit.

Check the official website for status updates, and download the My Disney Experience App on your phone before you go for the most current information while you’re there.

When you can go: Disneyland Park and Disney's California Adventure Park opening has been delayed indefinitely. They were set to open July 17, on the 65th anniversary of the park’s original unveiling, but officials announced that more time is needed.

With California facing high numbers of COVID-19 cases and reclosing restaurants, bars and other businesses, says Niles of ThemeParkInsider.com, who lives in the state, “I would be shocked if we saw any major theme parks reopening here before fall.”

When you can go: June 5 kicked off Universal Orlando Resort’s phased reopening at all three of its Florida parks, including Universal Studios Florida, Universal's Islands of Adventure (home to the Wizarding World of Harry Potter) and Universal's Volcano Bay water park — and visitors are back, though not in the same numbers as before. The parks are still limiting capacity (although officials won’t say to what extent).

Visitors can either book tickets on the website in advance or walk up to a counter and purchase tickets in person the day of their visit.

Expect most of the same safety measures employed at Disney parks. Visitors’ temperatures will be taken at a screening area inside the parking structure, before the security checkpoint. Food service will emphasize grab-and-go and prepackaged options, and the park promises to increase its “already aggressive cleaning and disinfection procedures.”

Before you go, download the Official Universal Orlando Resort App, which you can use while you’re there to preorder food for pickup at participating park restaurants and to get into a “virtual line” at select attractions. The app is also useful for real-time updates on which rides are open, potential closures and estimated wait times.

When you can go: The behemoth Ohio amusement park reopened on July 9, but only to 2020 Cedar Point Season, Gold and Platinum Passholders. On July 11, the park began welcoming visitors with reservations to stay at Cedar Point Resorts properties (those guests get guaranteed entry to the theme park on each day of their overnight stay, starting the day after check-in). And tickets are now available to all park guests, with or without reservations at resort properties, but must be reserved in advance and booked through the park’s website (walk-up ticket sales and walk-up entry are not available this summer). When you go online to book the day of your visit, you’re given a selection of open time slots to choose from for when you’d like to arrive.

You’ll be required to fill out a health screening declaration on the park’s mobile app 24 hours before your visit. Use the app to make reservations and get the latest news on all the open rides and attractions. The park asks visitors to wear their masks as soon as they exit their vehicles, and keep them on throughout their visits, except when on water rides or in special RelaxZones (as long as a 6-foot distance between guests is possible). The park turnstiles are touchless; to enter, scan your season pass or daily ticket, available on the app.

When you can go: The 121-acre chocolate-themed park welcomed the general public back on July 3 (on July 1 and 2, it open exclusively to Season Pass holders). And it’s surely drawn some thrill seekers excited to try the new ultrafast roller coaster, Candymonium. On July 13, the park reduced daily opening hours (from 10 a.m. to 9 p.m., when it reopened, to 11 a.m. to 7 p.m., with the Boardwalk open from 11 a.m. to 6 p.m.). No explanation was given for the reduced hours, but it may have to do with a reduction in attendance.

Reservations must be made in advance through the park website.

Hersheypark is currently operating at half capacity and plans to continue doing so until state guidance suggests it’s safe to do otherwise. Download and refer to the official Hersheypark app for updates. 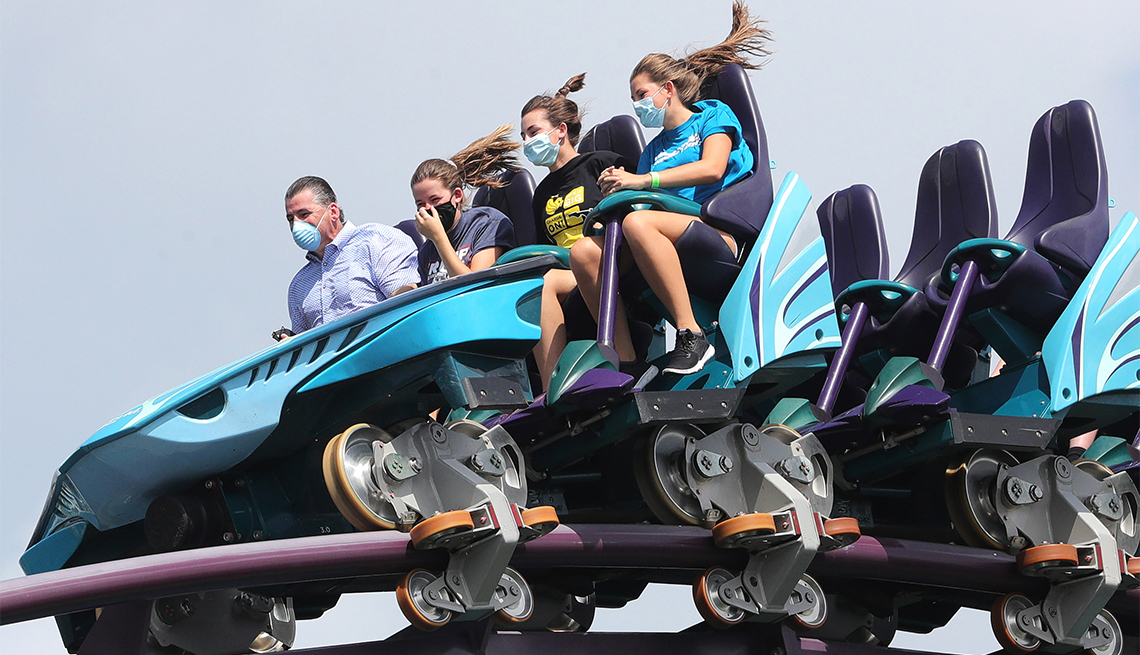 When you can go: Orlando's SeaWorld, Aquatica and Discovery Cove parks (all under the same ownership) reopened on June 11 with adjusted schedules, capacity limitations and physical distancing requirements. For guests who need a break from mask wearing, SeaWorld has designated relaxation areas, called Face Covering Relaxation Zones, where you can take masks off while staying apart from others.

Advance reservations, made online, are required (including for Annual Passholders and Fun Card holders looking for same-day tickets). The parks are capping attendance at roughly a third of regular numbers and will also be closed several days a week for extra cleaning. For now, SeaWorld is closed on Tuesdays and Thursdays, Aquatica is now open most days (check the online calendar for sporadic closed days), and Discovery Cove is closed several days a week — including Wednesdays and Thursdays, as well as many Tuesdays (again, check the calendar, with things in flux). The up-close dolphin encounters at Discovery Cove are suspended for now.

Similar protocols are in effect at the company’s parks in Tampa — Busch Gardens Tampa Bay and Adventure Island, which opened to the public June 11 and also require advance reservations. Capacity is limited to 50 percent until further notice..

When you can go: The company’s 26 parks across the United States, Mexico and Canada have different plans for opening. Six Flags Over Georgia and Six Flags Over Texas, for instance, reopened to the general public June 22. Six Flags Great Adventure in Jackson, New Jersey, reopened on July 4. Check individual park websites for the most current information.

Capacity will be limited at all parks and gradually increase throughout the year, according to state guidelines, and reservations will need to be made online in advance. Some indoor attractions and kiddie playground areas will be closed.

Editor's note: This story was originally published on June 22, 2020. It's been updated to reflect Disneyland's new reopening date.