This may not be the story you're expecting to read about a cruise. It's not that I didn't go on an eye-opening voyage from Venice to Rome on a very comfortable cruise ship, the Norwegian Jade. But my purpose was more than merely getting aboard for a routine week of sightseeing and good eating along the Adriatic coast. Rather, I went to La Serenissima, "the most serene republic" of Venice, to drop some of my husband's ashes into the Grand Canal near the Rialto Bridge, in the city where he had lived as a very young man.

Let me explain: My British husband of 50 years, Jeffrey Blyth, had worked as a foreign correspondent. Jeffrey started his career at age 16. At 20, he was a reporter for the British Army newspaper Union Jack, which was published for a time in Venice. In the course of his long career, Jeffrey was fortunate enough to visit almost every country in the world, but Venice remained the city he loved best. We went to that city, where he truly began his adult life, at least five times, usually for our anniversary, and had many happy times.

The deed was done fairly easily. No customs official inquired what was in the small stone bottle, wrapped in plastic, tucked into my luggage. No carabiniere noticed a very nervous tourist, standing on a swaying gondola pier very near the house her husband had lived in, murmuring to herself as she dropped a small bottle into the canal. That night, after dinner, as I walked through a quiet campo back to the very elegant Bauer Hotel — a place where we had stayed often and that we both loved — I felt very close to my husband, as if he were next to me and we had both had a good day in this very special place. 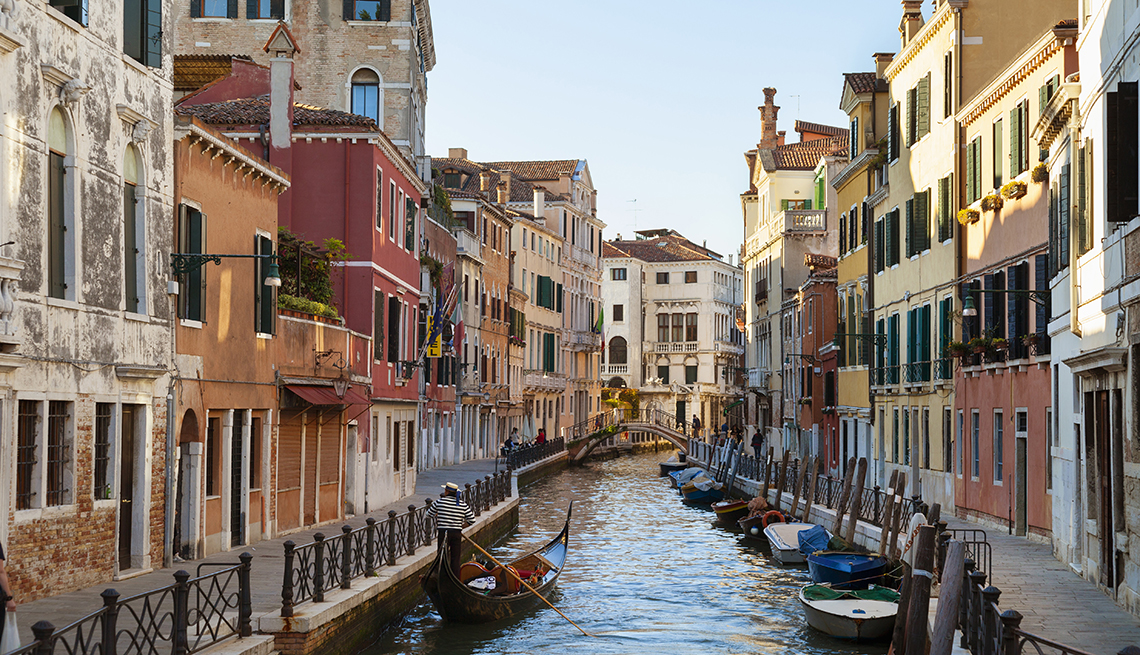 The enticing waterways of Venice, a city that is a popular launching point for cruises.

The next day I was off on my cruise, for the first time as a solo passenger. My husband and I had been on several cruises together and had always enjoyed them. I was interested to see what being alone at sea would be like; my fear, of course, was that I would be lonely. But I'm certainly in good company. AARP's new travel survey found that among frequent leisure travelers 45 and older, 37 percent have vacationed by themselves — many of them multiple times.

And Booking.com reports that, based on its 2014 survey, 72 percent of American women have embraced solo travel, with almost 1 in 2 of them citing "to get time to myself" as a top reason to vacation alone.

I picked this late-fall voyage partly because the ship would stop almost every day at unusual ports. That turned out to be a very good choice. The late-October weather in Italy and along the Adriatic coast, sunny and in the 60s, was just about perfect for sightseeing. The cities that might have been oppressive and jammed with tourists in the summer heat were uncrowded and welcoming. And because I went on tours most days, I was always busy and never really alone.

There were also surprising highlights on every shore excursion I took. The first day I went to Ljubljana, the art nouveau capital of Slovenia, where our group ran into — literally — the annual Ljubljana marathon, complete with cheering onlookers, balloons in gaudy bunches and even a marching band. And it was in Slovenia I bought the best souvenir of my trip, a lovely folk art copy of a painted panel that traditional Slovenian beekeepers once used to decorate their beehives.

The longest onshore excursion, from 7 a.m. to 7 p.m., was when we landed in the port of Naples, Italy. In one extremely fast-paced day, I took in the ruins of Pompeii, visited Sorrento for a seaside pasta lunch and then rode a ferry across the Bay of Naples to the isle of Capri — every one of them a four-star, must-see tourist destination.

And, yes, Pompeii, snuffed out in A.D. 79, is both fascinating and poignant, and Sorrento and Capri are very beautiful. Still, I wondered if some of the 1960s glamour of the latter two places hasn't faded quite a bit.

I remember a photo, tucked away somewhere, of my husband in Capri, wearing a white dinner jacket and standing beside Gina Lollobrigida. Very dolce vita. Now there are lots and lots of stores, Prada and souvenir shops intermingled, but no one in sight resembled Jackie O, fresh off a yacht and sporting white pants and espadrilles.

My biggest sightseeing bonus turned out to be Croatia. The small seaside towns of Split and Trogir are quite charming and have become tourist attractions, but the main draw, Dubrovnik, which I knew nothing about, was simply fabulous.

The old city of Dubrovnik is a UNESCO World Heritage Site, I learned, and many experts consider it to be the best-preserved walled city in the world.

Even though I'm a huge Game of Thrones fan, I wasn't aware that Dubrovnik is the setting for King's Landing in the series, too. Game of Thrones tours are available and quite popular, but what makes Dubrovnik so special is that one does not need a tour to be dazzled. All you need to do is climb and walk along the wide walls that run more than a mile around the city, wander through the marble streets of the pedestrian-only Old Town and ride the cable car for a jaw-dropping view of the red-tiled roofs and the bright blue Adriatic below. 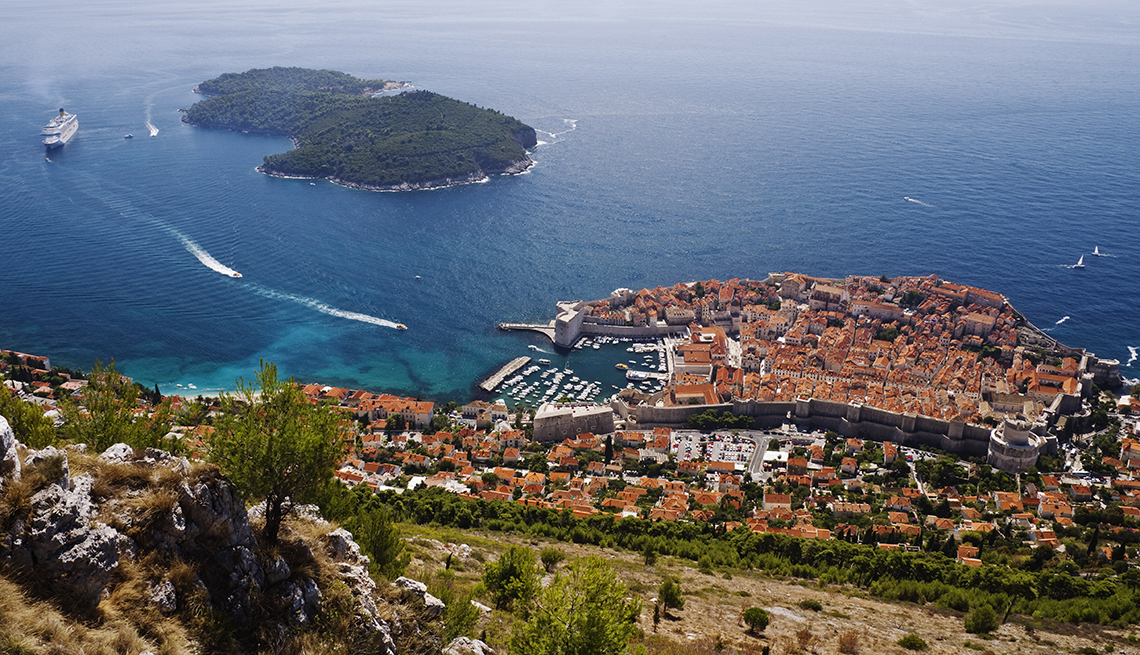 The walled city of Dubrovnik, Croatia — an UNESCO World Heritage site — is where the TV series Game of Thrones is filmed

I spent my whole day there with cruise mates — a couple from Shreveport, La. — who were as entranced as I was. They had never watched Game of Thrones. But after returning home, they emailed me to say they were now hooked on the series. I think they were also hooked on seeing their vacation spot, Dubrovnik, in the background.

Although there are so many single women on some cruises that "hosts" — men of a certain age — are employed to dance with these unaccompanied travelers, there were very few singles on the cruise I took.

At most there were five or six women traveling alone, whom I met a couple of evenings for a 6 p.m. Prosecco. Mostly there were couples, families and groups of friends traveling together, and at least a third of the passengers were Europeans.

People were friendly, including a couple from Edinburgh, Scotland I had dinner with one evening. Between the crab cake appetizer and the butterscotch parfait, I learned they had voted for Scottish independence last September, loved Las Vegas, operated a nightclub and once had a business exporting karaoke machines to China. "Not much profit in that, luv," they told me.

The people I spoke to aboard had varying opinions about the ship and its services. Some liked the casual atmosphere and that you never had to dress up in the evenings. Others were disappointed they didn't get a chance to wear the cocktail dresses they had brought. A few dozed through the nightly shows — which, in general, got a standing ovation from most of the audience. Almost everyone enjoyed the food and appreciated the variety of specialty restaurants, where one could have dinner for a small surcharge, as well as the main dining rooms.

One of my fellow singles told me she was a veteran of 60 — yes, 60 — cruises. The week on the Norwegian Jade — beginning at $900 — was a great value, she said, though note that my particular cruise now has a revised itinerary.

When I came back home, I was glad I had gone once again to see a city I love and discovered a memorable new destination. And a few days after I returned home, I dreamed about my husband for the first time since he had passed away. It was amazingly realistic, the way such dreams usually are. I truly felt I was talking to him. I knew he was away, and I felt concerned about him and perhaps even a little jealous, as if he were with other people, doing things without me.

Most important of all, I told Jeffrey I had traveled to Venice, but he already seemed to know. I told him that I wished he had gone with me and that I missed him.

When I woke up, I was alone — and missed him even more.