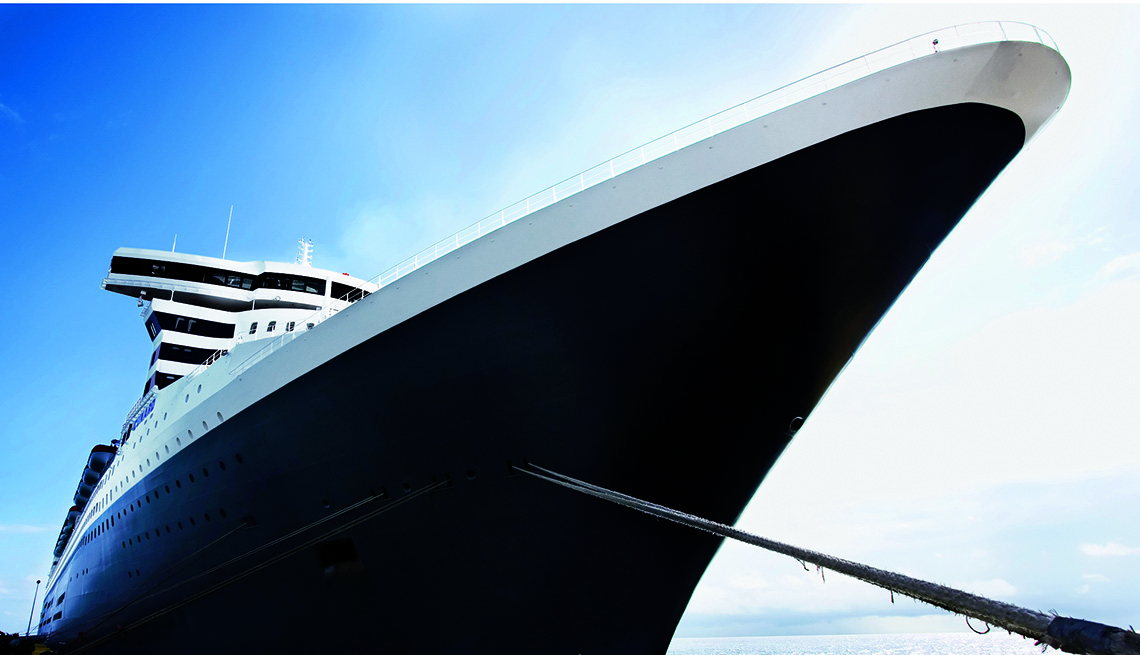 For cruise-ship lovers, bigger can be better...but not always.

I’d been on the world’s longest megaliner, Royal Caribbean’s Allure of the Seas, for two days shortly after its maiden voyage in December 2010. As I rode a glass elevator up, up, up through the ship’s expansive atrium, two women chatted about how much they loved the ship.

“You know,” one excitedly said, “I haven’t even seen the ocean yet!”

To some, that might be the ultimate indictment of the new trend toward cruise ships such as the Allure,which could contain almost five Titanics. But for those women, sailing the Caribbean on a floating megalopolis (that atrium, named Central Park, boasts a tree-studded football-field-size glen with a meandering path) was perfect.

I long ago decided that when you figure in the costs of lodging, food and transportation, cruising is by far the most economical way to see the world in comfort — even with a family in tow. What’s more, because cruise ships come in all shapes and sizes, if you scan the horizon long enough, you’ll spot a vessel that’s perfect for you. 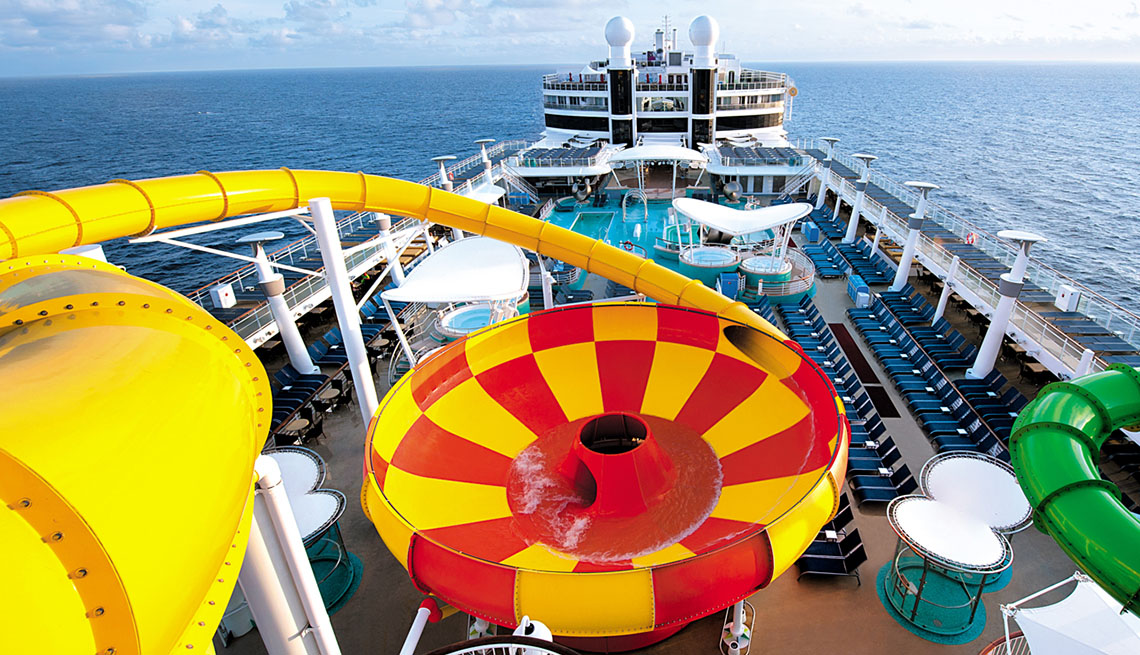 The megaship Norwegian Epic features its own water park.

The best news for vacationers is this: More cabins require more passengers and on megaships, good deals are pretty easy to come by. After reigning as one of the Caribbean’s most expensive ships a year ago, Royal Caribbean’s Oasis of the Seas is down to just over $100 a night per person for an inside cabin.

Target travelers
“Families take over these cruises,” says Carolyn Spencer Brown, editor in chief of Cruise Critic (cruisecritic.com). “There's something for everyone.”

Entertainment
In the 1980s I sailed on Royal Caribbean’s now-defunct Song of Norway, and one night’s featured entertainment was, no kidding, a guy playing the entire 1812 Overture on an accordion. Today’s megaship features at least one Broadway-type theater — and a show to match: Royal Caribbean has been staging Saturday Night Fever, Mamma Mia! and Cats, while Cunard’s Queen Mary 2 offers a domed star show created with NASA. For quieter pursuits, Holland America’s Eurodam has paintings by Dutch masters and the line’s Rotterdam features exact replicas of China’s famed terra-cotta warriors.

Pools
Take your pick: You’ll find at least two and as many as five.

Cabins
Even on the biggest ships, cabins aren’t much larger than the one the Marx Brothers spilled out of in A Night at the Opera. But the days of little portholes are gone — in an outside cabin, chances are you’ll enjoy a nice balcony or large windows. What’s more, Disney has given a new life to those formerly dingy inside cabins: On the cruise line’s newer Dream and Fantasy ships and on the upgraded Magic, above the bed you’ll find a “magical porthole” with a high-definition screen behind it. Cameras mounted up on deck beam the outside view all day long, and the result is an uncanny sense of seeing a live through-the-glass view.

Dining
You can still head to the formal dining room, but the biggest ships pride themselves on offering countless dining options, from sprawling buffets to poolside grills. You’ll also find premium restaurants that offer a fine dining experience worthy of a big city — for a reasonable extra cost. The gourmet menu at the Disney Dream’s adults-only restaurant Remy — yes, named after the animated rat in Ratatouille — will run you an extra $75, but it was created by chefs Arnaud Lallement and Scott Hunnel. At Holland America, all 15 ships have menus created by a “Culinary Council” that includes master chef Rudi Sodamin, along with renowned international chefs Jonnie Boer, David Burke, Jacques Torres, Elizabeth Falkner and Mark Best.

Destinations
Because of their size, megaships largely stick to ports with big facilities — places such as the Bahamas, Mexico, the Caribbean, Asia and the Mediterranean. 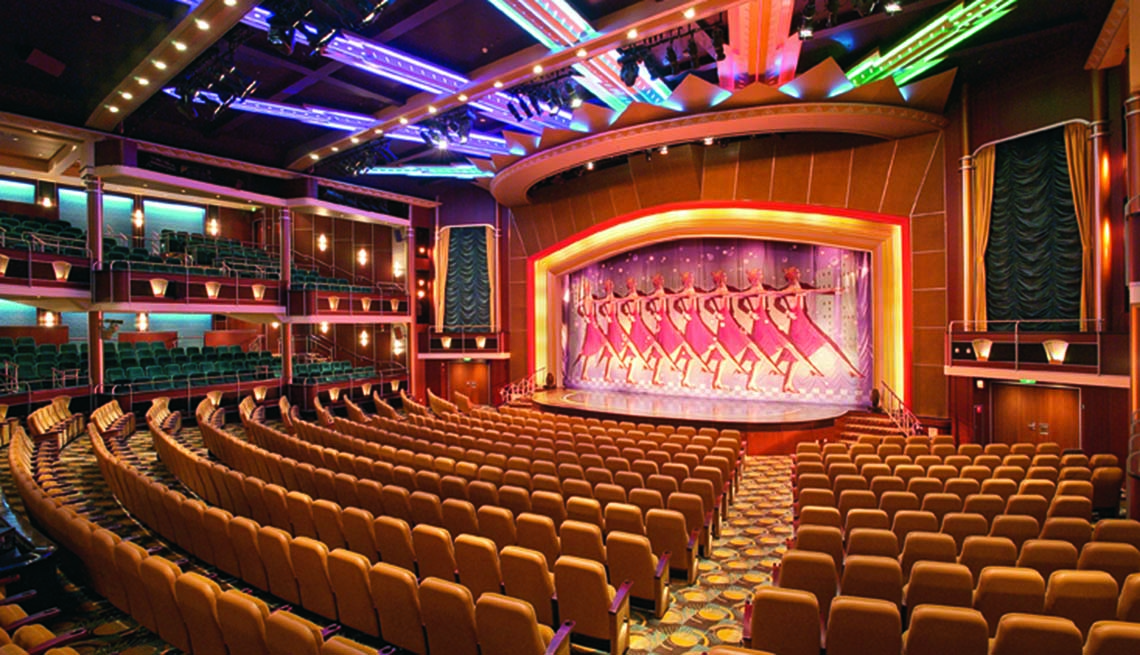 The luxurious, intimate theater on the midsize ship Mariner of the Seas.

Target travelers
“These boats cater to the traveler who is interested in fine dining and service — not rock climbing at sea,” says Clem Bason, CEO of DealBase, an online travel business. Before ships like the Oasis of the Seas set sail, these were the megaships. Now they can be an excellent value for travelers who want to enjoy traditional cruise-ship amenities. “They’re more cozy,” adds Brown of Cruise Critic. “You get to know your bartender.”

Some midsize ships enhance the experience even further by taking on fewer passengers: While many ships measuring just over 800 feet long will hold more than 2,000 guests, premium ships such as Crystal Cruises’ Crystal Serenity will host just over half that many. That means a lot more crew attention for you. (Once I walked onto the Serenity deck and a crew member chirped, “Can I get you a deck chair, Mr. Newcott?”) But it comes at a higher price. A cabin on premium midsize ships such as Serenity will cost you between $300 and $500 a day.

Entertainment
Everything’s a tad smaller: Rather than a Times Square theater, the stage venue on a ship such as Holland America’s Noordam more resembles a good Las Vegas lounge.

Pools
You’ll find more than one, but they can be small, and it’s harder to escape the poolside games.

Cabins
Most of these ships, built before cabin balconies became hot in the 2000s, have added them.

Dining
In addition to the formal dining room, there are several eat-on-the-run spots. The Noordam’s casual dining area is a typical buffet, though with tablecloths and linen napkins. 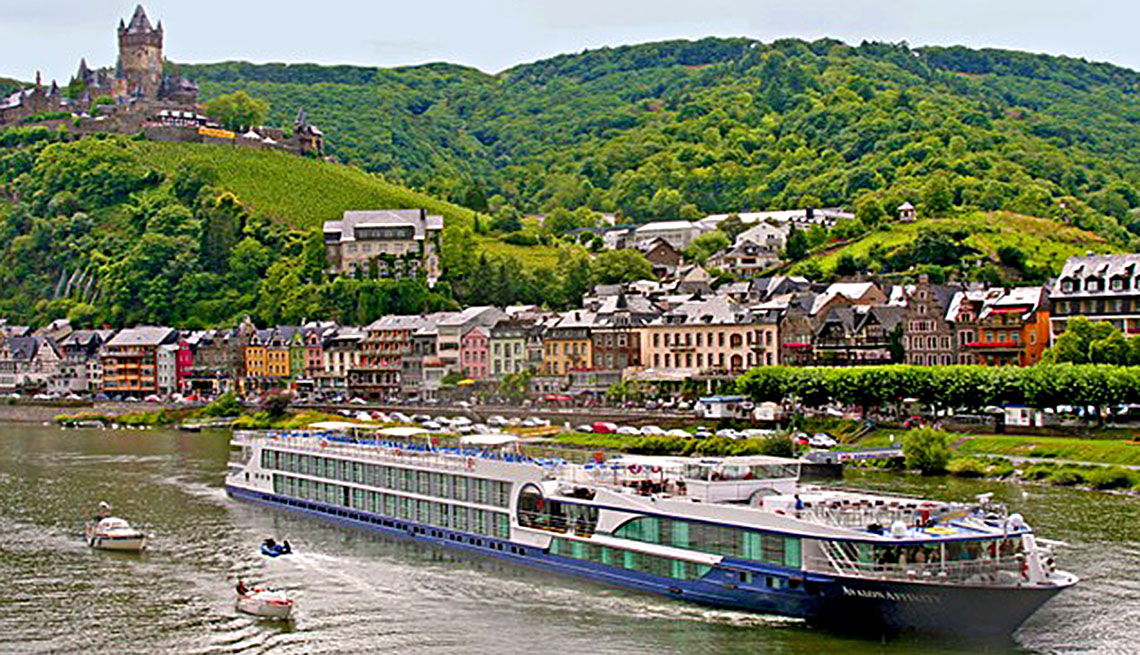 Passengers can ply the waterways of Europe, Asia and Africa on a sleek craft such as the Avalon Affinity.

Target travelers
Sophisticated vacationers and couples enjoy the lack of hubbub on these ships. “They offer superior service, dining and accommodations,” says Bason of DealBase. “They often have 1-to-1 crew-to-guest ratios; the Oasis of the Seas ratio is about 1-to-2.25.”

River ships are another type of small-boat option. For as little as $250 a day, you can ply the waterways of Europe, Asia and Africa on a sleek craft via lines such as Avalon, Grand Circle, Vantage or Viking River Cruises. In the United States, Blount Small Ship Adventures and American Cruise Line sail the nation’s great rivers for between $300 and $635 a day. More so than with large ships, riverboat lines often offer good deals on air-inclusive fares.

Entertainment
Oceangoing small ships have intimate theaters and cabaret-type shows. Riverboats often limit their entertainment to local performers; in Vienna, Viking took us to a lovely Strauss concert at the Auersperg Palace. Most European river cruises include shore excursions in the price — a big savings over most ocean cruises. In Nuremburg, Germany, Grand Circle now includes a visit to Room 600, site of the Nazi war crime trials.

Pools
Seagoing small ships often have one very nice pool; river ships will occasionally have a hot tub. But small-ship designers tell me those facilities primarily appeal to travelers at the brochure stage. “The only people who use the hot tubs,” a Rhine River captain told me, “are the crew.”

Cabins
Ocean small ships have standard-size cabins, and in recent years riverboat designers have found ways to make their tiny cabins seem larger. Miniature balconies with sliding glass doors help a lot, but over the course of a week, you’ll definitely master a sideways shuffle. In a major breakthrough for river touring, Vantage has introduced cozy single cabins with a twin bed on its three newest ships — an option that eliminates the dreaded “single supplement” charge that can make traveling alone prohibitively expensive. Vantage now has the single cabins on three of its newest ships.

Dining
Some of the world’s finest restaurants can be found on small oceangoing ships. The menus are breathtaking — and you’ll be treated as if you’re sitting at the captain’s table. Although the quality of small-ship food is improving on river ships, most have kitchens that are roughly the size of a minivan interior. Your best bet: Wander ashore each night and seek out the local restaurants and pubs where the neighbors have been eating, perhaps for centuries.