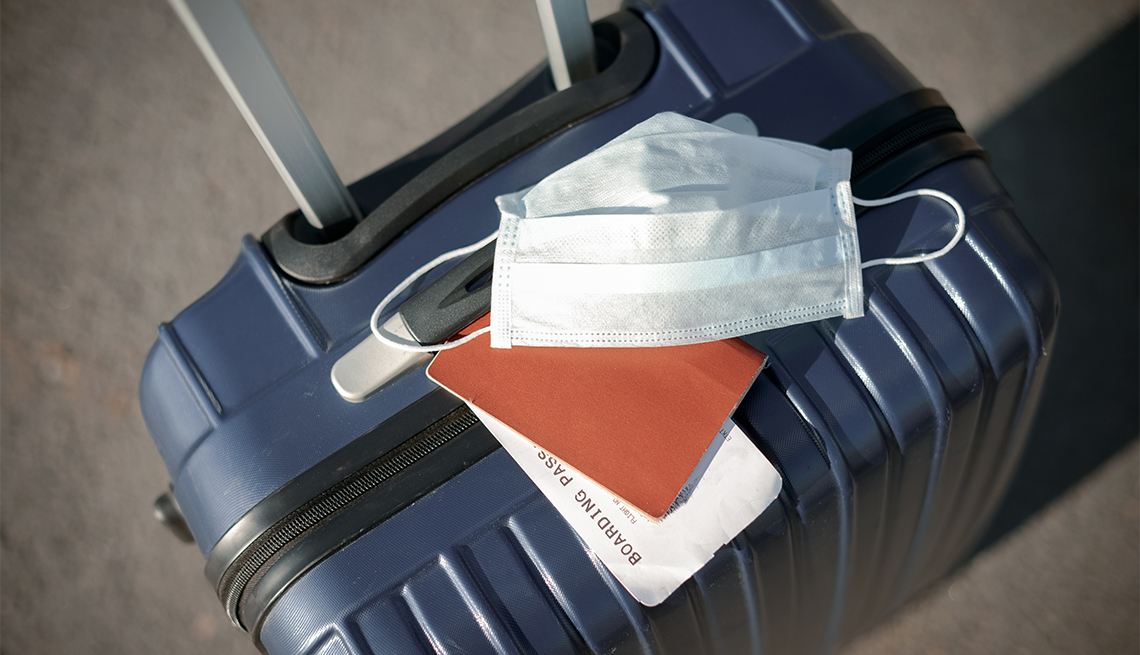 • American, Delta, United and Alaska Airlines have announced that they will no longer charge change fees (typically $200) for most tickets on U.S. flights. The new policy won’t always apply to Basic Economy tickets, however; each airline will again start charging change fees to those lower-priced tickets bought after a certain date (Sept. 30 on American; Dec. 31 for the others). Before United announced its new policy on Aug. 30, Southwest was the only major airline with a permanent no-fee change policy.

• The Centers for Disease Control and Prevention (CDC) no longer suggests that travelers quarantine for two weeks after traveling internationally or to areas with high rates of COVID-19. It has removed that recommendation from its site, though continues to emphasize that staying home remains the best way to avoid getting sick because no form of travel is completely safe. Its recommendations include wearing a mask in all public areas, not traveling when you’re sick and, when possible, using remote check-in at hotels and contactless payment methods.

• Airbnb, the home rental platform, announced a global ban on all parties and events at Airbnb listings, including a cap on occupancy at 16, due to a concern that COVID-19 is spread in confined, crowded spaces. “This party ban applies to all future bookings on Airbnb and it will remain in effect indefinitely until further notice,” the company notes on its site.

• The State Department has lifted its global travel advisory against U.S. citizens traveling internationally; it’s gone back to country-specific advice, due to “health and safety conditions improving in some countries and potentially deteriorating in others.” But many countries, including those in Europe, aren’t allowing visitors from the U.S.

• The number of airline passengers screened by the Transportation Safety Administration (TSA) has ticked up from about 80,000 a day in mid-April to about 809,000 on Sept. 13, though it’s still down substantially from nearly 2.5 million on that day a year earlier.

For travel within the U.S. the CDC suggests asking:

Nearly 20 U.S. states have requested or mandated quarantines for travelers or residents returning from other states. But rules vary widely and change with the COVID-19 numbers, with different penalties (if any) for noncompliance and definitions of what quarantine means. (Check each state’s official website for guidance, or see our story detailing state rules for travelers.)

The CDC notes that while “we don’t know if one type of travel is safer than others,” air travel can make social distancing particularly difficult. Here’s what to expect and how to lower your risk if you fly.

“Bring some alcohol wipes with you and wipe down anything you’re going to touch,” says Robert Murphy, M.D., professor of infectious diseases at Northwestern University’s Feinberg School of Medicine.

The major airlines also have said that passengers who refuse to wear masks onboard (except when they are eating or drinking) will not be allowed to fly; they are also requiring customers to wear face coverings throughout airports they serve. “If a customer is unable to wear a face covering or mask for any reason, Southwest regrets that we will be unable to transport the individual,” Southwest said in a statement. Those who don’t comply risk being banned from future flights.

The TSA is asking travelers to use enhanced precautions during airport screening, including putting personal items such as wallets, phones and keys into carry-on bags instead of plastic bins, and staying 6 feet from others waiting in line. TSA officers are required to wear masks and gloves, and to change gloves after a passenger pat-down, and travelers are encouraged to wear masks as well.

Passengers are allowed to bring liquid hand sanitizer in a container that’s up to 12 ounces in carry-on bags; previously, liquids could be in containers of no more than 3 ounces. And they can board flights with driver’s licenses that expired beginning March 1, 2020, “to use it as acceptable ID at checkpoints for one year after expiration date, plus 60 days after the COVID-19 national emergency.” (Some people have been unable to renew their licenses due to the outbreak.)

And note that you now have until Oct. 1, 2021, before you’ll need a security-enhanced Real ID instead of a regular driver’s license in order to get through airport security. The deadline was delayed a year.

"Wipe the area down where you’re going to be sitting, and the armrests and the tray table — anything you touch,” Murphy says. “If there’s a touch screen or control or something, you need to clean that before you touch it.”

He adds: “If anybody around you is sick, get off the airplane.”

The airlines are doing what they can; many are requiring masks on passengers and crew and boarding from back to front. Some are blocking middle seats to allow for social distancing (Delta says it will do so through Jan. 6, 2021). And all of the major U.S. airlines’ planes “are equipped with high-efficiency particulate air (HEPA) filters, which clean the air,” according to the industry advocacy organization Airlines for America, which details each airline’s cleaning protocols. Southwest reports, for instance, “We deep clean each plane from nose to tail for nearly 6-7 hours every night.”

United Airlines says “if an employee or customer is exhibiting potential coronavirus symptoms, the aircraft is taken out of service and sent through a full decontamination process.”

Providers are trying to address travelers’ concerns about upcoming trips by introducing temporary reprieves on change or cancellation penalties (see more on airlines’ policies below). They’re also allowing no-fee changes and cancellations on new bookings, as well as steep discounts in some cases.

Many tour operators have suspended trips in the near future: The nonprofit educational travel company Road Scholar has canceled all programs through October, for instance. It’s allowing travelers who book new trips by Oct. 31 to get a full refund if they cancel up until 90 days before their program begins. Collette is making decisions on program cancellations on a case-by-case basis 30 to 45 days prior to departure.

With the CDC’s no-sail order for cruises in effect until Sept. 30 (when it may be renewed), the major U.S. cruise lines have suspended itineraries into the fall — or later. Viking has canceled departures through the end of 2020; Holland American won’t begin until at least Dec. 15.

Canada is prohibiting cruise ships with more than 100 passengers from arriving at its ports until at least Oct. 31, so those northern itineraries are canceled.

Hotel chains have also loosened their cancellation policies, waiving change and cancellation fees that would normally apply to nonrefundable rates.

Amtrak is waiving change fees for reservations made before Sept. 30; you can make changes online, but for cancellations and refunds, you need to call 800-USA-RAIL. Many of its routes are operating on a reduced schedule. Passengers are required to wear facial coverings both at the station and onboard unless they are in a private room. (Read more about Amtrak’s safety procedures.)

The major airlines have a range of policies. Be aware that if an airline cancels or significantly delays your flight, you are entitled to a refund, as mandated by the U.S. Department of Transportation.

Alaska Airlines has eliminated change fees “on Main and First Class fares everywhere Alaska flies”; fees will again be charged for changes to Saver fare tickets bought on or after Jan. 1, 2021. Customers must pay the fare difference if the new flight is more expensive.

American Airlines has eliminated change fees for tickets on domestic flights, as well as flights to Canada, Mexico, Puerto Rico, U.S. Virgin Islands; it will be permanent for some classes of tickets, but fees will again be charged for changes to Basic Economy tickets bought by Sept. 30, 2020, for travel before Jan. 1, 2021. Customers must pay the fare difference if the new flight is more expensive. Travelers can also fly standby on earlier flights for the same destination on the same day at no charge starting Oct. 1, 2020.

British Airways (an AARP member-benefit provider) says that it will not charge a change fee for bookings made from March 3 through Sept. 30 for journeys that are due to have been completed by Aug. 31, 2021, though customers will need to pay any fare differences. Travelers who choose to cancel a flight that was due to be completed by Sept. 30 will receive a voucher toward a future flight completed by April 30, 2022.

Delta has eliminated change fees for tickets on domestic flights, as well as flights to Puerto Rico and the U.S. Virgin Islands; it will be permanent for some classes of tickets, but fees will again be charged for changes to Basic Economy tickets bought on or after Jan. 1, 2021. Customers must pay the fare difference if their new flight is more expensive. You have a year or more to reschedule, depending on when you bought the ticket (see site for details).

JetBlue Airways is suspending cancellation and change fees on new bookings made through Feb. 28, 2021. Fare differences may apply.

Southwest Airlines is allowing passengers who cancel (at least 10 minutes before departure) to rebook within the next year or, in some cases, later: The airline has extended the expiration date of some travel credits. You can rebook online by visiting southwest.com/rebook. Note that fare differences may apply.

Spirit Airlines is waiving change fees for customers who book by Sept. 30. Its site says, “If you cancel your flight, you will receive a full purchase price reservation credit instantly.”

United has eliminated change fees for tickets on domestic flights, as well as flights to Mexico and the Caribbean; it will be permanent for some classes of tickets, but fees will again be charged for changes to Basic Economy tickets bought on or after Jan. 1, 2021. Travelers who change tickets can apply the funds (now or later) to a flight of equal or lesser value — or pay the fare difference — for travel up to 12 months from the original ticket issue date. Travelers can also fly standby on an earlier same-day flight to their destination for no charge beginning Jan. 1, 2021.