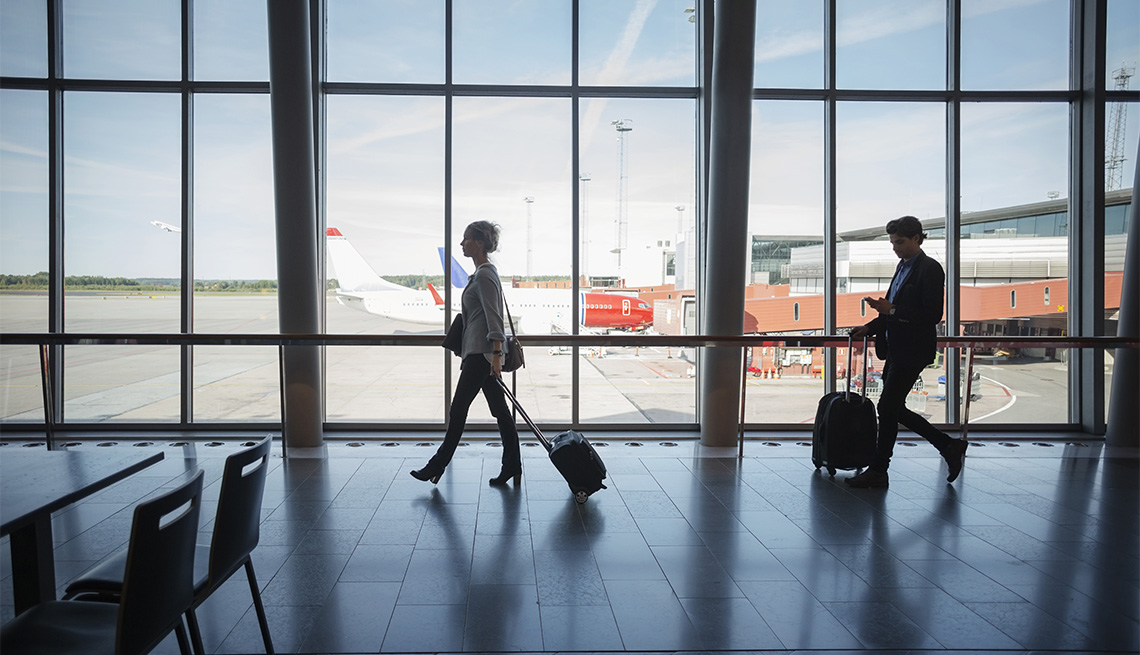 • The U.S. government has delayed the Oct. 1, 2020, deadline for Real ID, one of the accepted forms of identification travelers will need to use in place of a regular driver’s license to get through airport security under the federal Real ID law. The new deadline is Oct. 1, 2021.

• Health officials are advising against nonessential travel, especially for older adults and people with underlying medical conditions — those most at risk of complications from COVID-19.

• The U.S. State Department has asked all Americans currently abroad to return home immediately “unless they are prepared to remain abroad for an indefinite period.” Those returning from many countries (those with “widespread, ongoing transmission,” considered Level 3 by the State Department) are asked to self-quarantine for 14 days.

• The U.S. borders with Canada and Mexico are closed to nonessential travel; the restrictions don’t apply to cargo/trade.

• For the few who do travel, the Transportation Security Administration (TSA) is allowing passengers to board flights with driver’s licenses that expired beginning March 1, 2020, “to use it as acceptable ID at checkpoints for 1 year after expiration date, plus 60 days after the #COVID19 national emergency.”

Health experts are asking Americans to avoid all nonessential travel, and transportation systems are being disrupted nationwide during the coronavirus outbreak. Some people have essential travel, however, including Northerners heading home after winters in the South; people who need to help family members during the crisis; and Americans abroad who have been asked by the State Department to return immediately.

If you do have essential travel that requires you to fly during the outbreak, “there’s no way you can do it in a way that’s risk free,” says Robert Murphy, M.D., professor of infectious diseases at Northwestern University’s Feinberg School of Medicine. And you should also take precautions if a long road trip is necessary.

Here’s what to expect and how to at least lower your risk.

“Bring some alcohol wipes with you and wipe down anything you’re going to touch,” says Murphy.

Airports are ramping up their cleaning procedures, however. At Louis Armstrong New Orleans International Airport, “janitorial staff is conducting additional cleanings in frequently touched areas throughout the terminal, like hand rails, door handles and other hard surfaces,” says airport spokesperson Erin Burns. “Hand sanitizing stations are available in high-traffic areas throughout the terminal.”

Some food vendors are still open, Burns says; those that are “have restricted access to some tables and chairs to ensure adequate spacing between guests.” At Washington, D.C.-area airports Reagan National and Dulles International, most sit-down restaurants are closed to comply with Virginia Gov. Ralph Northam’s call for no more than 10 patrons at dining establishments; there are still carryout options available, according to Metropolitan Washington Airports Authority.

The major airlines report they are following Centers for Disease Control and Prevention guidelines for sanitizing public interfaces at the airport: cleaning with disinfectant all check-in kiosks, ticket counters, gate seating — among other frequently touched areas — multiple times a day, and providing hand sanitizers throughout ticket and boarding areas.

United says that it’s cleaning and sanitizing its wheelchairs: “wiping down all touch-points including push bar, brake handle, armrests, seat cushion and foot bar with wipes after every use,” and spraying a sanitizing disinfectant on all surfaces.

The TSA is asking travelers to use enhanced precautions during airport screening, including not using the security bins; putting personal items such as wallets, phones and keys into carry-on bags instead of plastic bins; and washing hands before and after going through screening.

It’s also allowing passengers to bring liquid hand sanitizer up to 12 oz. in carry-on bags; previously liquids could be in containers of no more than 3 oz.

If you have to fly, “Just do your business, get off and get out.”

“Wipe the area down where you’re going to be sitting and the armrests and the tray table — anything you touch,” says Murphy. “If there’s a touchscreen or control or something, you need to clean that before you touch it. Just do your business, get off and get out.”

He adds, “If anybody around you is sick. Get off the airplane — keeping in mind that about 7 percent of the people that are infected have no symptoms”

The airlines are doing what they can: All of the major U.S. airlines “are equipped with High Efficiency Particulate Air (HEPA) filters, which clean the air,” according to the industry advocacy organization Airlines for America, which details each airline’s cleaning protocols. It notes, for instance, that “Southwest aircraft receive more than six hours of cleaning every night.”

United says it’s using “an effective, high-grade disinfectant and multipurpose cleaner” on all touch points in cabins, and if it learns that a passenger or employee who’d flown on the plane is exhibiting symptoms of COVID-19, “that aircraft is taken out of service and sent through a full decontamination process that includes our standard cleaning procedures plus washing ceilings and overhead bins and scrubbing the interior.”

Delta reports that it’s doubled down on its regular cleaning program and added a fogging process to disinfect many international flights. Its site explains, “The fogging procedure uses a high-grade, EPA-registered disinfectant and virucide that is highly effective against many communicable diseases, including coronaviruses.”

Many tour operators, including Collette and Tauck, are suspending most trips scheduled in March or April; Road Scholar's canceling trips through the end of May. With health officials issuing strong warnings against cruise travel, the major U.S. cruise lines have also suspended operations through mid-May; some lines (Princess, for instance) are offering full refunds for cancelled voyages; others are giving prospective travelers credits for future cruises. Viking River Cruises is offering either a 125 percent credit for future cruises or money back.

Amtrak is allowing no-fee changes and cancellations as well for existing or new tickets bought before April 30. Its service has been reduced, with at least 40 percent fewer trips along its busy Northeast Corridor, between Boston and Washington, D.C. (See service updates on Amtrak’s site.)

Note that the major U.S. airlines are experiencing very high call volumes, so they recommend that customers make changes online. Here’s a rundown of their policies.

Alaska is allowing customers who bought or plan to buy nonrefundable tickets between Feb. 27 and March 31 for travel through Feb. 28, 2021, to cancel their trip and apply the funds toward a future flight. Customers who purchased a first class, main or award ticket also have the option to change their flights once without charge (fare differences still apply).

American Airlines won’t charge a penalty for changes to flights purchased before March 1 for travel originally scheduled through May 31. (Fare differences apply when rebooking; rescheduled flights must depart by Dec. 31.)

Delta is waiving change fees for all tickets purchased in March, as well as for all flights departing in March, April or May (fare differences apply). Fees are also waived for international tickets to affected countries. Rebooking details and restrictions may vary by destination; see Delta’s website for details.

JetBlue is suspending change and cancellation fees for customers traveling March 10 through April 30, as well as for new bookings made between March 6 and March 31 for travel through Sept. 8 (fare differences may apply). Flights originally booked on or before March 10 can be rescheduled for a new date, as late as Oct. 24. No-penalty changes and cancellations also apply to bookings made between Feb. 27 and March 5 for travel through June 1.

Southwest notes on its website that it “never charges customers a fee to change or cancel their flight,” as long as it’s at least 10 minutes before the flight’s departure. The money for the canceled flight can be applied to a future trip with Southwest for up to one year from the original purchase date. You can make changes online.

Spirit is allowing customers who “must alter their travel plans” due to COVID-19 to request a credit for the full value of their flight, which must be used within six months (including for flights beyond that timeframe). To make changes, visit Spirit’s online reservation credit form.

United: is waiving change fees for tickets to all cities purchased before March 2 for travel planned between March 9 and May 31; new bookings made between now and March 31 can be changed for free over the next 12 months. Fares differences may also be waived for specific international destinations; see the carrier’s website for details.