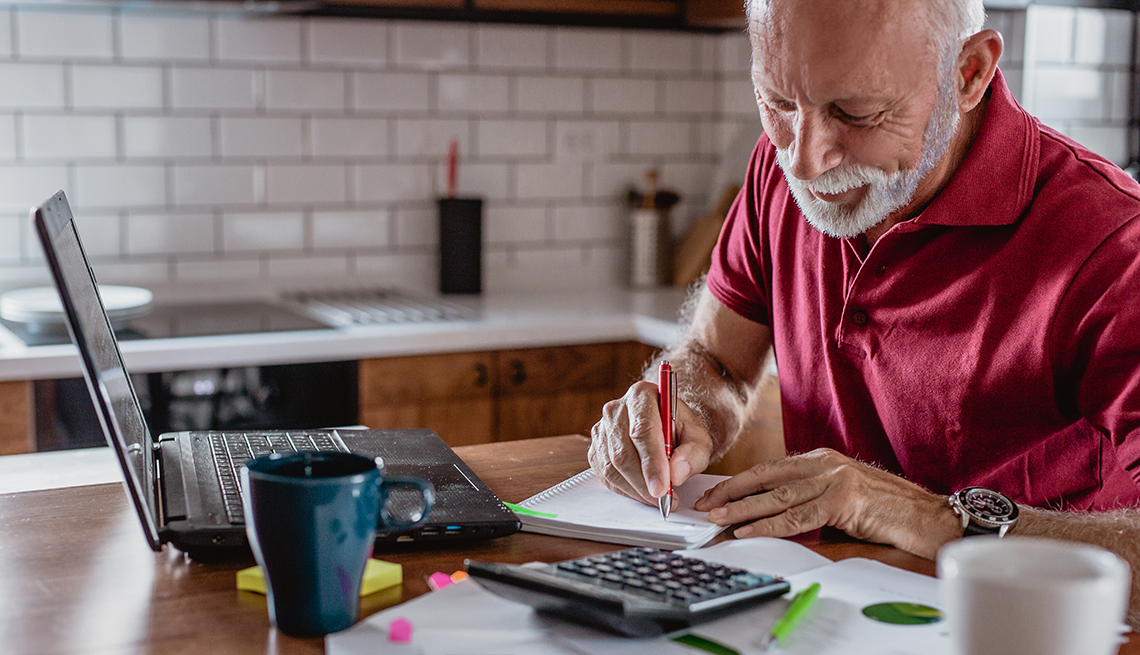 En español | Most people know the importance of scheduling an annual health exam.

But at the start of a new year it's a smart move to conduct a multipoint checkup of your personal finances. A lot can change in a year.

Investment portfolios can get riskier because of price moves in financial markets. Overspending can bust budgets. Estate plans can get upended after an unplanned death.

People living on fixed incomes also have less room. So taking a proactive approach to managing your financial health can boost your odds of staying on track — and help you avoid nasty surprises that could crack your nest egg.

Too often, only one member of a household knows how much money is coming in and how much is going out each month, what financial firm the 401(k) accounts are with, how big — or small — their balances are or which life insurance policies to tap if the chief financial officer (CFO) of the household dies unexpectedly.

That lack of financial transparency can cause problems, says Anthony Ogorek, founder and chief executive of Ogorek Wealth Management in Williamsville, New York.

"A married couple is viewed as an economic unit,” he says. “Oftentimes, the non-CFO spouse is left in the dark."

His advice: Make sure both partners are privy to all the household's financial information.

Few people want to talk about what happens when one spouse dies, but it's a lifesaver for the surviving spouse to have a blueprint of how to move forward financially.

"Make sure each spouse understands how things will play out in the event of a sudden death,” Ogorek says. “If you don't know what you have as a family unit or where it is or who [what certified public accountant or financial adviser] you're working with, and the rug gets pulled out from under you, it's a very traumatic experience."

Put everything in writing, what Sandra McPeak of Wells Fargo Advisors in Rolling Hills Estates, California, dubs the “family letter.”

‘You don’t want to leave a spouse or your kids with a bulging file cabinet or no information at all.’

Create a document that lists insurance policies; investment and savings accounts; the names of your accountant and estate lawyer; as well as any money you owe on auto loans, credit cards or mortgages. Include the name of the financial institutions, account numbers, balances, key contact information and online account passwords.

"Ideally, I want it to be one to two pages,” McPeak says. “The letter lets my spouse step into my shoes and run things smoothly.

"You don't want to leave a spouse or your kids with a bulging file cabinet or no information at all,” she says. “It should include basic things like, ‘Do we have a mortgage? And, if so, is it paid by autopay or check? Do we have insurance? Who are the beneficiaries? Do we have a [safe-deposit] box? If so, where is the key and what's in it?’ “

3. Do a balance sheet assessment

How healthy are your finances heading into 2020?

To find out, add up all your assets, such as retirement account balances, bonds, cash, certificates of deposit and home equity. Then subtract your liabilities, or money you owe on auto loans, credit cards and mortgages.

The more you have left over, the stronger your financial position.

"See what your net worth is now,” says Lewis Altfest, chief executive of Altfest Personal Wealth Management in New York City. Doing so will help you know where you stand in the eternal conflict between assets and spending.

The good news? With the broad U.S. stock market, as measured by the S&P 500, up around 24 percent in 2019, your net worth likely swelled in size if you owned domestic stocks.

Thus, Altfest says now might be the time to treat yourself to a one-time-only celebration, such as a vacation. But don't spend all your gains.

"There may be some difficulties around the corner,” he says.

The good news is that the stock rally in 2019 likely boosted your 401(k) and IRA balances.

The bad news is that the sizable gains might have left you sitting with too big a helping of stocks in your retirement portfolio.

‘Don’t succumb to temptation and say, “Hey, look how well I’m doing. Maybe I should put more in stocks.” That is the opposite of what you should be doing.’

A mix of 60 percent stocks and 40 percent bonds and cash at the start of 2019 might be closer to 70 percent equities and 30 percent fixed income now.

The bottom line? Your portfolio might be riskier now than your financial plan calls for. That could set you up for bigger losses if you don't get your asset mix back in balance and stocks decline in 2020, Altfest says.

"Retirees don't have any way to catch up income-wise, so they have to be a little more conservative,” Altfest says. “This is the time to bring their stock and bond allocation back in line."

Now's not the time to get greedy, he says.

"Do it now,” Altfest says. “Don't succumb to temptation and say, ‘Hey, look how well I'm doing. Maybe I should put more in stocks.’ That is the opposite of what you should be doing."

5. Size up your spending

Did you stick to your budget and protect your nest egg rather than squander it?

Analyze your spending for the past year to get the answer, Altfest says.

"Most people underestimate their spending,” he says.

A simple accounting trick to see how much cash you burned through is to look at your savings account balance at the end of last year and compare it to now, Altfest says. To get an even clearer picture of your total annual spending, include your income from Social Security and pensions, and add that to the amount of savings you've spent.

"Getting that spending figure could be a wake-up call,” Altfest says. If you spend more than 4 percent of your total nest egg in any given year, which is a general rule of thumb when it comes to drawing down retirement savings, you'll need to adjust your spending in a more systematic way, he says.

It might make sense to cut back on big expenditures or cut back on more frequent spending habits.

"If you like to eat at your favorite French restaurant, eat out once a week rather than twice a week,” Altfest says.

One last thing: Now's the time to sit down with your adult kids and fill them in on your financial condition, McPeak says.

Let them know how you would like to handle end-of-life issues, such as health care proxies, long-term care and whether you think your home is safe enough to live in as you age. Don't forget to communicate clearly about the contents of your will, who gets what and why, to avoid family rifts later, she says.