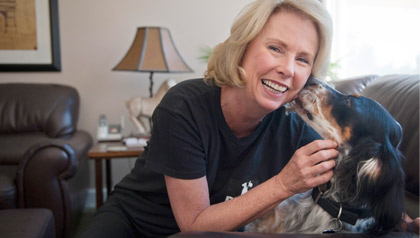 At home with her companion Kaiya, Genevieve Frederick is the founder of a nonproft that feeds and cares for pets of the homeless.

En español | When Genevieve Frederick visited New York City in 2006, she saw a homeless man on the sidewalk, begging. Lying next to him was a dog. Frederick wondered why a guy who can barely feed himself would have a pet.

"Then the answer became obvious," she recalls. "Pets are loyal, nonjudgmental companions that provide comfort and even protection and warmth. They may be a homeless person's only companion."

From that seemingly insignificant incident, Frederick, now 64, embarked on a mission that resulted in the founding of Pets of the Homeless, an organization that provides food and veterinary care for pets of homeless people throughout the United States and parts of Canada.

Returning home to Carson City, Nev., after that New York trip, Frederick began researching the plight of homeless people and their pets. What she found was mind-boggling: About 5 to 10 percent of the nation's estimated 3.5 million homeless people have at least one pet. In some areas, the figure is as high as 24 percent. Because few shelters allow animals, most pet-owning homeless individuals choose to stay with their four-legged friends. They sleep outdoors or in cars and tent camps.

Determined to help, Frederick launched Pets of the Homeless in 2007. She started by asking her dog's veterinarians, Gary Ailes and Woody Allen, to collect pet food donations. The local media picked up the story, and on the first day of collection, the donations filled a 55-gallon trash can.

Since then, other businesses have joined the effort, and drives have spurred contributions. At last count, more than 79 tons of pet food have been donated. In August, the organization sponsored its latest drive — the second national Give a Dog a Bone week, which encouraged people to bring pet food donations to a site near them.

Next: Number of homeless people with pets continues to grow. >>

Volunteers bring the food from the collection sites to be distributed at food banks, soup kitchens and homeless shelters. Sometimes, they take the food directly to the streets where they have seen homeless people with pets.

Cash donations, as well as pet food, have been pouring in, despite the hard economic times. The organization uses the funds to award grants to veterinarians who hold free clinics in areas where homeless people congregate.

In addition to helping pets of chronically homeless people, Pets for the Homeless also steps in when natural disasters strike. Donations also pay for animals' sleeping crates, which some shelters are beginning to allow in areas prone to natural disasters. Since Hurricane Katrina, agencies realize that people don't want to leave their pets behind when disaster strikes.

The number of homeless people with pets continues to grow because of the troubled economy. According to the Bureau of Labor Statistics, 14.1 million Americans are unemployed, and loss of jobs often results in loss of homes. While many homeless individuals live in shelters, nearly four out of 10 live on the street or some other unsuitable place.

Frederick, who has an English setter named Kaiya, understands fully the bond between pets and their owners. To fulfill her mission of helping less fortunate pet owners, she has recruited her family. Her husband, Ray, delivers pet food, and her daughter, Renee Lowry, is an officer at Pets of the Homeless. Her three grandchildren, ages 5, 8 and 11, put labels on plastic bags for pet food and mailing labels on envelopes.

"Knowing that pets have a chance to get nutritious food and vet care makes all the years that I've devoted to the program worthwhile," says Frederick. "Pets of the homeless don't choose their owners. But that doesn't matter, as long as they receive attention and love."

Also of interest: Are you overfeeding your pet?  >>

Eleanor Gilman is a writer in New Jersey.