En español | Three Rivers, Texas, 1949. Beatrice Longoria wants to bury the remains of her husband, Felix, a soldier killed in the Philippines during World War II. But the owner of the only funeral parlor in town won’t allow the family to use the chapel because, he says, “the whites wouldn't like it.” So Longoria contacts Dr. Héctor García, a local civil rights activist, who fires off telegrams to elected officials demanding justice. The only response comes from freshman U.S. Senator Lyndon Baines Johnson, who arranges for Longoria to be buried with full military honors at Arlington National Cemetery.

So begins The Longoria Affair, a documentary airing November 9 on PBS as part of the Independent Lens series. Director John J. Valadez’s film packs interviews, archival news footage and present-day shots of the Texas town into an efficient, well-balanced 52 minutes. What could have almost been dismissed as an obscure case of past injustice is revealed to have present-day implications when Santiago Hernandez, a musician and activist, tries to honor Felix Longoria by naming a local post office after him and finds the present-day Three Rivers community divided over his legacy. 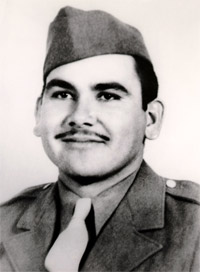 Fortunately, the film ends with a touching scene honoring Longoria and the community coming together. A sign, surely, that progress is built on the past.

And that’s wisely where the film spends most of its mileage, using the long-term relationship between García and Johnson as a sharp lens to examine the role the Longoria incident played in jump-starting the movement for Mexican American civil rights.

“García had been challenging racism for years, and mostly he was ignored,” says Valadez of the civil rights advocate who, during the war, commanded a field hospital near the front lines. “But the thing that was unique about the Longoria incident was that it was a soldier who had fought and died for his country.”

Actor Tony Plana, who narrates the documentary, explains: “I think it was deeply affecting and highly controversial and emotional to have a GI hero come back and be denied access to a funeral parlor, after he gave his life for his country. It was too boldfaced, too insulting and damaging for [García] not to act on it.”

True enough, but it is the García-Johnson relationship that is at the heart of the film. When he first got out of college, Johnson was a principal at a segregated and poor Mexican American school in Cotulla, Texas, and he had never forgotten the squalor and racism he had witnessed. The documentary illustrates Johnson’s long-standing affection for the Latino community — for instance, he spent much of his first month’s principal salary to buy sports equipment for the children — but also explains how he couldn’t be too conspicuous in working on the behalf of Latinos out of fear of losing the votes of white Texans.

“[Johnson] came from an area and a people that were poor, and he was among them, he was one of them,” says Vicente Ximenes, a friend and collaborator of García, who was eventually named by then-President Johnson as chairman of the Cabinet Committee on Mexican American Affairs. “He was always able to get 90 percent of the Mexican American vote ... but he never voted for civil rights as a congressman and as a senator. If he had, the racist constituency he had would have voted him out of office.”

That’s where García came in. The doctor founded the American G.I. Forum, a civil rights group composed of Mexican American and white non-Hispanic veterans, and used its growing membership to try and influence political issues, including Johnson’s social policies. The relationship between the doctor and ambitious politician was long-lasting and sometimes contentious. Still, says García’s daughter Wanda García, “I believe they respected each other. Johnson had a very strong knowledge of how Mexican Americans and minorities were treated.”

“García would constantly challenge Johnson as few people would,” adds Valadez, “and I think Johnson loved that in a way. He loved a good fight and strong personalities."

Thanks in part to García’s influence, Johnson eventually brought more Mexican Americans into the federal government than any other president in history. He also signed into law two landmark acts — the Civil Rights Act of 1964 and the Voting Rights Act of 1965 — and in his speech before Congress introducing the Civil Rights Act, Johnson specifically mentioned his experience teaching in the segregated Mexican American school, where he saw children often come to school without having eaten breakfast.

“Johnson gave a lot of good speeches, but very rarely did he inject a personal anecdote about his own life,” says Valadez. “This is one of the very few times he reveals something personal about himself.”

Ultimately, The Longoria Affair peeks into a hidden history that is just starting to emerge. Before César Chávez and the United Farm Workers became its standard bearers, the movement for Mexican American civil rights was spearheaded by Dr. Héctor García and his efforts.

“History has tended to discount Mexican Americans’ achievements,” says Wanda García. “Mexican Americans were not aware of their history because this information was omitted from history textbooks. We were made to feel inferior, and I think that’s why no one spoke out. But now things are changing, and we are fighting to get our history into the schoolbooks.”

Independent Lens offers The Longoria Affair free online in English November 10 – 16. The Spanish version of the film will be available November 11 – January 10, 2011.