See also: Sign up for the AARP Travel Newsletter

Nina Janet Seung worked for the U.S. State Department as a Foreign Service specialist for 17 years, retiring in 1997. She had continued to work for the State Department for the next decade as a retiree, accepting assignments to work in various posts throughout the world for a few months at a time, when she decided to take her dream vacation in 2007. 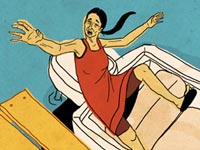 Does an injured passenger on an international cruise need to travel to Paris to sue the cruise line?

Seung took off from Los Angeles for Papeete, the Tahitian capital, where the staff for Regent cruises met her and took her to the Paul Gauguin. From there, they would sail the islands of French Polynesia.

On her first day on board the Paul Gauguin, before leaving port, Seung went ashore in Papeete. She got on a tender, a small boat that takes passengers to and from the larger ship.

When she returned to the tender that day, Seung discovered there were no handrails to help her get in safely. Crew members were standing nearby, but no one helped her board. The tender was rocking in the water, and, as she tried to step in, she fell, badly breaking her hip and causing her terrible pain.

Not wanting to risk surgery in a foreign country, she booked a plane ride home. Because of her pain, she had to buy a business class ticket, which put her in debt. Her injury required multiple surgeries and years of rehabilitation.

A lawsuit without a home

In 2008, Seung sued Regent for negligence, arguing that it had not shown the proper care in helping her get into the tender boat. Although she lived in California, she brought the suit in Florida, where Regent has its corporate headquarters.

But Seung got a rude surprise. She had signed a contract with Regent, and in the fine print there was a "forum selection clause." That clause said that if Seung wanted to sue Regent, the suit could only be brought in Paris, France. Seung argued that a forum clause that required her to travel to another country was unreasonable, and a way for Regent to discourage lawsuits. She said it was unfair to make her bring a suit in a place where she doesn't speak the language, and where she would have to spend nearly $15,000, including travel expenses. French attorneys do not work on contingency fees.

Besides, Seung argued, because of the injury she suffered through Regent's negligence, she was too injured to travel. Even if she could travel, she couldn't risk making her injury worse in Paris, where she wouldn't be able to speak to the doctors. Because Regent is a U.S. company, Seung is a U.S. citizen and she started her cruise trip with a flight from the United States, Seung told the court, Regent should not be allowed to evade its responsibility by forcing her to sue overseas.

Next: What was the verdict in Seung's case? >> 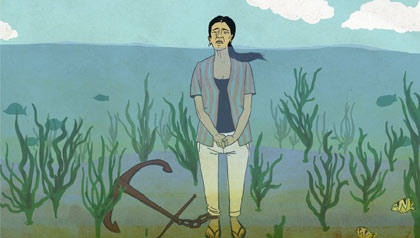 "The cruise lines bury language in the fine print of the ticket contract, which significantly impacts your rights," says the plaintiff's attorney.

Regent argued that, although it has headquarters in the United States, the ship Seung chose to take did not leave from or even enter a U.S. port. Seung boarded in Tahiti and was scheduled to travel in French Polynesia. Since the ship had no contact with the United States, Regent was not required to provide a U.S. legal forum. Seung was free to file a suit in Paris, where she would have all the legal rights provided by France.

The U.S. Court of Appeals for the 11th Circuit sympathized with Seung's situation. It noted in its 2010 decision, however, that it takes a "strong showing" to prove that a forum selection clause should not be enforced.

Seung signed the Regent contract, which contained the clear language that "for all cruises which do not include a port of the United States, it is agreed … that any and all disputes … shall be litigated and determined in Paris, France." Since Seung's cruise did not touch a U.S. port, she had a heavy burden in proving that the forum clause was unreasonable.

The court noted that Seung did not argue that Regent committed fraud, or that she would be denied a remedy if she brought her suit in Paris. In fact, the court reasoned, by agreeing to a forum selection clause, Seung allowed Regent to limit the legal expenses that might be incurred by forum shopping. This savings by Regent may have helped reduce the cost of Seung's charges for the cruise.

The court was not persuaded by Seung's argument that she could not travel. The court reasoned that a trip from California to Florida would be nearly as difficult, and cause similar health risks and concerns, as traveling to Paris.

Paris, the court found, was a reasonable neutral location for Regent to require passengers from many different countries to bring lawsuits.

Seung's attorney, Michael Winkleman, says, "The cruise lines bury language in the fine print of the ticket contract, which significantly impacts your rights" — a lesson Seung learned too late.