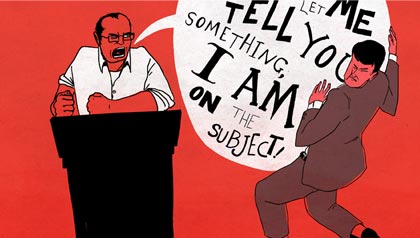 When he arrived at the meeting, Jones signed up to speak on city-sponsored senior citizen discounts for garbage removal. Mayor Richard Heyman started the session at 8 p.m., televising live to the city and surrounding county. Two-and-a-half hours went by before Jones was recognized to speak. As the cameras rolled, Jones stepped to the podium and began criticizing the commission's spending. Mayor Heyman quickly cautioned Jones to stay on the topic of garbage removal.

Jones raised his voice and said, "Let me tell you something, Mister, I am on the subject. If you can't stay germane in your mind, that's your problem, not mine."

The mayor threatened to have Jones removed from the meeting if he didn't calm down. When Jones replied, "I don't think you're big enough," the mayor ordered police to take Jones out of the room.

Two city police officers took Jones to another room and handcuffed him to the wall. After the mayor told police that he didn't want Jones arrested, Jones was released.

The police cautioned Jones to stay out of the meeting, which was still going on, but as soon as the cuffs came off, Jones went straight into the hearing room. The police grabbed him again, put on the cuffs and brought Jones back into the holding room. He was charged under a local ordinance, that said it is unlawful for anyone "to disturb or interrupt any meeting of the City Commission."

Television viewers throughout the area watched and listened to the incident between Jones and the mayor. The local newspaper and radio stations reported on Jones' arrest, and the television station replayed Jones' exchange with the mayor and his arrest.

Jones sued the mayor and the city claiming that his First and 14th Amendment rights were violated by his removal from the meeting. He argued that the city ordinance that allowed for his removal should be invalidated by the court as vague and overbroad. At the trial, Jones testified that the incident and the publicity it generated had harmed his business and embarrassed his family.

The city and the mayor replied that the ordinance was constitutional and Jones' behavior warranted removal under its terms. The mayor believed that Jones might get more disruptive, or even violent. Stopping Jones from hijacking the meeting by his behavior, the mayor argued, did not violate Jones' First Amendment right to express himself.

Were Jones' rights violated? Or was his behavior just plain bad?

How would you decide? (Read the verdict.) 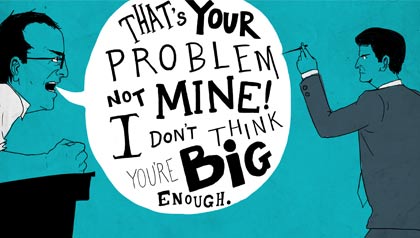 The U.S. District Court for the Southern District of Florida ruled in Jones' favor, finding that his First Amendment rights had been violated because he had not been allowed to express himself. He was awarded $31,500 from the city, and the same amount in punitive damages from the mayor.

But in 1989 the 11th Circuit Court of Appeals disagreed. The court reasoned that the government can regulate expressive conduct as long as that interference is justified without regard to content. "We feel that the mayor certainly had an important interest in confining Jones to the topic at hand and in preventing disruption of the meeting."

If the mayor could not "regulate irrelevant debate and disruptive behavior at a public meeting," the court held, those meetings would "drag on interminably, and deny others the opportunity to voice their opinions." Since the court found that the mayor acted reasonably in regulating the time, place and manner of Jones' speech, the ruling in favor of Jones was overturned.