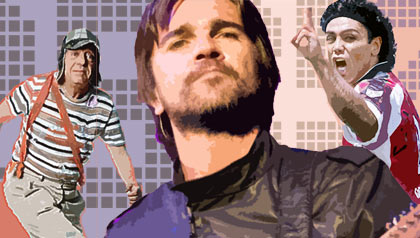 En español | Latin America’s biggest rock star. A comedian loved by generations. A soccer legend who tallied more than 400 goals over his career. The Hispanic Heritage Awards celebrated their 25th anniversary September 15 by honoring Latino luminaries at the John F. Kennedy Center for the Performing Arts in Washington, D.C.

My legacy [to you] is what I’ve always done: entertain in a wholesome way. I want people to accept laughter’s value. Laughter is how human beings express their success. People laugh because they understand. [Laughter] is indispensable; it’s a necessity. <br>— <i>Chespirito</i>

Next: Bringing Latino leaders together. >>

“It’s a thrill,” said Andrade. “I’ve been blessed, because I’ve always seen my work not as a job, but as a mission. It's my purpose in life. Any time you’re honored at this level, especially on this special anniversary, you can’t help but feel humbled.”

The Hispanic Heritage Foundation, which runs the awards program, has grown in prestige since its modest start. In 1998 the foundation also launched a year-round youth leadership program aimed at cultivating future award honorees.

"The annual awards ceremony always brings together Latino leaders in celebration of the culture, achievement and great promise of Hispanics in America and globally," said Hispanic Heritage Foundation President and Executive Director Jose Antonio Tijerino. “Everyone — from celebrities to educators to innovators to community and business leaders — brings something special to the room: what country they’re from, what barrio they’re from, what industry they work in. Everyone brings a unique perspective that makes up the great fabric that is Latinos in America. That's the beauty of the Hispanic Heritage Awards.”

You may also like: 10 milestones in the immigration of Latin Americans.