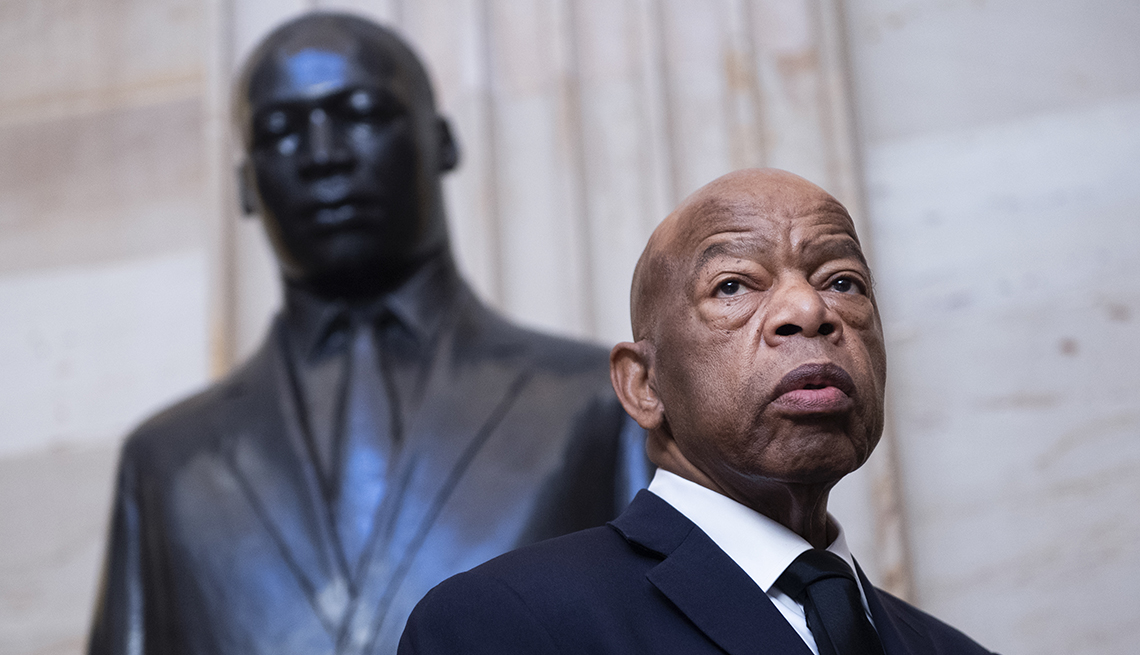 John Lewis is seen near the statue of Dr. Martin Luther King, Jr., in the Capitol Rotunda.

Civil rights icon John R. Lewis, the last surviving speaker of the 1963 March on Washington, died July 17, less than seven months after announcing that he had been diagnosed with advanced pancreatic cancer.

The Atlanta resident, 80, was a veteran not only of 33 years in Congress but also of the March 7, 1965, Bloody Sunday march across the Edmund Pettus Bridge in Selma, Alabama. At age 25, walking at the head of the march with his hands tucked in the pockets of his tan overcoat, he was knocked to the ground and beaten by white police officers. His skull was fractured, and nationally televised images of the brutality focused the country's attention on racial oppression in the South.

"Congressman John Lewis was a true example of leadership,” said Jo Ann Jenkins, AARP's chief executive officer. “He dedicated his life to equal justice for all Americans, bringing moral clarity to our national dialogue and inspiring individuals no matter what race, or party, or age or religion. Rep. Lewis was an icon for generations of Americans, from his march in Selma that led to the Voting Rights Act, to his work to end discrimination against LGBTQ Americans."

Youngest of the ‘Big Six'

Lewis was the youngest of the Big Six civil rights activists, a group led by the Rev. Martin Luther King Jr. that had the greatest effect on the civil rights movement. Lewis’ beating led President Lyndon Johnson to press Congress to pass the Voting Rights Act. The bill became law later in 1965, removing barriers that had barred blacks from voting.

"He loved this country so much that he risked his life and his blood so that it might live up to its promise,” President Barack Obama said in a statement after Lewis’ death. “And through the decades, he not only gave all of himself to the cause of freedom and justice but inspired generations that followed to try to live up to his example."

Lewis spent the final months of his life witnessing, if from the sidelines, seismic changes within American society. He viewed the recent protests for racial justice as a continuation of his life's work and expressed pride in demonstrators carrying on his legacy of what he long referred to as “good trouble."

Among the original Freedom Riders

Lewis was born Feb. 21, 1940, near Troy, Alabama, and attended segregated schools. He graduated from American Baptist Theological Seminary in Nashville, Tennessee, and also earned a bachelor's degree in religion and philosophy from Fisk University in Nashville.

He was one of the original 13 Freedom Riders, six black and seven white activists who rode buses starting in 1961 into the segregated South to call attention to states’ disregard for U.S. Supreme Court decisions on public bus desegregation. That same year, at age 21, he suffered his first attack: He was punched in the face and kicked in the ribs for his activism when he tried to enter a whites-only bus waiting room in Rock Hill, South Carolina.

“Early on, he embraced the principles of nonviolent resistance and civil disobedience as the means to bring about real change in this country, understanding that such tactics had the power not only to change laws, but to change hearts and minds as well.”

"I hold no grudge,” Lewis said in 2009. “Hate is too heavy a burden to bear. … Dr. King taught us to love and forgive, and a lot of people are proud of you. You are leading the way for a lot of people."

Before Lewis’ election as chairman of the Student Nonviolent Coordinating Committee in 1963, he had been arrested two dozen times for his nonviolent protests as part of the civil rights movement. That included incarceration for 37 days in the Mississippi State Penitentiary — for entering a whites-only area of a bus station in that state.

"Early on, he embraced the principles of nonviolent resistance and civil disobedience as the means to bring about real change in this country, understanding that such tactics had the power not only to change laws, but to change hearts and minds as well,” Obama said.

Lewis's family members created a six-day celebration of life from July 25 through 30, in Troy, Selma and Montgomery, Alabama; Washington, D.C.; and Atlanta, where Lewis was buried in a private service at South-View Cemetery. Not all events were open to the public, but the public was able to pay respects at each stop.

Events included a procession across the Edmund Pettus Bridge on July 26 and a ceremony the next day at the U.S. Capitol, where Lewis lay in state through July 27. Like Sen. John McCain (R-Ariz.), President George H.W. Bush and civil rights pioneer Rosa Parks, Lewis was honored in the Capitol Rotunda where the nation's most revered figures have lain. In October 2019, Rep. Elijah Cummings (D-Md.) became the first black lawmaker to lie in state in the Capitol but was honored in Statuary Hall. 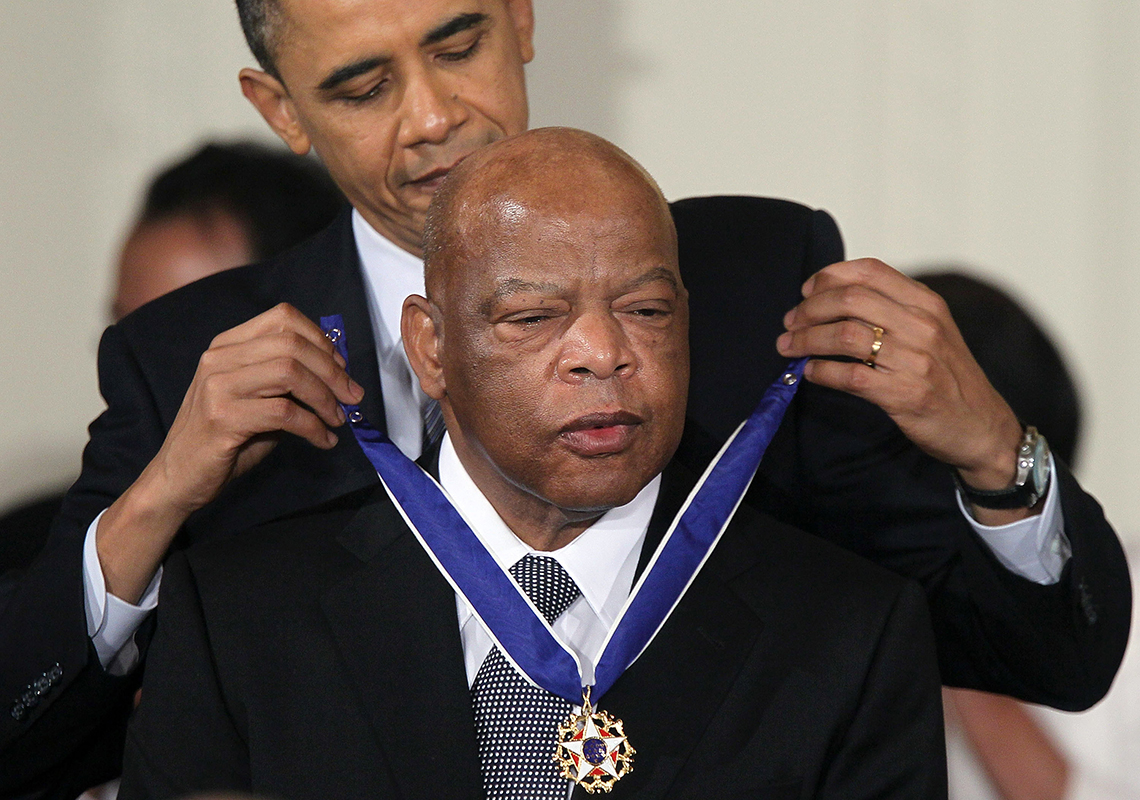 John Lewis is presented with the Presidential Medal of Freedom by President Barack Obama.

In 2011, Obama honored Lewis with the Presidential Medal of Freedom, and the president and congressman marched hand in hand in Selma on the 50th anniversary of the Bloody Sunday attack.

Lewis worked for 15 years to gain approval for the Smithsonian National Museum of African American History and Culture. Humble and unfailingly friendly, Lewis was revered on Capitol Hill. But as one of the most liberal members of Congress, he often lost policy battles, from his effort to stop the Iraq War to his defense of young immigrants. Many elected officials dubbed him the “conscience of Congress."

Lewis first ran for Congress in 1977 when Rep. Andrew Young resigned to become President Jimmy Carter's ambassador to the United Nations, but he lost the runoff election. Lewis first held public office in 1981 as an at-large member of the Atlanta City Council.

In 1986, the Democrat was elected to the 5th District U.S. House seat and won 16 additional times. Throughout his years in Congress, he was known as a staunch advocate for equality and peace.

"Congressman Lewis represented Georgia's 5th Congressional District, but his real constituency spanned the country as the voice for millions of disenfranchised Americans,” Jenkins said. “His legacy will live on as our nation continues to work together to advance racial justice, healing and new progress toward full equality."

This article has been updated to include information about the memorial services for John Lewis.

— The Associated Press contributed to this story