WASHINGTON (AP) — For the first time, Americans 45 and older make up a majority of the voting-age population, giving older Americans wider influence in elections as the U.S. stands divided over curtailing Medicare and other benefits for seniors.

Along with the information about the growing influence of older adults, preliminary census estimates also show a decline in the number of married couples with children, slight growth in household size and a rapid rise in the number of Mexicans.

The findings, based on the latest publicly available government data, offer a preview of trends that will be detailed in the next round of 2010 census results being released this month that focus on age, household relationships and racial subgroups.

As a whole, the numbers point to a rapidly graying nation driven largely by the nation's 78 million baby boomers, who are now between the ages of 46 and 65 and looking ahead to retirement. 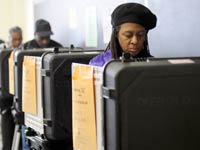 "The center of American politics gets older," said E. Mark Braden, a former chief counsel to the Republican National Committee who now advises elected officials and state legislatures. "Given the current fiscal concerns, it's going to be a test case whether Republicans or Democrats can talk about entitlement reform without getting killed" politically.

Currently, there are roughly 119 million people 45 and older who make up 51 percent of the voting-age population, with Americans 55 and older representing a large bulk of that group. The new majority share is up from 46 percent in 2000 and 42 percent in 1990.

The preliminary figures are based on the Census Bureau's 2009 population estimates as well as the 2009 American Community Survey, which samples 3 million U.S. households. The 2010 census surveyed the entire nation.

Broken down by subgroups, older boomers ages 55-64 were the fastest-growing group since 2000, jumping 43 percent to approximately 35 million. They were followed by seniors 85 and older, who increased 33 percent to more than 5.5 million, due largely to medical advances that have increased life spans.

The number of people ages 45-54 also rose sharply, up 18 percent to 45 million as young boomers moved into the ranks.

Based on actual election turnout, which is higher for older Americans, census data show that baby boomers and seniors ages 45 and older represent about 60 percent of voters in national races, judging by the 2008 presidential race. Nearly 1 out of 2 voters is 50 or older.

"Boomers have now crossed the line between thinking about Medicare and Social Security as an issue for their parents, to being worried about it for themselves," said William H. Frey, a demographer at Brookings Institution who did a broad analysis of available census data. "More so than their parents, boomers face increasing costs of medical care and the risk that government pensions will need to substitute for downturns in their 401k plans.

"Their interest in the viability of Medicare should be priority one for politicians seeking office, especially in aging regions of the country," he said.

The census numbers come amid spirited debate over federal spending cuts in the wake of ballooning government debt. The Republican-controlled House last month approved a plan that would replace Medicare with a government payment individuals would use to buy private insurance. The measure would affect only those younger than 55; people that age or higher would continue to be covered by the current Medicare system. For the younger group, health care would ultimately cost them more.

The GOP plan is partly a bet that the key voting bloc of older Americans will accept Medicare changes if they are not affected. So far, however, the heaviest resistance has come from older people who are opposed to cuts that will affect their children and grandchildren or that conceivably could be expanded later to include them. Americans 55 and older now represent about 32 percent of the voting-age population.

Senate Majority Leader Harry Reid, D-Nev., has indicated he will hold a vote on the House proposal, challenging Senate Republicans to take a position that could alienate older voters. In Maine, which has the nation's highest median age at 42, Republican Sen. Susan Collins already has come out against the GOP plan, and Republican Sen. Olympia Snowe has voiced doubts, specifically citing the potential impact on the state's aging residents.

More than half the states — about 28 — saw population declines over the last decade in the under-45 age group. Those states are mostly in the Northeast and Midwest and include Massachusetts, Michigan, Maine, Ohio, New York and Pennsylvania.

At the same time, 12 states primarily in the fast-growing South and West — including Arizona, Utah, Nevada, Georgia, Texas and North Carolina — had increases of at least one-third in their 45-64 age group, which include mostly baby boomers. Those states' median ages were somewhat lower due to immigration of Hispanics, who are more likely to raise families, and movement of young adults into their states.

David Certner, legislative policy director for AARP, a group representing Americans 50 and older, mentioned the increasing focus on older voters as public debate shifts more to entitlement reform. When it comes to Medicare and Social Security, older Americans have stronger feelings about keeping programs fully intact than 30-year-olds who aren't thinking about retirement or who aren't very familiar with the programs, he said.

Certner also cited the fast growth of the 85-plus population, evident in states such as Florida, Iowa and Pennsylvania, which he said puts additional financial pressure on baby boomers to support elderly parents as well as children. A recent Associated Press-LifeGoesStrong.com poll found that 44 percent of boomers had little or no faith they'll have enough money for retirement.

The decreases in traditional families were seen in 42 states plus the District of Columbia, while the remaining eight — Nevada, Utah, Idaho, Arizona, Colorado, Texas, North Carolina and Georgia — saw increases. Those eight states generally have a higher number of either immigrants or Mormon residents.

In contrast, non-family households made up of single people such as seniors living alone, or opposite-sex or same-sex partners without children, jumped 13 percent to roughly 38 million. Married couples with no kids, which include younger couples and older empty-nesters, rose 9 percent to more than 32 million.

"In American politics, there's a nostalgia element when invoking terms such as 'family values.' But that term is out of touch with the way many Americans live, given demographic changes such as gay marriage" and cohabitation, said Julian E. Zelizer, a professor of history and public affairs at Princeton University.

Official 2010 data on unmarried partner households will be released beginning in June, followed by figures on same-sex spouses in November.

—Married couples with children dropped since 2000 to an all-time low of roughly 1 in 5 households, surpassed by empty-nesters, childless couples, singles and unmarried partners.

—After a decades-long decline, average household size ticked higher to 2.63 from 2.59 in 2000. That's due mostly to the growth of the Hispanic population, which tends to have larger families, as well as some recent "doubling up" of adult children moving back in with parents during the recession.

—Mexicans increased by roughly 50 percent over the last decade to roughly 32 million and now make up close to 66 percent of all Hispanics. They were followed by Puerto Ricans, at more than 4.4 million or 9 percent share; Cubans at 1.7 million or 3.5 percent share; and other Hispanics, at 10.5 million or 22 percent.

—Utah had the youngest population with a median age of 29.

—Chinese are the most common Asians in the U.S., at 3.2 million, or roughly 23 percent share. But people from India are the fastest-growing, at 2.6 million or nearly a 20 percent share. Indians now hold the biggest Asian share in about 23 states compared to 12 states for Chinese. They are followed in numbers by Filipinos, Vietnamese, Koreans and Japanese.