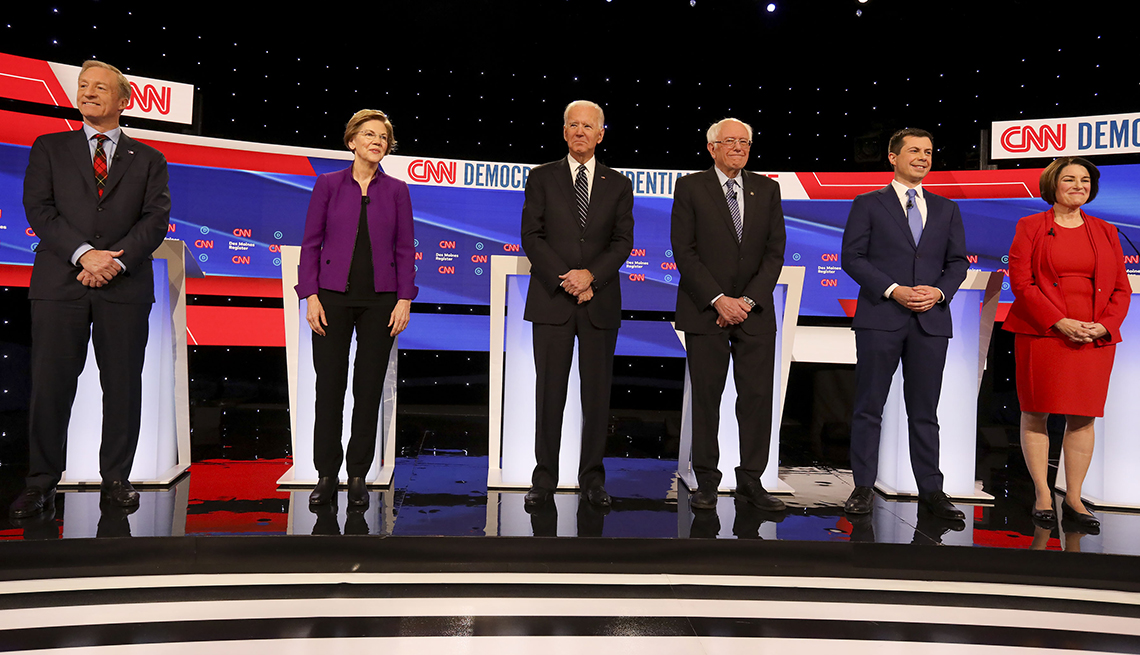 En español | Limiting how much drugmakers can raise prices, allowing Medicare to negotiate with pharmaceutical companies and even empowering the government to contract for the manufacture of lower-priced medicines were some of the ideas Democratic presidential hopefuls suggested Tuesday night in the last debate before Iowans caucus on Feb. 3.

Six of the Democrats seeking their party's nomination to challenge President Trump in November squared off at Drake University in Des Moines, 20 days before Iowans will continue the tradition of being the first voters in the nation to state their preferences for a presidential nominee.

Sen. Elizabeth Warren of Massachusetts said that on her first day in office she would lower the price of such lifesaving medicines as insulin, EpiPens and drugs to treat HIV-AIDS. She also said she would support having the federal government go into the drug manufacturing business.

Minnesota Sen. Amy Klobuchar said that though she is open to looking at government directly competing with drugmakers, the first things she would do as president to bring pharmaceutical prices down would be to have Medicare negotiate prices and to “start bringing in less expensive drugs from other countries. The issue here is that there are two pharma lobbyists for every member of Congress,” Klobuchar said. “They think they own Washington. They don't own me."

Late last year the House of Representatives passed a prescription drug bill that would direct Medicare to negotiate drug prices. Several states have also passed laws to ask the federal government to allow the importation of medicines from Canada and other countries, and the Trump administration has proposed a plan to allow that practice to start.

Former Vice President Joe Biden said his plan would allow Medicare to negotiate prices with drug companies and would not let manufacturers raise the price of a drug beyond the rate of medical inflation. “I would argue that the way you control drug prices is you limit what they can charge for those prices,” Biden said.

Pete Buttigieg, the former mayor of South Bend, Indiana, said he would put a $250 out-of-pocket cap on what Americans would have to pay each month for health care, including prescription drugs.

The six Democratic hopefuls divided into two camps on how they would provide greater access to affordable health care.

Warren and Sanders maintained their support for a “Medicare for All” single-payer system. To pay for his system, Sanders said he would levy a 4 percent tax on income over $29,000 a year. “So, the average family in America that today makes $60,000 would pay $1,200 a year” for health care, compared with the $12,000 a year that family pays now, Sanders said. “We take on the greed and the profiteering and the administrative nightmare that currently exists in our dysfunctional system.”

But Biden, Klobuchar, Buttigieg and businessman Tom Steyer said they want to build on the Affordable Care Act (ACA) by adding a public option to that law.

Buttigieg defended his proposal to automatically enroll uninsured Americans in the public option he would add to the ACA, essentially resurrecting the requirement that everyone carry insurance. The individual mandate, he said, “was an important part of the ACA because the system doesn't work if there are free riders. What I'm offering is a choice. You don't have to be in my plan if there's another plan that you would rather keep,” the mayor added. “And there's no need to kick Americans off the plans that they want in order to deliver health care for all.”

Biden also said that under his plan the 150 million or so Americans who like the health plan they have with their employers could keep it. “If they don't like it, or the employer gets rid of it, they can buy into a Medicare plan,” he said.