En español | Looks like people can still get paid even after they go to their final resting place.

From fiscal year 2006 through 2010, the U.S. Office of Personnel Management (OPM) shelled out more than $601 million to deceased individuals, according to a recently released agency report (PDF). 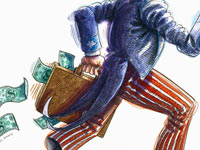 The post-death benefits payments came from the Civil Service Retirement and Disability Fund (CSRDF), which averaged $120 million annually over the five-year period and increased by 70 percent over that time frame, according to the agency's Office of the Inspector General. The money was doled out despite the fact that OPM generated recommendations in 2005 and 2008 to address the problem.

"In an organization that is not the federal government, this would not be allowed to happen," says Tom Schatz, president of the nonprofit, nonpartisan Citizens Against Government Waste. "People would get fired, or the company would go broke."

In the latest OPM report, released in September, Inspector General Patrick E. McFarland notes that "it is time to stop, once and for all, this waste of taxpayer money." The report cites a son of an annuitant who continued to receive improper payments for 37 years after his father died. The post-death payments totaled more than $515,000 and came to OPM's attention only after the son's own death in 2008.

"There remains a high probability that egregious loss of monies from the CSRDF will continue and require strategic corrective actions," McFarland says in the report.

Leading OPM's efforts to overhaul how retiree benefits are paid is Chuck Grimes, the agency's chief operating officer. "It's always a problem when we're paying out on information that we have [indicating] that people are alive," Grimes says. "When a federal employee dies, or a survivor dies or an annuitant dies, citizens need to let us know."

The majority of the improper payments cited in the report were electronic funds transfers to the bank accounts of deceased annuitants, says Grimes. He adds that OPM has completed 10 steps of a 14-step corrective action plan, and has recouped $438 million of the more than $601 million forwarded to the dead.

The news about OPM's post-death payments didn't surprise Sen. Tom Coburn, R-Okla., who, in an October 2010 report on government waste, stated that the federal government had paid more than $1 billion to deceased persons since 2000.

"Congress has repeatedly failed to give agencies the legislative tools they need to combat this waste, and we have fallen short of our solemn duty to oversee government operations," wrote Coburn in his report.

Also of interest: Scamming the VA. >>